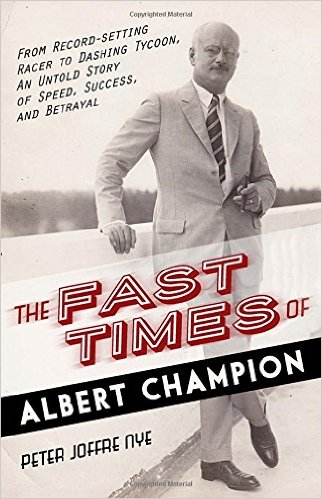 Though most Americans have heard of the companies Albert Champion founded—AC Delco and Champion Spark Plug—few know much about the charismatic man behind them. Like a Richard Branson of the early 20th century, or an Evel Knievel with a business degree, Champion was a powerhouse whose life was defined by both speed and success.

Champion rose from poverty in Paris to great wealth and fame in both his native France and the United States. As a bicycle racer, Champion set more than a hundred world records. When the urban speed limit was 8 mph, he was the first ever to drive a motorcycle a mile under a minute. A car-racing crash snapped a leg bone and kept him in traction for eleven weeks. Undeterred, he hobbled out of the hospital on crutches and recovered to win the French national cycling championship.

Automotive history is rife with stories of men from modest working class backgrounds without the benefit of formal education who rose to achievement and wealth by a commitment to hard work and an instinct for opportunities. Henry Ford, Walter Chrysler, Charles Nash, Adolphe Clement, and William Morris are a few whose lives are well known and who gave their names to important manufacturers. Some made their marks in design and technology, others in business leadership, and still more as participants in areas less familiar to the public but fundamental to the growth of the industry. Albert Champion must be considered as one of those.

Champion was born in Paris in 1878, son of a coachman and a washerwoman, and left school at the age of twelve to assist his mother, then widowed, in supporting him and his two brothers. Like so many young men at the time he was soon smitten by the latest fad, the bicycle. Self-reliant and a natural showman, he made a living by stunt riding then moved on to amateur road racing. His victories brought him a place with Clement Cycles, then the most innovative of bicycle manufacturers. Racing on weekends and filling in at the factory during the week, he was taken under the wing of Adolphe Clement and exposed to the fundamentals of business and publicity. He was soon winning races of national and international importance.

When cycle racers changed from pedal-driven to motor-powered pacers, Clement began to equip his two- and three-wheeled pacing machines with DeDion-Bouton motors. Their electrical equipment including spark plugs was designed and produced by the company itself.

At the turn of the century Champion traveled to Boston at the invitation of Charles Metz, bringing several DeDion-Bouton singles. For Waltham Manufacturing Company he would install his motors to put Metz into the motorcycle business, in addition to gaining additional cycling championships.

With the bicycle declining in public favor, he traveled with Metz to New York to display and demonstrate Waltham’s new Orient machine at the Automobile Show. There he met James Ward Packard of Packard Electric Company, Alfred Sloan of Hyatt Roller Bearing Company and Carl Fisher, who bought an Orient motor-tricycle. The bicycle craze was clearly at an end. In the summer of 1904 he returned to France to compete for the national cycling championship. The final triumph capped his sporting career but, with his body disfigured from numerous crashes, he made the decision to retire at the top of his game. He was 26 years old and had passed the half point of his life.

Champion had been exposed to the world of business through his employment with vehicle manufacturers and he acquired a practical knowledge of machinery at their works and on the track. He decided to set himself up as an importer of French auto parts and reached an agreement with Edouard Nieuport to sell his electrical ignition parts on the American market. Nieuport was an engineer and incidentally a former bicycle racer whose products were earning respect on the road and in the air. In the spring of 1905 Champion returned to Boston, bringing trunks of Nieuport spark plugs, coils, magnetos, and storage batteries. The Albert Champion Company was an immediate success and soon moved to design and produce its own electrical parts. Champion took personal charge of advertising and promotion, traveling to Detroit and elsewhere to demonstrate his equipment to manufacturers and agents. At the Boston Buick dealership he encountered William C. Durant whose company was building the largest-selling car in the nation. By good fortune Durant was not satisfied with the spark plugs being installed on his cars and offered to set up a new company in Flint to produce spark plugs to meet Buick requirements. The plugs would be called AC since Champion’s partners refused to relinquish the Champion name. Along with Weston-Mott Company, Dayton Engineering Laboratories, Fisher Body Corporation, and other suppliers, it became a component of General Motors.

Over the years AC and Champion, Albert Champion’s previous firm, grew to dominate the spark plug market. His fortune was made, but what was his role in the company’s success? He was not an engineer, but he learned from the beginning to employ the best designers and managers to keep the company at the forefront of technological innovation. Alfred P. Sloan said: “The keynote of his success was that he was never satisfied with the product of the job he was then doing. His mind was always open to the necessity for constant improvement.” His competitive instinct on the track was later mirrored in the business world.

Peter Nye has done an outstanding job is this first biography of Albert Champion which comes with full notes, a bibliography, and an index. It is a long book with two thirds devoted to his cycling career and we might have been content with less detail on so many of his racing exploits including the admiring comments of the press. Less detail is given for his business career, perhaps because it was not as fully publicized, and given General Motors’ penchant for secrecy and slight interest in corporate history.

Champion died in 1927 from wounds received in a fight over the wife of a colleague, not the only amorous adventure that blighted his career. You can read all about it in this highly recommended work which throws new light on the drama of those who played in the first acts of the history of the automobile.

This review appears courtesy of the SAH in whose Journal 274 it was first printed.

The Fast Times of Albert Champion: