Joint Strike Fighter: Design and Development of the International Aircraft 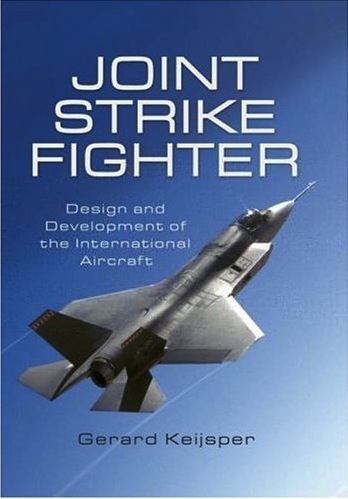 Over the last 60 years the US, European, and Russian aerospace industries spent the equivalent of many hundreds of millions of dollars to satisfy the military strategists’ dream of combining the best features of several different planes into one do-it-all aircraft. Gerard Keijper’s excellent book tells the story of how the US aerospace industry took many ideas, some good others improbable, over a quarter century of model and wind tunnel testing to create, after many iterations, a viable supersonic vertical take off fighter: the Lockheed Martin F-35 Lightning II. This single-seat, single-engine stealth multirole fighter can perform close air support, tactical bombing, and air defense missions and will be built in three versions: conventional takeoff and landing, a short take off and vertical-landing variant, and a carrier-based variant.

This is not a glitzy guided-walk-around-the-plane coffee table sort of book. Beginning with a summary of the competition between Boeing (X-32) and Lockheed Martin (X-35), this book covers all facets of the program history (technical, schedule, financial, contractual, political) up to the time of publication, 2007. The first flight was in December 2006 after demonstrators first flew in 2000. Much has happened since 2007 and despite the rising costs, delays, and political and technical problems that slowed down the program it now appears to be on track once more.

Keijsper started gathering material for this book right after the JSF was first planned in the early 1990s and has received help from all the international companies involved with the F-35. The book has none of the usual explanations (such as an Introduction) as to the author’s background, interests, or qualifications (he did publish Saab Gripen – Sweden’s 21st Century Multirole Aircraft in 2004), sources consulted etc. While the F-35 project is international in concept it would not be wrong to say that Keijsper emphasizes British aspects of the program. The book is as much a tour de force as the technology behind the subject it covers. Well and lucidly written it will still leave the casual reader rather severely taxed by the vastness of the detail. On that score, consider that the book contains ten pages of abbreviations! And while there are eight appendices, they are mostly no more than a page long and list such things as test protocols, people, contractors, production records, ground and flight test schedules, and specs with three-plan views. (Outsiders don’t normally see what’s shown in appendix 7, a list of all the other aircraft that were used as test beds in the JSF program, something called Technology Risk Reduction.) Considering the amount of detail we know the book to contain, the index seems unexpectedly low-key. The photo captions are quite extensive and list sources. And while there are many illustrations they are, inevitable given the book’s format, on the small side. Another thing that’s rather small is the type size; old beady eyes be warned.

Joint Strike Fighter gives the non-expert some idea of why today’s high-technology aircraft cost so much. The need for wide-ranging testing of all the aircraft components to ensure reliability, the highly complicated electrical systems, and the development of the main propulsion engine, and last and not least the need to prove a viable ejector seat system for the pilot. The JSF is a piece of kit worth knowing about, and of the several books on the subject this one is probably the most thorough and multi-faceted to date.

A Technical & Operational  History of the Liberty Engine: Tanks, Ships and Aircraft 1917–1960 »
« The Book of Air Shows