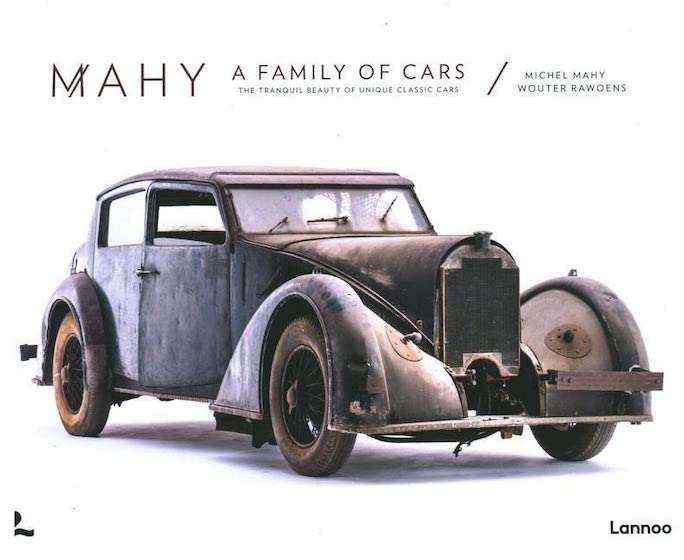 “Row after row of abandoned factory halls in the rolling hills of Belgian Hainaut. A long-faded festival of brick and red-painted steel, sandwiched between a rusting railroad track and the tarmac of a road leading nowhere. Nothing is made here anymore, nothing except motoring history. There is an all-pervading smell of rust and motor oil. The only sound is provided by the slow drip-drip of a leak in the roof. In this dusty interior, in hall after hall, hundreds of classic cars stand bumper to bumper.”

If you know nothing about the Mahy Collection, that quote, and that cover photo will give you if not a misleading then an incomplete idea: that everything shown here is a basket case. Even if, unrestored cars in original condition yield essential information to restorers that is not obtainable any other way.

You know your Voisins and Delages and BMWs, maybe even early makes like Rochet-Schneider, De Dion-Bouton or Panhard & Levassor, but what about Philos, Le Zèbre or, c’mon on now, Maurice Badaroux?? The latter has the highfalutin’ model number “501” but this Bugatti lookalike is a home-built one-off, and the Mahy Collection is the one place that has it. Not everything in this book is on public display, making the book the one place to see such exotica.

This book will give hoarders ideas . . .

If that isn’t enough reason to be curious about this book, consider a whole ‘nother angle:

“Almost a century after the dispute between great-grandfather Louis and his brothers, a new family feud was about to break out. Ivan and Michel had different views on everything. On every nut and bolt to be tightened. On every invoice to be paid. At first, they continued to exchange pleasantries, but after a time they hardly said a word to each other, not even to say ‘good morning.’”

Drama, of a deeply personal kind. Michel being the son of Ivan who was one of the sons of Ghislain who started all the hoarding, ahem, collecting, who was the son of Louis with whom that quote starts and who was already two, often cantankerous generations into a flourishing metal/steam boiler business founded in 1869. And Michel (b. 1965), to hone in on this book he co-authored, is since 2015 the chairman of the Mahymobiles organization and curator of the collection.

Getting drawn in by the many, many photos it is too easy to forget that all this stuff—passenger cars, commercial vehicles, bikes, motorcycles, aircraft, parts—came at a cost. How did these dysfunctional people get anything done? Well, the book offers a glimpse, shedding light, too, on the post-WWII stirrings in Belgium, specifically with an eye towards the emerging second-hand market, and the freewheeling years of anything-goes economic and political reshuffling. It is difficult to remain wholly sympathetic towards Ghislain (d. 1999) and his many shady deals but that is not the book’s purpose anyway—“shed[ding] more light on a selection of the unique vehicles” is. This takes the form of showing a bit of the backstory to select cars which are presented in chronological order. There is neither a Table of Contents nor an Index, so . . . Happy Hunting.

The reason for showing this otherwise unremarkable page is to illustrate the point that the people who come together to produce this type of book (i.e. wide-ranging contents and relying on secondary sources) mean well and cannot possibly be expected to know everything about everything. This is a 1936 Phantom III, chassis 3/AEX38 (the slash is not normally used). Rolls-Royce folk would right away zero in on the “EX” part and say this was an Experimental car. And so it is, having been ordered by the firm’s Sales Department as a demonstrator (as chassis 38EX) specifically with an extra long all-steel limousine body to demonstrate this V12’s capabilities. It is, in fact, the only such lwb P III. Another thing that distinguishes this car is that it was the French trials car in Paris, 1936, and then did a tour of duty in the firm’s School of Instruction before being shipped on consignment to US distributor J.S. Inskip. In other words, this car has always been well known within Rolls-Royce—so how plausible is it when the text says that R-R when asked about the identity of this car considered it a “lost” P III not heretofore included in the chassis count, and made overtures to buy it back, or that it was the Mahys later discovering by chance a photo of it in a 1936 car magazine that finally told them what they had?

This could have been the People’s Car. This Mercedes-Benz 130 H was designed by Ferdinand Porsche’s successor as chief engineer but rumor has it that Porsche had some influence on the design.

Surely this cannot remain the only book about the Mahy vehicles which by now must number north of 1100. In particular the 230-odd restored creme of the crop vehicles that became in 1986 the foundation of Autoworld Museum in Brussels would deserve a proper catalog (although its inventory never remains fixed as vehicles are rotated). Only 6 of the 18 halls of the Mahymobiles museum are open to the public, showcasing about 300 cars, mostly roadworthy, and little is known about their in-house volunteer-run restoration activities.

The intro quote refers to the smell of rust and motor oil; it doesn’t take much effort to pick up a whiff of that in the photos by Wouter Rawoens who is also credited as “the creative inspiration behind this project.” That the (landscape format) book is printed on matte and not glossy paper only contributes to the ambience, as do the smartly (read: sparingly) lit photos. It is also noteworthy that this Belgian book reads exceptionally well in English—and let’s not ignore that low price!

A toast to a very fine book! This is a 1959 Opel Blitz if you’re wondering. If you ever watched, say, the Tour de France you’d recognize this truck.

Big Wings: The Largest Aeroplanes Ever Built »
« I Kept No Diary