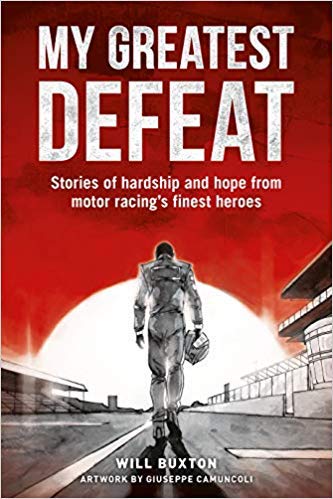 The careers of many racing drivers are defined every bit as much by their defeats as by their triumphs. Who can ever forget the sight of Nigel Mansell’s left rear tire exploding at Adelaide in 1986, losing him the world championship that was almost in his grasp? Or Luis Antonio Massa’s very public agony when Lewis Hamilton’s overtake in the last lap denied Luis’ son Felipe the championship he was destined never to achieve? And whilst Takuma Sato won the Indy 500 in 2017, that victory will never quite assuage the drama of his doomed overtaking attempt of Dario Franchitti in the 2012 race. Will Buxton is to be applauded for mining the rich seam of loss in this book in which he interviews twenty drivers about their greatest defeat. Many are best known as Grand Prix drivers but other disciplines, including NASCAR, Indy cars, endurance racing, off road events and rallying are also represented.

The 336-page book is pleasingly designed, with the look and feel of something way north of its modest price point and, in the opinion of this reviewer, the lack of a dust cover actually enhances the book’s heft and quality. There are no photographs, but each chapter is accompanied by an illustration of its subject drawn by Giuseppe Camuncoli, the Italian comic book artist best known for his Marvel Comics depictions of The Amazing Spider-Man, amongst other superheroes. It’s an original approach and, if the cover illustration did not raise my expectations, the depictions largely succeed in capturing the essence of their subjects. I especially liked the way in which Mario Andretti and Ari Vatanen’s very distinctive features and ethnicity were shown but I found the Felipe Massa portrait almost anonymous, while Emerson Fittipaldi’s veered close to caricature. I wonder if Brazilians perhaps present special challenges to accurate portrayal?

But this book’s quality should be judged on its text and, with only a couple of caveats, it succeeds in its objective of presenting the personal (and often very intimate) impact of defeat on its subjects. Buxton takes the same approach with each interviewee, firstly by providing a brief career summary and then following this with what appear to be almost verbatim replies to his questions. I am assuming the “almost,” as only the rarest interviewee will provide answers that will not require some deft editing; however Buxton has applied the softest of touches in this respect, as the character and idiosyncrasy of each driver remains undimmed. The real pleasure in reading the book is the realization that, although the drivers might share a profession, it is one that attracts a wide diversity of personality traits, ranging from the brutal self-analysis of that most cerebral of drivers, Damon Hill, to the tough guy pragmatism of a Jimmie Johnson.

Will Buxton is a well-known and accomplished journalist and his commentary was a feature on the much lauded Netflix “Drive to Survive” documentary about the 2018 Formula 1 season. His contribution added insight and color, perhaps especially for those less besotted with the sport than your reviewer. Because I learned about motor racing in the 1960s and ‘70s, I am most comfortable with a rather different style of journalism to Buxton’s, which naturally personifies the contemporary style of F1 reportage. So I will confess to the occasional frown and pursed lip when reading the book. Schooled by hardnosed racing journalists such as Denis Jenkinson and Nigel Roebuck, I incline to the view that only the most exceptional racing drivers merit uncritical adulation, with many drivers being just as flawed as the rest of us. So I did find Buxton’s prose sometimes being a little too starry-eyed, with words such as romance, passion, legend and hero peppering the author’s own insights rather too often for my own more jaded palate. But I can forgive this trait because, whilst placing drivers on high pedestals can compromise objectivity, here the drivers are given the opportunity to appraise themselves and that is what makes this book such an insightful read.

The nature of the defeats ranges from the relatively mundane to the traumatic, the catastrophic and the psychological. I’ll take the mundane first; after his marriage, Jeff Gordon became estranged from his parents and, when he realized his wife’s behavior was the cause—“I decided to change my life . . . and I said ‘Mom, I need to come home.’” I don’t doubt that Gordon had a tough time, as so many do when a marriage goes awry but, compared to the catastrophe that hit Niki Lauda, it is an almost quotidien experience. Lauda’s horror wasn’t his life-changing Nürburgring crash in 1976, in which he came close enough to death to having been administered the Last Rites, but the Lauda Air crash fifteen years later, in which 223 died. After having established that the Boeing representative had seen plane crashes before, Lauda asked him “’Give me some advice on what we will see.’ But nothing prepared me. . . . This, I will never ever forget.”Lauda’s story of confronting Boeing about the cause of the crash, and pursuing the truth with his trademark determination and rigor, epitomizes Niki Lauda the man.

The book starts with the story of Alex Zanardi, because the subjects are listed alphabetically by forename, and I have to confess that I wish the more conventional listing by surname had been adopted. Given Zanardi’s inspiring fortitude after his Indycar accident at the Lausitzring in 1999, I hesitate to comment that his story was far from being the most interesting in the book, with rather too many gnomic statements, such as this near opaque reflection  “Is the reality what you want? Is the dream only a dream? Is the reality completely different to the dream you have created?” But perhaps I am being unfair, as who could judge Zanardi’s story as being anything less than inspirational? This is the man, after all, who after twice winning the CART championship, lost both legs and then not only successfully returned to motorsport but also forged a second glittering career as a medal-winning hand cyclist in the Paralympics. It speaks highly of the book that despite Zanardi’s life story resembling a Hollywood script, it’s a long way from being the most interesting here.

It is the soul-baring testimony of two drivers, Damon Hill and Ari Vatanen, that I found the most riveting. As readers of Hill’s superb autobiography, Watching the Wheels, will already know, Hill the driver was in huge contrast to the uncomplicated tough guy swagger of drivers like Bobby Unser (“Sometimes you got your tail busted up a little bit, but you just had to get fixed up as quick as possible.”) Here is Hill on the gulf that separated the single-dimensional British hero which the public demanded and the man himself: “You know, what if actually I wasn’t out there racing for everyone else? It’s not that you’re racing for Great Britain. I wasn’t. I was doing it for myself. Me first. My family first, actually.” The clichéd narrative that the press perpetuated was that the introverted Damon lived his life in the long shadow cast by his late and larger than life father Graham. The story of the teenager who had lost a father, who was regarded as a national treasure, in the most horrifically public way but who then, against all odds, went on to outdo his father’s achievements almost wrote itself. It was rich pickings for every amateur psychologist hack even if, as Buxton reveals, it was just lazy journalism. Here’s Hill on his father: “You talk about getting out from the shadow, but what shadow? … Graham Hill wasn’t a shadow to me … [he was] a hero … Why did I carry the same crash helmet? Because I was proud of him. Not because I wanted to beat him. F***k that. I wanted to add to his legacy.”

Vatanen’s story is perhaps the most compelling of all, not least because it is recounted by such a fiercely self-analytical narrator. During the Rally Argentina in 1985, Vatanen crashed his Peugeot 205T16 and suffered near catastrophic injuries. The story of his recovery, and his subsequent battle against his delusion that he had contracted AIDS, is told with brutal honesty. Here is Vatanen on the mental impact of the accident: “… I was absolutely like a shivering dog. I was like a leaf on a tree. The slightest breeze and the leaves start vibrating … I was completely overcome with fear.”And the man who, just three years later, went on to set a new Pikes Peak record and who later became a member of the European Parliament gave Buxton this insight into his near death experience: “It is hard for us to accept that we need defeat. We need setbacks. We are not omnipotent. I have learned the most from those who have cried a lot in life.”

Despite some initial reservations, I did not just enjoy this book but I obtained new insights on its subjects from the fresh perspective the author elected to take. Perhaps even more significantly, I was moved emotionally by many of the testimonies, and those aren’t words I often use in the context of books on motorsport. Not everybody had as riveting a story as a Hill or Vatanen, however, and the interviews with Sebastian Loeb and Mika Hakkinen offered slim pickings for this reader. Most (but not all) of the interviewees were active within the sport in the last two or three decades and, if a second edition is contemplated, I can think of a number of anciens pilotes whose stories need to be told before we lose them, the men such as Richard Attwood, Vic Elford, Jackie Ickx, Don Garlits, AJ Foyt. I would also have loved to have read an interview with Michele Mouton, the woman who tamed the Group B Audi Quattro on the world rally stages before whupping some redneck ass at Pikes Peak.

These minor cavils aside, this is a fascinating book which I recommend to the motorsport enthusiast who is interested in the stories behind the statistics and who wants to obtain a profound insight into just what makes a racing driver tick.