The Birth of the Royal Air Force 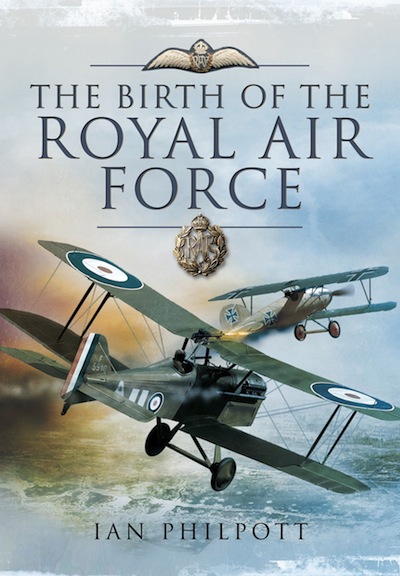 “With the benefit of hindsight one can see that victory in war has never been achieved solely through the use of air power but in the early years of the twentieth century air power was a new, and for some, a frightening new development in war, involving as it did civilians far from the battlefield.”

The lengthy subtitle makes clear the purpose of the book: “An Encyclopedia of British Air Power Before and During the Great War – 1914 to 1918.” Considering the author’s previous opus, the two-volume The Royal Air Force: An Encyclopedia of the Inter-War Years, it is obvious that this new book is the prequel to the other and that its existence was pretty much inevitable because Philpott would have had to do the research anyway.

While the RAF is indeed the oldest independent air force in the world it is, more importantly, the first air force to become independent of army or navy control. This is a useful realization to bear in mind so as to better appreciate the peculiarly British friction among the services, a situation that has caused real problems and real failures even into the WWII era.

As a career RAF man, Philpott on the one hand admits to passion for his branch of the service while insisting on the other that he is capable of proper scholarly detachment. No reason to doubt either. It may be argued that his RAF indoctrination precludes him from properly allowing for the cultural differences among the two ancestral air services from which the RAF was formed, the Royal Flying Corps and the Royal Naval Air Service. The topic is not explored in this book and, being a complex one, easily warrants a separate treatment. It does, in any case, have no objectively detrimental impact on Philpott’s stringing-together of the story. No one, on any side of the argument, could find fault with him starting the book with the emphatic statement, returned to often throughout, that the turf wars in British government and industry caused delays and lack of clarity in terms of strategic posture and objectives. To the reader who seeks to really understand behavior, choices, cause and effect with global consequences, this is a tremendously important issue.

For the purposes of this book, all the reader needs to internalize is that it was an external event that forced the British to accelerate developments that were already underway and start one armed service that would consolidate all air activities—a stand-alone air force: the German bombing raids of 1917.

Philpott devotes roughly a third of the book to Operations, another to Organization, and another to 12 Appendices. He is an engaging writer, able to offer profound thought in fully fleshed out prose. The book delivers what it promises: “This encyclopedia seeks to capture the spirit of the very early days of flying whether it be in a balloon, dirigible or airship or a powered flying machine with wings, to take the reader through a world of war where aircraft will leave their stamp on the conduct of war.”

Where the otherwise precise writing seems weak is in his short Foreword that says the same few things three different ways, appearing as if cobbled together from multiple drafts whose final form escaped editorial review.

The book has an exemplary Index, and this is vital. In the first book, which had an equally impressive one, Philpott went so far as to say that he didn’t want the reader to have to look anything up. Both books present themselves as “encyclopedias” but this is not to be understood as keyword-driven entries in alphabetical order or the like. The book is divided into broad topics (cf. “Technical and Supply Matters”) with multiple sections (cf. “The Siege of Kut”) containing much narrative. Inevitably, the Index will be the primary starting point for searching for a specific detail and even when not, a reader would have to have pretty good knowledge of the subject matter to pick what section is likely to contain what detail.

One of the Appendices partly overlaps with the earlier book. This is the “Aircraft Technical Specification Sheets” material that describes 82 aircraft in alpha order, and herein lies a head-scratcher. Spotchecking aircraft covered by both books reveals that in a few cases the descriptions are largely similar (cf. Bristol F2B) and in others totally rewritten (cf. Blackburn Baby). From the latter we postulate that the author must have found access to newer, better information since the earlier 2005/08 book, and that this is also the reason that certain matters of micro detail are now different, such as the Armstrong Whitworth FK8 whose length is now 5 inches more than before! By and large, the new descriptions are more, well, descriptive, possibly with somewhat larger emphasis on operational details. Ideally, you’ll have both books, plus many others, and then you can suss out on your own why, for instance, the aforementioned FK8’s engine output is listed in the new book as 120 hp and in the old one as 160. Both are correct, but the 120 was only the early version.

Big-picture thinkers will want to ponder two of Philpott’s points: “It is a common belief that the aircraft went to war solely as a means of reconnaissance with little thought given to the arming of aircraft or their occupants. Nothing could be further from the truth.” The other one has to do with the doctrine of strategic bombing, championed by the first and longest-reigning Chief of the Air Staff, Hugh Trenchard, a misunderstood figure to this day. This doctrine was the inevitable result of the spectacular advantage of the manned aircraft over any other then possible means of munitions delivery, culminating in the V Force of the Cold War era—but a controversial tactic from the beginning.

Not a cheap book, to be sure, but you’ll be richer for having it.

The Birth of the Royal Air Force