The Winners Book: A Comprehensive Listing of Motor Racing Events 1895–2009 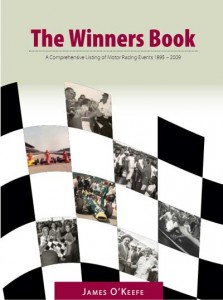 Heads-up motorcyclists, this book is for you too.

Few of the customary book review parameters apply to a book full of names and numbers—no, not the telephone book but something of similar usefulness. If you follow any sort of racing with any sort of regularity it’s only a matter of time until you can’t recall “who’s on first” in a particular year or event. (Now, if you need to know who came 2nd, let alone 18th, even this book can’t help you. Note the word “winners” in the title.)

This book documents the results of 22,000 “major” races over more than 100 years all over the world. Even if you’re into some unusual stuff—Japanese Formula Libre? 1916 Chicago Derby?—it’s all recorded here, provided the event meets certain criteria.

O’Keefe, retired from teaching school now for nine years, has squirreled away race data for over four decades. Initially his intent was to address the hole he perceived in the record-keeping of American racing by compiling a database. Doing the research, consulting sources, and sifting through race reports inevitably led to the realization that he might as well produce a book of international scope. Prior to publishing his own, O’Keefe’s data has been a resource to any number of other people’s books.

Principally, the book is divided into eight car chapters and one on motorcycles, each presenting events in chronological order. Each of the car chapters is devoted to one particular type or category of racing, from premier to lesser formulas and including sports, stock, and Trans-Am/IROC/Touring Cars. The extraordinarily detailed Table of Contents will be your navigation aid here. Each chapter uses a unique dominant color in its tables, facilitating orientation. Certain categories (cf. F3, midgets, most sprint cars, Formula Junior) are excluded, for reasons of space. The author expresses his desire that someone else may tackle those subjects.

Each chapter’s core data listing begins with a few introductory comments followed by a list of all champions in the respective series; dates/classes/formulae pertaining to the series; and ends with notes. The photos scattered throughout are best thought of as secondary to the text (all are credited, most are captioned, and quite a few are from various collections held by the publisher). The motorcycle section follows the same basic layout and covers major GP and Moto GP races and major American pre-WW II races.

Before delving into the following remarks, let it be clearly said that this book represents a monumental undertaking. The world is a better place for having it. Serious motorsports enthusiasts, writers, and historians will come to regard it as a critical tool. In comparison to the amount of work that went into it and the use you will derive from it, the price is laughably low.

Now. The book’s Introduction says “the format should be easy to grasp.” And it is as far as presentation of data is concerned. But in terms of organization, a few words of explanation may be helpful. As to the former, all listings state in ascending year order in uniform, tabular manner date of race, name of race, location, number of laps, overall distance in miles, winner, chassis/engine, winner’s time, average mph, and winning speed. Such uniform presentation is of course ideal for making comparisons. However (and in no way to be taken as criticism but merely as a pointer), the absence of further commentary requires of the reader to either think about what he is seeing or to know some background. To illustrate: p. 44/45 lists the 2009 F1 Sepang total race time as 55:30. Compare it to 2008 (1:31:18) or 2007 (1:32:14) and you would notice a ca. 35-min. difference. But lacking an explanation you wouldn’t know that the 2009 race was stopped due to heavy rain (which also meant that for the first time in 18 years and only the fifth time in F1 history, an F1 race failed to complete at least 75% of its intended distance and so only half points were awarded). Meaning? Raw data is good and necessary, but difficult to interpret without context.

On to the matter of organization. For example, the Table of Contents shows that the F1 results are “interrupted” twice by the insertion of F2 and Intercontinental results. The introduction to the chapter explains the reasons, which, if nothing else, serves as a reminder to read the fine print. Much trickier is the matter of Le Mans, which is not explained and will likely catch even the astute reader unawares. From the TOC one would deduce from this event’s one and only listing (p. 328) that coverage is limited to 1993–2009, with no mention of previous years. It turns out that all the previous races, back to 1923, are in fact listed, elsewhere in the same “Sports Cars” chapter, but each under the respective years. The reason for this division is that 1993 marked the first year that GT-type cars were allowed to race again at Le Mans since the initial creation of Group C, which was then in decline. The Index, incidentally, would be of no help here as it lists only people (but very thoroughly, taking up some 20 pages). Also not explained is why no Le Mans entry states the number of laps. And anyone already familiar with the convoluted and fluctuating system of Le Mans categories needs to know that only the overall winner is listed, not the winners of the various indeces.

Long story longer, even the quintessential Swiss Army knife that does many jobs well should not be expected to do all. The reader to whom the value of a book such as this will be the most obvious is the serious researcher or historian. That would also be the first person to raise the obvious limitation of data in printed form: updates. And there is another: searchability. No worries, an annual DVD will provide that. The first one will appear in early Spring 2011 and contain the 2010 season; it will ship with the book, at a yet to be determined package price. After the first year, the DVD will be available as a stand-alone product each Spring. The DVD will run on PC and Mac and contain the program necessary to view and create complex searches of all of the data.

A Bibliography indicates relevant sources for further reading and independent research and includes even websites.

The book is made to be used and last: wear-resistant cover, acid free paper, sewn binding, heavy enough cover boards to support the weight of the paper—even a bookmark ribbon. This is not the first, or only, Racemaker Press book we have reviewed here. It bears repeating that this highly specialized, small, private publisher’s goal is “to provide resources, management, and opportunities for scholarly works in the field of automotive history that might otherwise not be published.” This book is a perfect example of a work that while important would have had a hard time finding a mainstream publisher. Books like this can only continue to be published if someone buys them. You know what to do.

Art of the Hot Rod »
« The Lamborghini Miura Bible