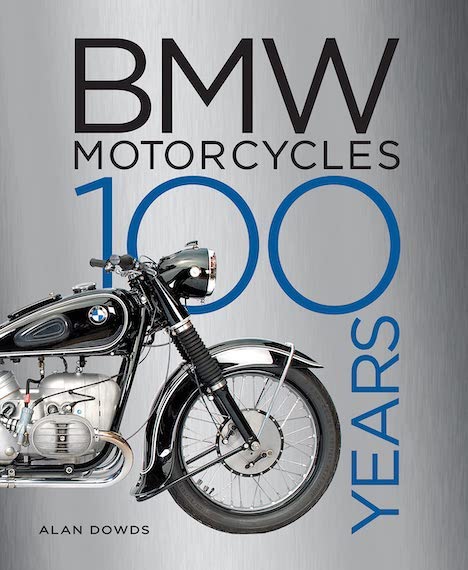 “When I started riding in the late 1980s, the BMW badge held little appeal for me, an eighteen-year-old biker in Glasgow, Scotland, obsessed with Kawasaki GPZs, Yamaha FZRs, and most of all, Suzuki GSX-Rs. Those sexy high-powered sports bikes ranked alongside supercars like the Toyota Supra, Canon’s cameras, and Sony’s audio systems as symbols of the might of Japanese design and engineering.”

Whether you’re into motorcycles or not, you’ll recognize some of those consumer products above, and you’ll appreciate right away what the author’s frame of reference will be. Clearly this is someone who had a change of mind if not an epiphany along the way, so much so that he is moved to add a BMW book to his three Superbike books and hundreds of magazine/web articles. 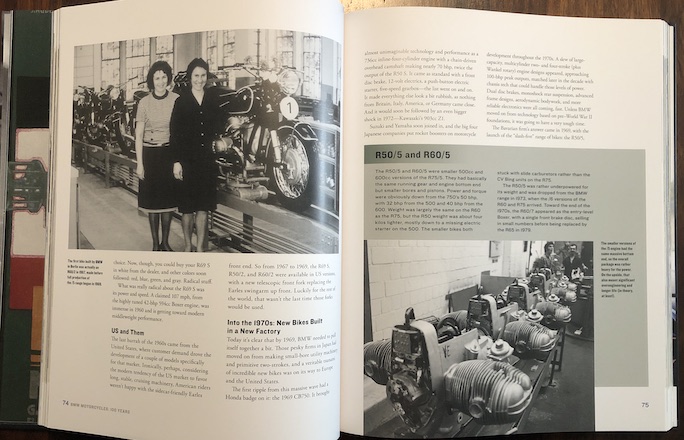 If the book was published in 2022, and if it commemorates a centenary, it must mean that something important happened in 1922. Well, BMW’s corporate historians date the birth of the company to 1916, the year Bayerische Flugzeugwerke went into the aircraft business. There already was a BMW that stood for Bayerische Motoren Werke but that’s not the company we know today as BMW. But they’re all connected . . . and . . . however . . . and then . . .. There are many skins to this onion but the one thing that did happen in 1922 is that one of the major shareholders, said to be the wealthiest man in Europe during WWI, wrote a big check and thus decisively altered the future of the company of which he became president until the mounting global financial crises brought him to his knees. Not a single book exists about this towering financier/industrialist/speculator/patron of the arts, and this one skips over Camillo Castiglioni although it does provide a brief overview of the BMW origin story. 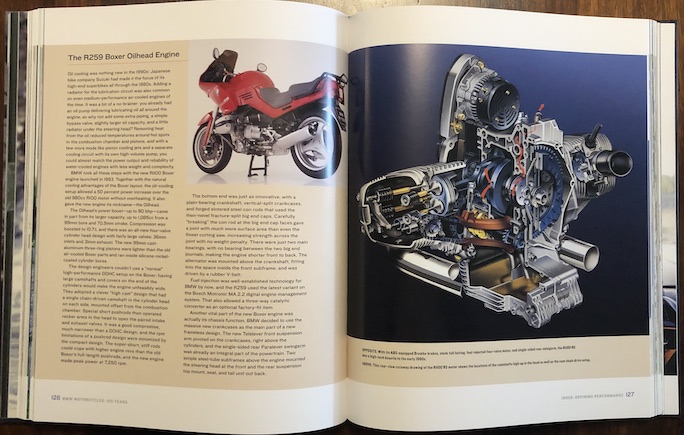 What this book does do, and does well, is examine the motorcycle side of BMW. Many books have done that already but what author Dowds brings to the table is that he’s been writing professionally about motorcycles since 1994 and in that capacity has road-tested pretty much every BMW motorcycle made since then. More importantly, he has also ridden pretty much every other motorcycle since then, and even more importantly, he was not at all a BMW man when he started out. What all this means is that him being a fan today has to make an impression on the reader. For instance, the “value for money” factor plays a key role in the fortunes of a premium brand that commands a premium price and Dowds deftly compares apples to apples, highlighting again and again the extent to which BMW has been a leader on the technology front (Dowds calls it “an obsession with innovation”): ABS, traction control, electronic suspension, gearbox quickshifters, LCD dashboards, trip computers and today’s/tomorrow’s whizzbang tech, self-riding motorcycles. Even the early bikes offered unconventional solutions—and proved themselves. In that sense, the book is more a case study than an encyclopedia, and there are, for instance, no spec tables but plenty of sidebars describing the operation of components. Tech and specs are worked into the overall narrative, supported by cutaways, tech drawings, and lots of thoroughly captioned photos. 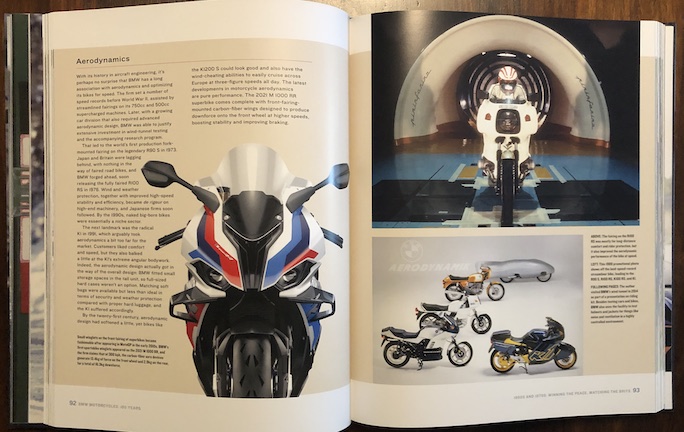 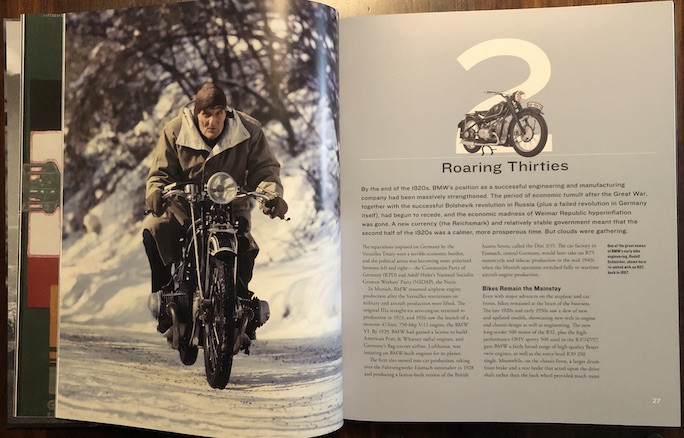 Just the image for evoking the early days of motorcycling: an old guy in winter garb undeterred by the elements flogging his trusty steed through the woods. It only makes the image better that the fellow is engineer and racer Rudolf Schleicher who played a crucial role in the success of BMW motorcycles (also cars). The photo is dated 1987, the year Schleicher turned 90, but what the book won’t tell you is that the location is the Mittenwalder Steig in the Bavarian Alps—the very hill climb where in February 1924 Schleicher pocketed the marque’s first motorsports win. Take a closer look though: is the rear wheel actually on the ground? is the front wheel actually rotating? are there tire tracks in the snow? Is this a real photo or a composite?? Schleicher really was there, posing for shots with an R37, but did he ride it? He won’t tell—he died two years later.

Dowds’ familiarity with other marques lends his analysis and comparisons authority; that said, he would be the first to insist that choosing among motorcycles has to allow for many personal factors (cf. body dimensions, the weight of the machine).

Readers who are not already riders will also come to understand how restrictive an envelope the basic architecture of a motorcycle is—unlike a car, you can’t make a bike ever wider, longer, lower to fit new tech or aero or even bodywork. On that score, too, Dowds makes an uncommonly good case case that BMW’s bikes represent a level of consistent engineering and design competence that allows today’s models to use the same basic layout as the very first ones: air-cooled flat twin, shaft drive (as opposed to the much more common roller chain and sprockets), steel-tube frame. 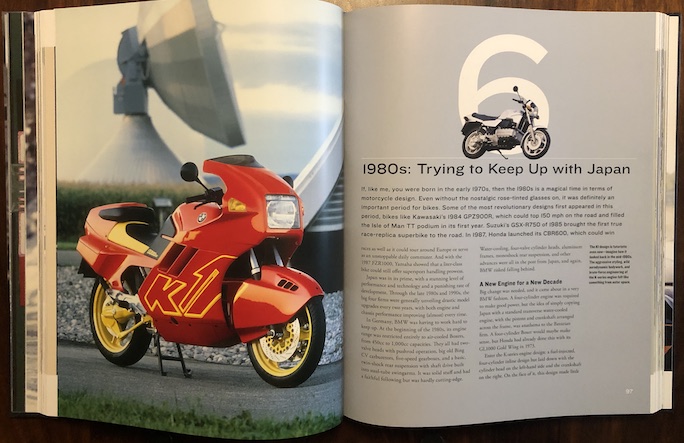 Crisp book design, good paper, trick printing, oversize. All this for a mere $60.

The “value for money” equation applies to books too and this one clears that hurdle with room to spare. In fact, readers who know print technology will surely wonder how the special glossy coating on some photos was achievable at this price point. Sticklers will carp about a few typos, the most glaring being the wildly wrong spelling of Villa d’Este as “Villa Des” which will mightily aggrieve BMW which has after all been the Concorso’s lead sponsor since 1999.