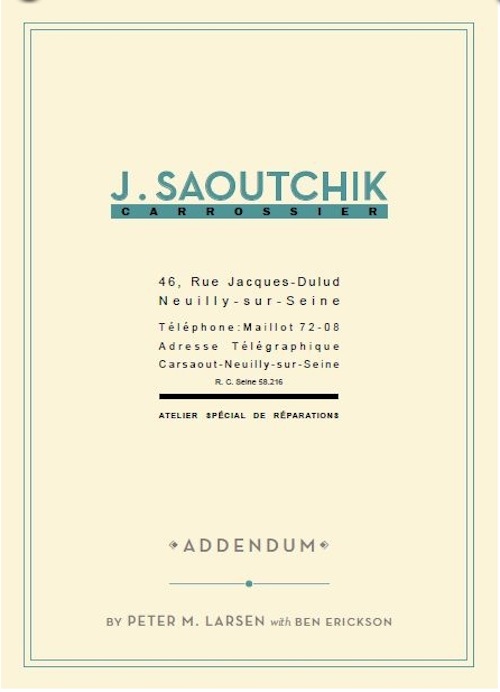 It’s every author’s greatest fear . . . you slave over a manuscript year after year, you leave no stone unturned, you finally commit your thoughts to paper and tell the printer to go-go-go—and then something staggeringly unusual / important / newsworthy happens.

On the other hand . . . the true scholar lives for just this sort of thing, and Larsen is nothing if not serious about advancing the body of knowledge. It just doesn’t usually happen this quick.

The 3-volume, 1164-page set to which this fourth installment is an addendum was warmly received and showered with awards handed out at such speed that one wonders if the award-givers actually had taken the time to, you know, read this Magnus Opus. Which is not at all to say the awards are not deserved but that there is a certain capriciousness to these things that can only serve to frustrate those whose work was not similarly recognized. If there is a reason to dwell on the awards it is to lay the groundwork for a few critical remarks about this Volume 4: all that heady business of receiving accolades (with Oscar season just behind us one can’t help but recall Mary Tyler Moore’s unforgettable “You love me, you really love me!” outburst decades ago and still being talked about) seems to have created such a rush of can’t-do-no-wrong euphoria that this book was rushed into production without crossing all the Ts.

The rush is perfectly understandable because it seemed to make cosmic sense to be able to present the Addendum to the world at the same time that the key event (there are others too) that spawned it was going to happen, namely the sale at auction of three heretofore believed lost Saoutchik-bodied cars. Obviously those cars needed to be recorded properly in the literature, and obviously the time was now, while the Saoutchik book was still on everyone’s radar. By the way, if this review whets your appetite for the main set, be prepared to write someone a big check: it is sold out (500 copies at an original MSRP of $500), ditto for the deluxe leather edition of 20. 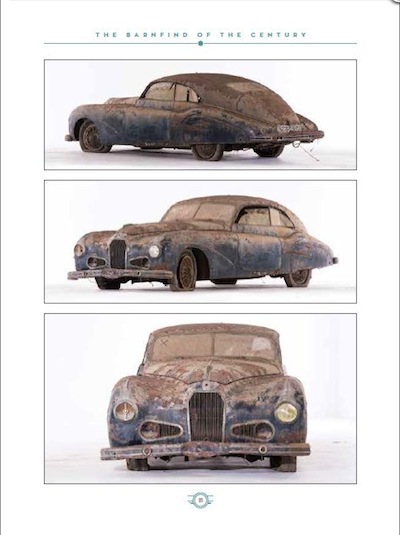 An Addendum is by definition not a fully fleshed-out monograph and its 66 pages can contain only so much. Likewise, a book review is not the place to dispense automotive history so let’s just say that those three Saoutchik cars were offered by French auctioneer Artcurial Motorcars at the Retromobile show in February 2015 as part of the 60-car-strong Baillon Collection—“the barn find of the century”—that had come to light only in December 2014. Every part of this story is a Big Deal any day of the week, so big that every newspaper from The New York Times to the Guardian devoted ink to it. A key aspect of the coverage was the shocking decrepitude and unconscionable neglect of the cars, something that Larsen does not comment upon. It’s worth its own book but, until such time, a more cohesive account in this, the first introduction of the collection in the serious literature would not have been out of place. So, while one must without hesitation praise Larsen and his publisher for their carpe diem spirit, one must also say that, in the long term, history would have been better served by a more thorough, more rounded, less hasty approach. (For instance, the Baillon Collection is first introduced as that of Jacques B., then, later, talks about a Roger B. and later still mentions in passing that Jacques is Roger’s son.)

Larsen says that, of course, a revision of the main book will incorporate the material in this Addendum, and more—but what if there will never be one?

The three Baillon Saoutchiks happen to be Talbot Lagos, one Grand Sport and two Records. Larsen (and Ben Erickson, whose name we here omit only for brevity’s sake) wrote the definitive book about the Grand Sport model and the corresponding entry there is referenced here, as is, naturally, the main Saoutchik book. 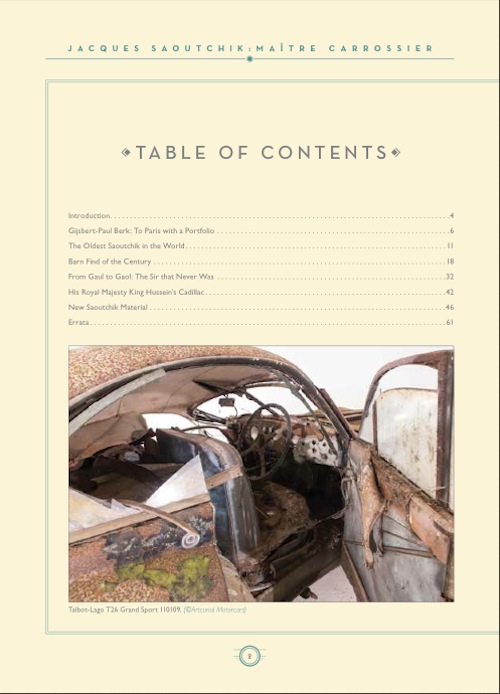 The brevity in the Baillon coverage probably called for other material to be added to justify a proper hardcover book. That material consists of an expansion of the few paragraphs in the main book of designer Gijsbert-Paul Berk’s work at Saoutchik to now ca. 3 pages (useful but still less than the account Berk has given elsewhere); a drastically different appraisal based on research by Nigel Smith of a character introduced in the main book, Sir John Gaul (alluding to such “filth” that Larsen encourages the reader “to feel free to avoid reading about Gaul if you think you might find him too distasteful”); some additional info on Delahaye chassis 815023 and King Hussein of Jordan’s Saoutchik Cadillac parade convertible; 18 pages of assorted Saoutchik material come to light since (or in response to) the publication of the main book; and two Errata items. 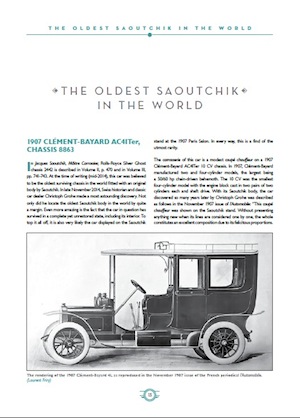 But, wait, there’s more, and this discovery too is as mind-boggling in its inopportune timing as it is in importance: the recent discovery by Christoph Grohe of what must now be considered the oldest surviving Saoutchik-bodied car. While the rush to beat the Retromobile deadline couldn’t have helped, the car’s owner for over 40 years is said to be singularly disinterested in having its story told, forcing Larsen to settle for saying “little is known of the history of this car” and that its “current owner wishes to remain anonymous,” and instead offers a history of the maker, Clément-Bayard, to accompany the period and new photos. Since the car is largely original and in remarkable shape it will surely reappear in the literature in more detail in the future.

To say it once more: one cannot fault the author for his enthusiasm or question his commitment to the cause; while a “bigger” book would seem to be a better vehicle for doing these important discoveries justice (especially is there is no opportunity for a revision of the main book), a smaller book is better than none at all! 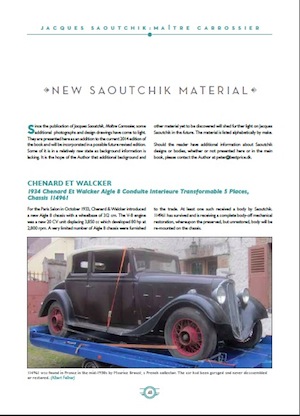 If you want to annotate the three Talbot entries in either the Talbot or the main Saoutchik book with auction results:

If you own the 3-volume set there’s really no point in not getting the Addendum. The publisher is even offering a custom box (the gold embossed solander box that came with the deluxe edition) to house all four books.