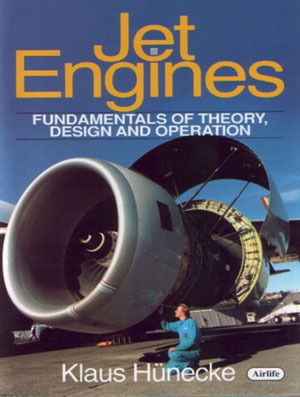 This is already the second English edition of a book that first appeared in German in 1987 (Flugtriebwerke. Ihre Technik und Funktion, ISBN-13: 978-3879434077). Clearly, the audience for whom Hünecke intended his well-written book—a tall order: from general-interest readers to students and practitioners in the field of aeronautical engineering—has found it worthy of being kept in print. Following his own academic training the author worked as a university researcher (vortex flow) and then joined industry as an aerodynamicist, working in first the military and currently the civilian sector.

There being a difference between theory and practice, the purpose of this book is to explain actual working engines as opposed to theoretical models. Frequently drawing analogies to the internal combustion automotive engine, the author explains jet engines in just about all the detail one might wish to know.

Assuming that the prospective buyer of such a specialized book possesses a basic grasp of the subject, this review will go into some specifics. The book is short and small (8.7 x 5.8″) which, obviously, necessitates choices as to what can be included. The purpose of the following remarks is not to find fault with the author’s choices but to inform the reader what to expect. Considering the original publication date of 1987, the following items were well in place by then but are here treated in too much brevity or not at all:

– While it does state (p. 6, #1.2.2) that there is an additional turbine to drive the reduction gear for the propeller in turboprop applications, in many cases this was done by one series of turbines, with the power for the prop coming off the single shaft and the balance (minimal) going out the exhaust, providing a little jet assist.

– In the case of turboprops one of the major controllers is the propeller governor and its control system. This system has to provide a flat blade angle for start-up, propeller pitch lock stops to prevent fining off of the prop if the engine quits, and also removal of these stops under normal operation. The props must be able to go to the “feather” position if an engine fails to reduce drag on that side. As with the jet engine, which uses thrust reverse on landing to reduce the landing roll, a prop has a reverse (negative) blade angle setting to achieve the same effect after touchdown. Many prop systems permit BETA control which allows the pilot to vary prop blade angle to facilitate taxiing. This entire subject was not really addressed at all.

– The book cover shows a Rolls-Royce RB-211 engine and its schematic is on p. 13. Uniquely, this is a three-shaft engine whereas all other high-bypass engines are two-shaft. The three-shaft engine has three separate compressors and three sets of driving turbines. The low-pressure turbine drives the compressor fan and the intermediate and high-pressure turbines drive the intermediate and high-pressure compressors, respectively. This arrangement allows for three different shaft speeds and makes for a much shorter engine and fewer variable guide vanes for the compressors. These aspects could also be referenced in the discussion of high-bypass engines on p. 119 that only mentions GE and P&W engines.

– A minor point but relevant in the context of the author repeatedly emphasizing the need to match a particular engine to a particular aircraft performance profile: p. 17 mentions that both GE and P&W “prepared suitable engine proposals” and that ultimately the GE CF6/34 was adopted to power the DC-10 but omits to say that some airlines did adopt the P&W JT-18D on the same aircraft.

– P. 30, paragraph 3, states that “exhaust products of a piston engine are not usable.” This is inexact inasmuch as these are often used to drive a compressor to “turbocharge” the intake airflow. In fact, one major supplier (Wright Engine Co.) passed the engine exhaust gases (on the Wright 3350, used on the Super Constellation and DC-7) through three Power Recovery Turbines that had a fluid drive to the crankshaft providing ca. 450 shp on takeoff.

– Blade containment (in fans, compressors, and turbines) is an important issue on all engines. Of concern is that the blades, if released, must not penetrate the cowling and go through the cabin skin. This often requires thicker material on the walls of the housings, and in the case of the fan blades, Kevlar is often wrapped around the fan casing.

– High-bypass engines were generally fabricated in modular fashion so as to allow changing on-wing. Especially in the early days this expedited engine repairs in remote locations. In many cases, airlines would have a “spare engine wing attachment” on either a three- or four-engine aircraft to haul a spare or failed engine.

Throughout, the book uses an excellent selection, even if of small size, of pictorial views and schematics. They and the photos are clearly referenced to the text and also have their own, but brief, captions. Both the Table of Contents and the Index are well conceived. Appended are two tables of commercial and military turbofan engines listing make, model no./name, application, components, performance, and weight/dimensions.

Copyright 2010, Ron Jackson (speedreaders.info)
(The reviewer worked for 39 years for Rolls-Royce in Canada and the US, where he retired as Vice-President of Product Support for Commercial Engines.)