The Art of the Racing Motorcycle: 100 Years of Designing for Speed 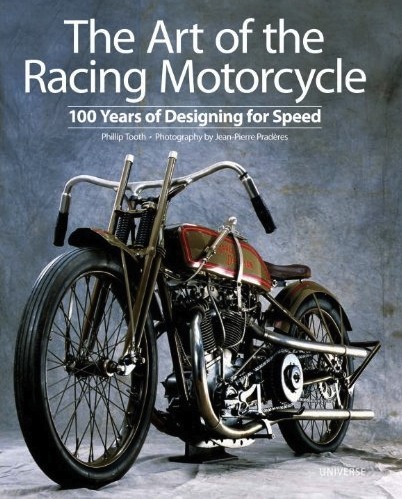 Taking up only a small footprint in a more or less open frame, pretty much everything that makes a motorcycle go is plainly visible, as is the relationship of components to each other. Racing bikes since about the 1950s will of course have fairings or cladding for aerodynamic purposes; in real life these do get in the way of seeing what’s what but in this excellent book, all is revealed.

In general terms, weight and balance dictate that motorcycles are by definition and out of necessity fundamentally non-frilly in terms of components and arrangement.

Veteran UK journalist Phillip Tooth and French lensman Jean-Pierre Pradères have joined forces to present a look at a hundred years of wringing the most out of this requirement. Anyone with an interest in the mechanical aspects of transportation will find much to occupy the mind here, especially on the visual front. Photography buffs too will find in Pradères’ studio images an uncommonly specific and refined photo style, combining restraint in composition and exposition with an uncanny eye for detail and light.

“Along the way there have been as many dodos as there have been eagles, but even if they never really got off the ground, they all added something to the rich heritage of the track.”

From Europe to the US and even Japan, readers of print and online motorcycles publications may well have come across Tooth’s name before as an editor, writer, and latterly as a resource for archival and set-up photography. He works as much in the classic- as in the modern-bike world, something that is evident already in the Introduction to this book where a veritable whirlwind tour of inventors, machines, and countries takes the reader in a few pages from the earliest uses pacing pedal cyclists on board tracks to today’s 240 bhp rocket. Of the 18 pages here only about three are text, the remainder are photos, many of which large (the book is almost 12″ tall) with some even taking up the full spread.

The 50 bikes Tooth picked are as good a selection as any. He calls it “iconic”—which is another way of saying “arbitrary,” which is neither here nor there except that it is not “definitive” as the book jacket insists it is. No matter. The bikes are presented in chronological order, on 2–6 pages each, with (leaving the current still-new decade out) as few as one bike per decade to as many as 11. In the case of multiple entries per year, the order of presentation is, well, arbitrary again (cf. 1969: Yamaha precedes Jawa, Linto, Agusta). Just go with the Table of Contents (conveniently on one single page); there is no Index. Somewhat ill-conceived is the fact that the ToC lists a bike by model and year whereas the actual running head on a page lists year and country. In the aforementioned example from 1969 the reader would thus have to know which of the four bikes was made in which country in order to know on a quick thumb-through what they’re looking at.

The engagingly written individual descriptions combine a little bit about the marque, the model, the technical side of racing, and competition history (in the case of the first bike, a 1902 Manon, even starting instructions). Technical/performance specs are interwoven with the text; there are none of the charts/tables that many readers would surely find useful for quantifying progress or comparing specs. The photo captions highlight technical and construction features and are very specific to the photos. This is especially remarkable in regard to Pradères’ studio shots, making it look as if text and photos were developed by one mind which they were surely not. The majority of photos is of static bikes, augmented with the occasional period action shot or archival material.

Pradères shot the bikes full-frame against canvas backdrops, by themselves, often from both sides or different angles. They are shown fully dressed as well as with fairings and sometimes even tanks and saddles etc. removed to show their guts. A large number of detail shots illustrate specific features, and it is these photos in particular that demonstrate the photographer’s affinity for and understanding of his subject. The contribution Pradères’ photos make to elevating this book cannot be overstated! They are supremely intelligent in what they show and how they show it. Readers from the two-wheel world may have already seen his recent, similar work in his and Jan Heine’s spectacular books The Competition Bicycle and The Golden Age of Handbuilt Bicycles. He also contributes regularly to the French motorcycle magazine Moto Légende.

While the book has a theme, it is best thought of as a collection of individual vignettes with minimal connective tissue. True to its title, it seeks to showcase the beauty in things mechanical rather than being either a gap-less motorsports or design history.

One can safely assume that a book bearing a Rizzoli imprint will have high production values. Paper, binding, reproduction, layout—everything has substance and appeal. In view of the large number of full-bleed photos it is admirable that the matte paper is so fingerprint-resistant. Considering all it offers, one wouldn’t balk if the book cost twice as much.

Ferrari: Stories from Those Who Lived the Legend »
« Original MGA