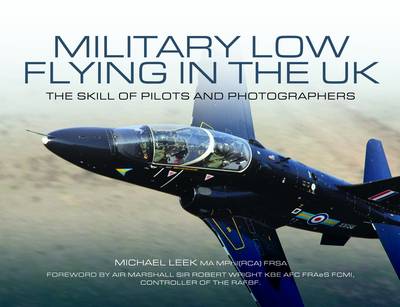 “The adrenaline rush of a few seconds when you experience your first low level aircraft either kicks off an addiction or the long wait kills it dead!”

It’s often said that a pilot’s job consists of hours of boredom punctuated with a few seconds of sheer terror. It’s kind of like that for the photographer who lies in wait for an aircraft too.

The closest thing most of us ever get to a low-flying aircraft is near an airport runway (one of my favorite pastimes as a kid who steadfastly believed hearing loss was only for old folks). Out in the countryside, a military jet at speed coming straight at you is an oddly paralyzing experience and when it howls by 100 feet above your head it rattles every molecule in your body. The shockwave leaves you breathless, literally. So does this book, figuratively.

From modern jets to vintage bombers (Lancaster) to helicopters, Leek shows British and NATO pilots practicing a critical skill. Few places other than the US are large enough to contain military flight training to ranges that can be kept off-limits to the public. This makes the prime mainland low flying areas (LFAs) in Wales, England, and Scotland ground zero to amateur photographers. Conveniently, the UK offers varied terrain—sea, mountains, valleys all within spitting distance of each other and each has its own distinct flying conditions.

This is very much a book by a practitioner for practitioners, or at least aspirants. Photographic technique, equipment, and situational awareness are explained in great detail. The author is a trained illustrator who went on to head the School of Illustration at Arts University College Bournemouth before becoming Director of Studies at Cordwainers College (now London College of Fashion). After juggling academic and commercial work, he finally started his own business in 2008, concentrating on aviation photographs that have been widely published and garnered accolades. It is this relatively recent switch that accounts for the fact that this book is the first on this particular subject.

The book was to have contained commentary from active aircrews but while bureaucratic obstacles prevented any officially sanctioned statements, a number of current and former flyers contributed insights anyway. Leek uses his own photos as well as those of 14 colleagues. A key element in this type of photography is that the photographer be positioned above or at least level with the aircraft and to capture it “land-locked,” i.e. in relation to the surrounding landscape. Obviously, only very specific locations lend themselves to this sort of set-up. This results in totally different images than, say, airshow photos that are usually shot from below, showing the aircraft silhouetted against the sky above. Also unlike staged airshows that always have to keep public safety in mind, real-world military flying demonstrates very different aircraft maneuvers. All around then, this book shows many things few of us ever get to see.

Not only that, this book is, even if only inadvertently, becoming a record of certain aircraft that will increasingly disappear from the skies. Before Leek started this project, some LFAs saw as many as 30–90 aircraft movements a day; now there are entire days “on the hill” with only “blanks.” The reason, in the UK, are drastic defense cuts legislated in 2010. Governments can hardly be expected to keep military planes in service just so that photographers have something to do, and while neither the book nor this review are the place to discuss policy issues, Leek is immensely critical of decisions by “inexperienced politicians” that put at risk the defense of the realm. Be that as it may, the Tornado F3, Harrier, and Nimrod are going to be cut and the Dominie and Typhoon are gone already, and by 2015 Britain will have only three remaining operational RAF fast jet stations. So as to be as current as possible, Leek chose to only include photos later than 2007. This means that the SEPECAT Jaguar, which was mustered out of RAF service that year, is already missing here.

Air Marshall Sir Robert Wright has done the very things described here and thus the Foreword he penned offers useful context for both the flying and Leek’s abilities capturing it. (He is now the Controller of the Royal Air Force Benevolent Fund which will receive a percentage of the proceeds from the sale of this book.)

Leek first discusses his own background and interests, his initial indifference to photography (and his dislike of film!), the impact of digital photography on this genre, the organization of this book, and several of his colleagues. The following survey of the tactical and operational reasons for teaching low-level flying, along with descriptions of the curriculum, aircraft and bases, naturally segues into a criticism of the aforementioned 2010 defense cuts and the dangers of discontinuing constant and regular training.

With chapter 3 Leek literally sets the scene by describing the topographies of specific LFAs. Reading this section attentively yields important insights for better appreciating the fly-past photos that make up the bulk of the book. By definition, these photos are close-ups—sometimes so close that you see the pilot looking at the photographer!—and the background landscapes give little or no context for elevation, steepness, proximity. Only seeing first sweeping shots of hill and dale, the tight canyons out of which aircraft may come streaking up at the photographer, or the narrowness of riverbeds will give you an essential frame of reference.

Chapter 4 is a veritable “Photography 101” crash course, from photo equipment to software to costs to how to dress for a day in the sticks. While brief, this chapter is not at all generic and Leek is to be commended for sharing his knowledge freely.

Chapters 5–7 are photo galleries, divided by area. So as to not rob the photos of their visual impact, these pages contain no text. All photo captions are instead located at the back of the book. Listed by page number they disclose location, aircraft, the scene in general, lens, exposure, f-stops, speed, photographer. Nothing useful that does the photos justice can be said here—you have to see them! One thing they cannot do very well is give a sense of scale. Just realize that the small speck you see in the sky is really the size of a city bus! (Actually, there is one photo of a Puma buzzing a bus.) And, it might not have made much of a photogenic shot but a photo of low flying at night would have been interesting. 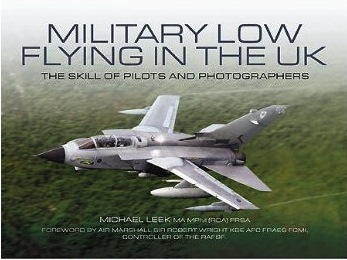 In some markets you might find this book with a different cover. Leek and his friends have more photos; let’s hope there’ll be more books! Bigger books! And imagine they had moving pictures! And sound!

How 30 Great Ads Were Made: From Idea to Campaign »
« Architecture of Transportation