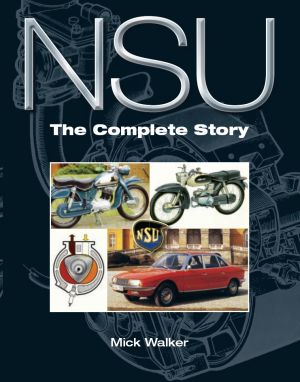 From knitting machines in 1873 (that’s where the “S” in NSU comes from)—by way of bicycles, motorcycles, and cheap but well-built small cars—to the futuristic, luxurious, world-class Wankel-engined Ro 80 passenger car in 1967 (that year’s European “Car of the Year” and also unofficial Car of the Decade) NSU was one of Germany’s pioneering manufacturers. More importantly they had an unusually solid track record for technical innovation both in terms of product and manufacturing processes. Still, having been absorbed in 1969 by Audi which itself is part of the Volkswagen Group, the nameplate was discontinued in 1985 and nowadays the sole physical reminder of its corporate existence is “NSU Road,” the address of its former factory that Audi still uses today.

This book represents the first-ever English history of the company. Walker’s interest in the subject comes from his background in motorcycles (as a racer, importer, race sponsor and later editor of Motorcycle Enthusiast magazine), and motorcycles were a if not the major aspect of NSU history. In fact, just over half the book is devoted to them; by the 1950s NSU was the world’s biggest motorcycle maker and none other than Soichiro Honda stopped by in 1954 on his fact-finding tour of Europe and expressed his admiration for the speed and reliability of NSU bikes.

Walker has over 110 books to his credit so it’s safe to say he likes writing them. He says, and the quality of this book bears it out, that this was a unique project for him and that he hopes you have as much fun reading it as he had writing it.

Describing the early, hectic growth of the company and its abrupt owner/management changes, Walker embeds the firm’s history into that of the world at large. Specifically the Great Depression, which forced the firm to abandon car production and forced it into accepting majority ownership by FIAT changed its fate in drastic ways. Who knows what would have happened if NSU had been allowed by FIAT to build more than the three VW Beetle prototypes they did for Porsche! This is a fairly small book but the basic story is told in a cohesive way and with enough detail to get a balanced picture. In addition to the many photos there are ads, technical illustrations, cutaway drawings, and model specs. All but a few of the motorcycle photos are period ones. Sidebars contain extraneous information about specific events and people. The “Wankel” chapter goes into good detail about Felix Wankel’s relationship with NSU, and background on the rotary engine includes a graphic representation of its operating cycle and a sidebar on Mazda’s use of the Wankel then and now. On the automotive front NSU’s greatest claim to fame came in the form of the 1964 Prinz Spyder, the world’s first rotary-engined car and then, in 1967, the Ro 80 (“Ro” for rotary, “80” for the number of its engineering drawing). The full story of this remarkable and misunderstood car is yet to be written but Walker’s chapter goes a long way towards giving the world an intelligent account of its virtues and vices. Mick Walker—just do it!

R-2800, P&W’s Dependable Masterpiece »
« Pegasus, The Heart of the Harrier