The B-25 in the Backyard 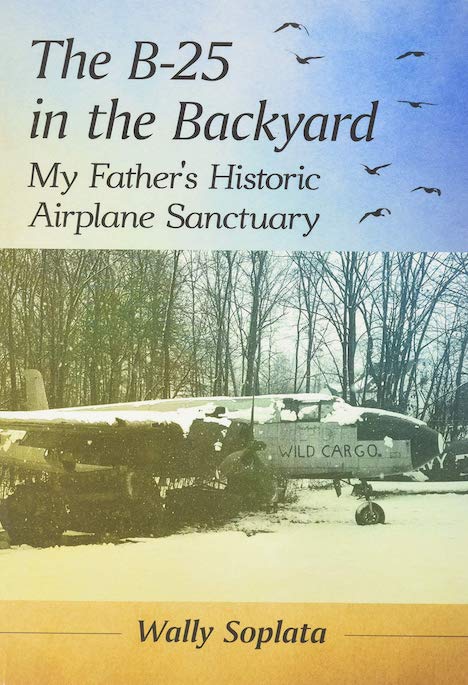 He collected airplanes. But not just any aircraft. He only had a very few hours flying himself that did include a solo in his youth in a Piper J-3 Cub. Then he’d never been aloft again in anything, not even a passenger plane, though he lived a long life (1923–2010).

His airplane collection consisted of non-flyable World War II planes that he hauled to the land around his home located on the outskirts of Cleveland, Ohio. The tow vehicles were as memorable as the aircraft; first one was an already rusted out ’52 Ford station wagon, followed by an early ‘50s something big yellow school bus and, next-to-last a 1957 six-cylinder Chevy Suburban, with the very last one another older Suburban that at least had V-8 power. All towed some variation of a trailer he’d built himself. 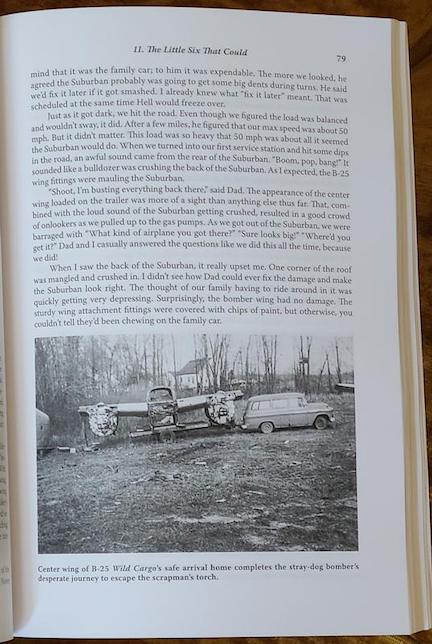 Above, the ’52 Ford station wagon pulling the homebuilt trailer home loaded with Wild Cargo’s center wing section. Wild Cargo is the B-25 shown on the book’s cover. Below, bringing the fuselage of the F7U Cutlass home was the last long haul for the school bus. Motor, transmission and all was fine but, as you can see, the bus’s body isn’t going to be able to cover or protect much anymore as it had been cut in order to stuff the fuselage inside.

On the property where the planes were parked he used a boom tractor he’d built from a ’36 Chevy car combined with an old Studebaker truck that, when completed, had three transmissions, two for motive or pulling power and the third became the power takeoff for the winch which he’d also homemade by combining an axle from a big-rig truck on which the steel rim of another big truck’s wheel was used as the spool for the cable.

At one time he’d hoped to fly more than just those few hours in the Cub but a severe stutter had rendered him 4F so military training and service was out of the question and he’d never had much money. His skill was indeed with his hands for he worked a full career as a carpenter, married a wonderful lady, sired five kids of whom only one was a boy. And it’s this child, now a man and himself retired from his own flying career, who tells his father’s story, that’s in no small part also his own. 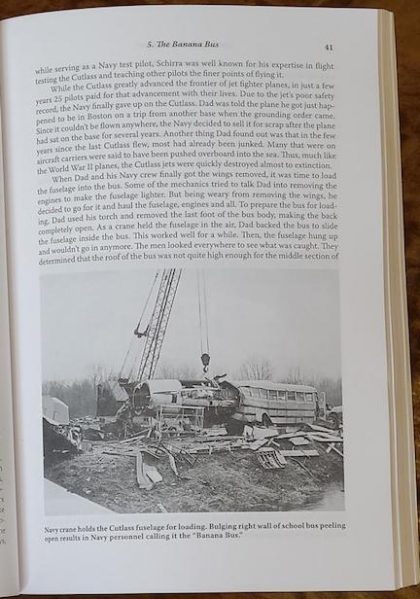 Dad truly was quite a guy in so many ways. Oh yes, he absolutely qualified as a “character” but one worth knowing as this book The B-25 in the Backyard, My Father’s Historic Airplane Sanctuary tells so well. Consider a few passages culled from the book:

“Dad had such rare and unusual planes. Dad’s Corsairs were Goodyear models instead of Chance Voughts. The F2G racing Corsair was unique in itself. The F-82 Twin Mustang and F7U Cutlass were never built in large numbers and both were now extinct. Likewise the Bobcat (the same model as flown by Sky King [Kirby Grant] and his niece Penny [Gloria Winters] in the television series “Sky King”) was rare, as its wood wing doomed . . . any hope of longevity.” 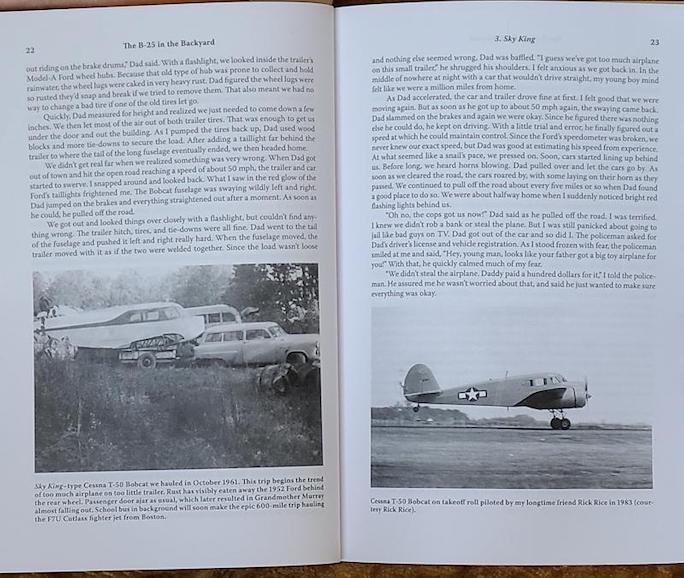 The aircraft on both pages a “Sky King” Bobcat, a Cessna T-50. The flyable one belongs to a Soplata friend with Soplata’s own on facing page still on the trailer behind the ’52 Ford station wagon. And note the bus still intact in the background. It will soon roll to bring back the Cutlass fuselage and arrive home in very different condition seen here.

“[Dad] forever [all of their 62 years of married life] had a saintly adoration for [mom] as the most wonderful woman to ever walk the earth. . . . That such a spiritual and personal bond to his wife was embedded deep in his soul is an enormous truth I learned early as their son and never to this day have doubted for a moment.” She lived an additional seven years following Walter’s passing during which time she “left his collection mostly untouched . . . just as he left it.”

Eventually various aircraft—or those parts of each that existed—did find other homes. Their dispensation and whereabouts today is revealing of what Walter had saved and that he and Wally had hauled home. As an example his North American B-25J (shown on the book’s cover) known as “Wild Cargo” resides with The Military Air Museum in Virginia Beach, Virginia and today is flyable! A Lockheed P-80 Shooting Star jet flown by the Navy has been restored and resides in the National Naval Aviation Museum in Pensacola, Florida. Another example is the really rare XP-82 Twin Mustang which is now flying and made her debut in the skies over EAA’s (Experimental Aircraft Association) 2019 Sun ‘n Fun and AirVenture.

Walter Soplata with his “support crew”—son Wally augmented sometimes with Wally’s four sisters and wife Peggy—accomplished amazing disassembly, hauling, unloading and reassembly with never an accident or mishap. When you read the detailed descriptions of assessing where the disassembly points are with something like a Boeing Stratofortress or Stratofreighter (185 foot wing span and 159.4 feet long /141.3 foot wingspan and 110 feet long respectively) to make it possible to transport to Cleveland on a homebuilt trailer pulled by an older Suburban, it is, quite simply, a task few others would even consider much less actually accomplish. 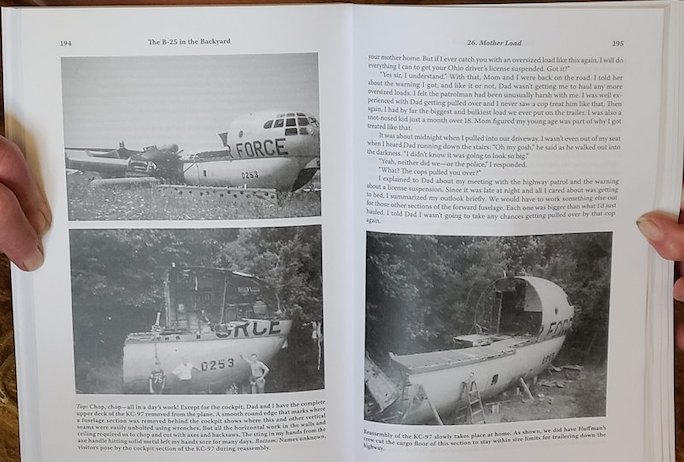 The KC-97 Stratofreighter being disassembled for transport back to Cleveland on top left page. Below and on facing page, the big bird is now slowly being reassembled at the Soplato homeplace.

Consider this abbreviated version of disassembling either of the Stratos; remove upper deck and cut into strips nose to tail, remove fuselage section behind cockpit revealing other vertical seams that are unbolted. Horizontal cuts required using axes and hacksaws. And that’s just the fuselage. There are still the wings to be dealt with.

The entire book is well written and will leave you marveling and in awe of what this father and son, along with the rest of the family, accomplished on their shoe string budget. It’s a grand story; best yet, it’s all true! Man’s ingenuity at its best demonstrated.

The B-25 in the Backyard

Quest for Speed: The Epic Saga of Record-Breaking on Land »
« Dornier Do 335 Pfeil/Arrow