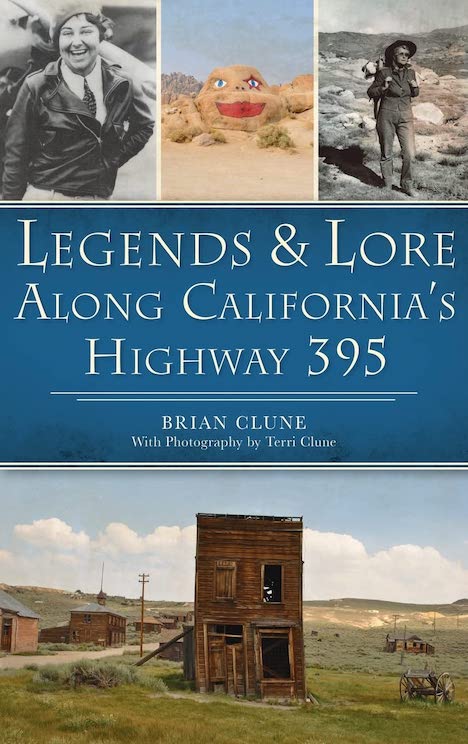 Should life present you with the opportunity, be it for business or pleasure, to drive either direction between Los Angeles and Reno, Nevada, let everyone else opt for the Interstates. I-5 and 80 are more miles for they are two legs of the triangle and truly no quicker—in fact, oft times slower due to traffic volume—than traveling the hypotenuse of that triangle, the by far more interesting and pleasurable US Highway 395.

Highway 395 has its southernmost origin at a point out in Southern California’s Mojave desert along Interstate 15 approximately halfway between Barstow and San Bernardino and, in reality, it continues northward all the way to the Canadian border—after Reno coming to Pendleton, Oregon then into Pascoe, Washington where afterward it joins Interstate 90 into Spokane before continuing its northward way to the border at a little community called Laurier. There it crosses the border, becomes British Columbia Highway 395 but ends a scant dozen miles later when it joins, just outside of Cascade, BC, the Canadian Crowsnest Highway 3 which itself stretches 721 east-west miles from just west of Vancouver, BC to Medicine Hat, Alberta.

As with most—and certainly with this book—the part of the route familiar to the greatest number is the portion in the Golden State. It has been populated by some much storied folk and is still the site of a number of places worth the time to explore and experience.

Likely Pancho Barnes was the most widely known. An aviatrix with a dynamic personality, she was the proprietress of the Happy Bottom Riding Club situated on the outskirts of Edwards Air Force Base. It was a dude ranch, restaurant, and bar that became a favorite hangout of folks on the base including the famous and accomplished Chuck Yeager. Pancho’s photo is on the book’s cover in the upper lefthand-most corner.

Another character was car loving Lemoyne Hazard. He relocated to the town of Bishop where he opened a garage and chose a huge bright red fish that he painted on both sides for his sign. Realizing there was virtually no signage giving travelers information or directions along 395, he erected other red fish-shaped signs throughout the area. Eventually his repair garage became a new car dealership first selling Dodges, then Buicks. Although Hazard is gone, his building stands just off Line Street in Bishop where it can be visited. 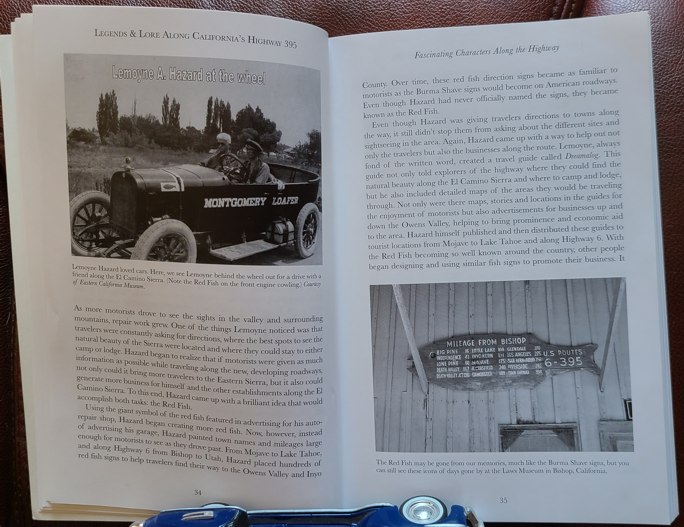 On the left is Lemoyne Hazard giving a companion a ride in what appears to be a Dodge albeit with its headlamps and fenders and back seat removed. Spot the red fish on the cowl? Image on the facing page is one of his information signs that today hangs in Bishop’s historical museum.

These are but two of the eight personalities the reader meets before the book turns to “Road Tripping Highway 395,” a travel guide not unlike ones that Hazard had produced back in his day which he called Dreamalogs.

Today’s 395-traveler can take this Legends & Lore Along California’s Highway 395 along to ensure no important sight will be missed such as Nightmare Rock, seen on the book’s cover in full color and on an interior page, below, in black and white. Many movies have been shot on location in this area too. It’s called the Alabama Hills and the image on right, below, is a period RKO camera wagon. You can see it and other movie-making artifacts in the Museum of Western Film History located in Lone Pine. 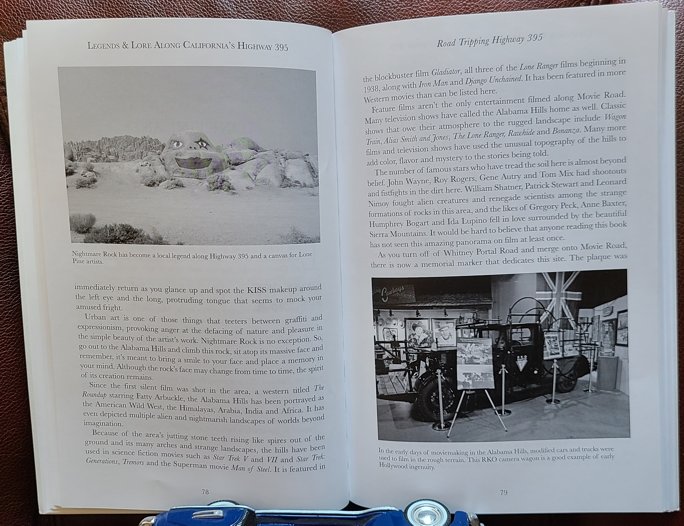 There are well over a dozen sites to visit along 395. Two are of particular historic significance. One is Manzanar, the World War II relocation camp that today is a National Historic Site administered by the National Park Service with many buildings and other facilities preserved.

The other is one of the better known and beautifully preserved true ghost towns. Bodie never was a movie set. It was a real Gold Rush-era town that grew to become second only in size to San Francisco. It survived, albeit growing ever smaller, until finally in the early 1930s but even then still watched over by caretakers until in 1962 the state of California designated it an historic State Park. That said, if contemplating visiting Bodie, a warning. Another book in my library lends a perspective on what its original residents endured. Ghost Towns of the West published in 1971 by the Lane Book & Magazine Company, warns: “Don’t try to visit Bodie in the winter: the temperature drops to twenty or thirty below, with ten to twenty feet of snow. The venerable town is delightful, however, in the spring and summer—as long as you remember to bring your lunch and don’t mind thirteen miles of washboard road going in.” 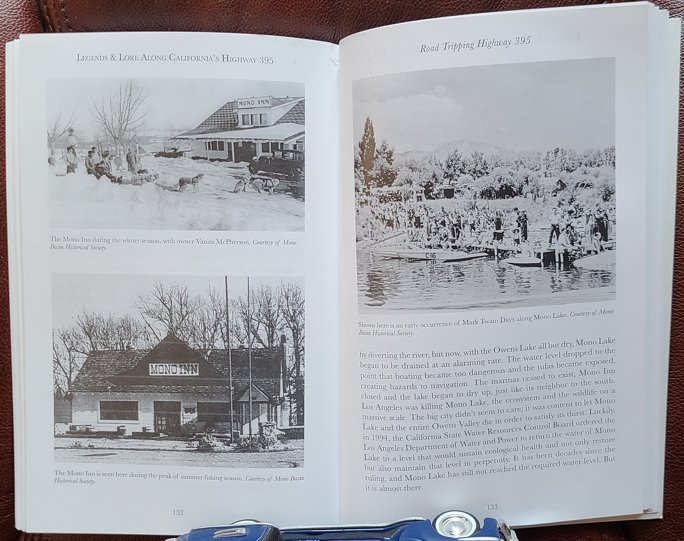 Built on the shores of Mono Lake in 1921 as this image shows, it was originally used as a bunkhouse and was always on fishing enthusiasts’ radar who populated it each year when the season opened. Today its long history as one of the best gathering places for miles around is upheld housing a bar and dining room offering luscious well-prepared meals. Mono Lake’s unique ecology is notable too. Essentially an inland sea, it’s populated with brine shrimp that attract birds by the thousands. Visually stunning tufa towers rise up out of the water.

The above is but the tip of that proverbial iceberg of all there is to see and do along 395. This little book does a fine, and most affordable, job of putting its reader in a position to enjoy every mile to the utmost. And its bibliography is an aide to anyone wishing to learn more about any particular place or individual.

Posted Under: Automobiles, Travel | Author: Helen Hutchings | No comments yet