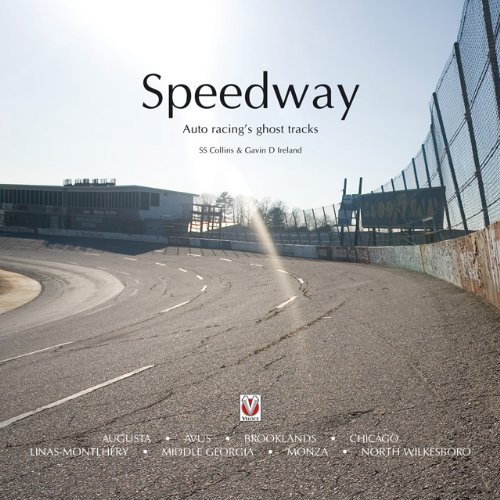 Want to see a grown man cry? Watch him look at the photos in this book! Well, a whole bunch of qualifiers are needed to make this sentence stick, but, really, this book pushes buttons. Certainly for those who’ve been to these once fabled tracks in their glory days and that are now in ruins.

Eight of them in the US and in Europe are covered here: Augusta. Avus. Brooklands, Chicago. Linas-Montlhéry. Middle Georgia. Monza. North Wilkesboro. It is not that inconceivable but rather unlikely that one single person would actually have witnessed live racing at all eight!

There are a number of books that cover ghost tracks and even for these authors (Collins = writer, Ireland = photographer) this is the second. Their first book, Autodrome—The Lost Race Circuits of Europe (ISBN-13: 978-1904788317) in 2005, covered nine tracks and a sequel covering another 10 is scheduled to be released in 2012. It is not readily apparent how this Speedway book fits into the picture. The authors expressly do not consider them related since the new book includes North American NASCAR tracks. But it also describes some of the tracks already covered in Autodrome (Avus, Brooklands, Monza, and Montlhéry—although with different photos) which is odd considering how many other ghost tracks could have been presented instead.

But, comparisons and speculation aside, this is a fine book in and of itself. The photos, suitably moody, take pride of place and juxtapose period and current-day imagery—weeds, cracked concrete, peeling paint, crumbling structures. See above; grown men may cry. . . . Also shown is memorabilia such as race programs and event posters. For each circuit, track diagrams are shown, sometimes several. (GPS coordinates would have been a nice touch, too, since you could still visit these ruins—if you can find them!)

The text provides sufficient commentary to highlight what happened at these circuits and what made them special. Collins, a Londoner who grew up near Crystal Palace Race Circuit (opened 1927, closed 1974. Jochen Rindt was the first to break a 100 mph lap average here in 1970) caught the racing bug as a young man, obtaining an internship with the Williams F1 team at the tender age of 16 and embarking on a degree program in Automotive and Motorsport engineering which he abandoned in favor of writing instead a book about on How to Get started in Motorsport (same publisher). And while he does race at the amateur level still today, he earned his keep as an editor at the UK motorsport technology journal Racecar Engineering and at Motorsport News. What all this means is that he has an interest in racing and its physical infrastructure as well as the historic underpinnings.

Unless you have a heart of stone this book will surely stir the soul!