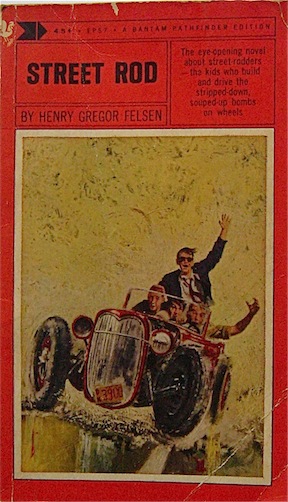 My copy is a November 1962 paperback Bantam edition, and the book, first published in 1953, was already in its 22nd printing—hardback and paperback. The last reissue seems to be 1990, and I am sure there will be many more editions of this perennial Young Adult novel. Young adult fiction, yes, but anyone of any age looking for a quick, nostalgic hot rod read should consider Felsen’s Street Rod. His prose is clear, often exciting, and Felsen never talks down to his young readers. Street Rod could be considered “coming of age,” and, along with teen/parent conflicts, budding romance, teen angst and teen aspiration, there are the thrills of raw power and high speed.

Felsen knows cars. The book is dedicated “to my fellow members of the Iowa Timing Association” and his descriptions of custom modifications and engine tuning hold up. Also, he nails the small, rural town experience, and his characters are developed at least somewhat beyond one-dimensionality. The town policeman, Arnie, for example, comes off as likeable, levelheaded and endearing. Ricky Madison, Street Rod’s hero, is also someone you wouldn’t mind knowing, and his Mom and Dad are drawn reasonably realistically, although shades of Ozzie-and-Harriet and June-and-Ward linger. Their relationship with Ricky is one that many real-life teenagers might envy, and it is amusing to read how Mom and Dad learned good parenting: “Mrs. Madison . . . returned carrying a large book. She put on the table . . . and leafed through it. ‘This psychology book has certainly earned its keep in this house.’” 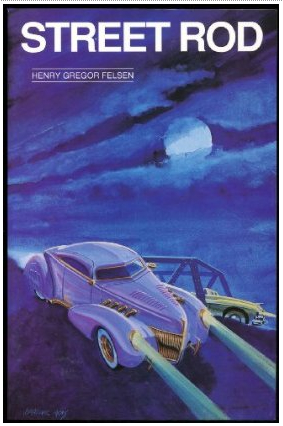 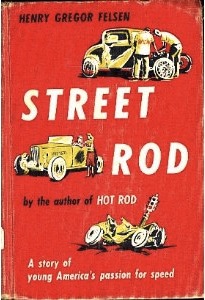 The plot? Nothing original here—boy builds car, wins trophy, loses car, but the story is nicely paced. The ending may come as a surprise, but there are no spoilers here. And, again, we have to keep in mind that this is Young Adult literature. Is it as good as Felsen’s iconic Hot Rod? No. Hot Rod was the first of his series of car novels, and it somehow has managed to have carried readers’ affection for decades; it holds a certain underlying power that Street Rod lacks. But Street Rod holds its own charm and excitement, and especially for those unfamiliar with Felsen’s work, I recommend it.