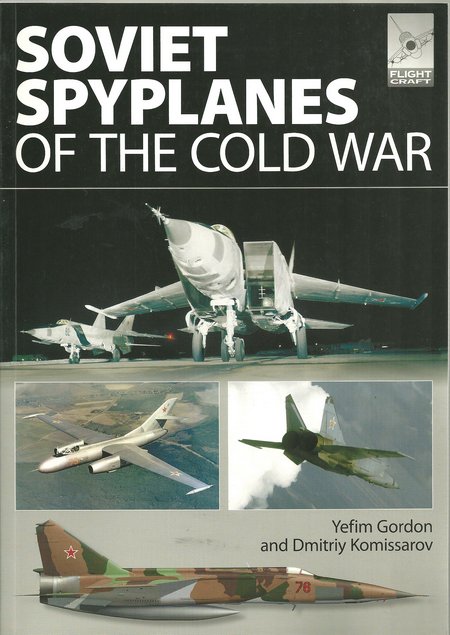 The title is clear enough but it is only the cover photos that provide the clue that only two aircraft are discussed: the high-altitude Mandrake (Yakovlev Yak-25RV), sort of a Russian U-2 and the high-speed Foxbat (MiG-25R), derivatives of which are still in service today.

This is the first book in a new series by this publisher that combines aircraft-specific history with kit modeling. If this is your sort of book you’d have expected something like this from a publisher such as MMP or even Osprey so it will be interesting to see how Pen & Sword will differentiate their offering. In this first book (a second one about Russian Gunship Helicopters by the same authors is in the works, ISBN 9781781592823) it is very much the in-depth treatment of scale model kits that treads new ground. This book goes so far as to show actual parts of the kits, box top art, and excerpts from the instruction sheets along with the expected photos, including detail shots, of finished models.

If kits aren’t your priority you’d still find plenty of interest, especially regarding the Mandrake of which so little is known. It was the first Russian high-altitude recon aircraft of its kind and built in very small numbers. “Next to nothing” is known of its brief career because much is still classified. It is for that reason that this book devotes only 10 pages to its history but 50 to the much more numerous Foxbat. The opposite is true when it comes to models: 14 pages for the former (only four kits are known to exist) and only 6 for the latter (all sorts of kits exist of all sorts of MiG-25’s but not one of the ELINT version so you’ll have to customize commercially available kits). The majority of the side- and three-views are devoted to versions of the MiG-25R.

If Soviet-era flying apparatus is on your radar you will of course recognize the authors from their voluminous output in books and magazines, especially their formidable, voluminous books for Crecy/Hikoki in which this little paperback would amount to barely a chapter but is pretty comparable in terms of scope and presentation except that the larger number of detail photos, technical drawings, and remarks about paint schemes again specifically cater to modeling interests.

Recaro – Seating in Motion »
« Forghieri on Ferrari: 1947 to the Present