Essays on Rods, Custom Cars and Their Drivers from the 1950s to Today 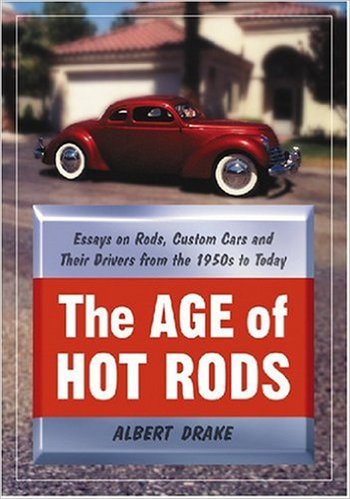 “I was like a man possessed: I could look at rods all day and still not be sated. How I kept from exploding, from experiencing spontaneous combustion, like a character in a Gothic novel, is beyond me. I was 30 years younger then, with immense energy, at least when it came to hot rods, and I was determined to see them all and to talk to everyone who would talk to me.”

You could easily start an Al Drake wing in your bookcase and populate it with two dozen of his books, some of which are compilations of the 300+ columns and articles he has written over the decades for pretty much any rodding magazine you could name. In other words, he’s been around.

Some of those books are published by houses with such entertaining and apropos names as California Bill’s Automotive Handbooks or Flat Out Press. That the latter is in Drake’s hometown of Portland, Oregon is no coincidence: his name is over the door. And his name is also on a rather different door—he is Professor Emeritus of English at Michigan State University, quite the surprise for someone who says he “learned more from the display ads in car magazines that [I did] from school books.” If you recognize the name from the science fiction world: same guy, he directed the Clarion Science Fiction and Fantasy Writing Workshop for several years but that’s a whole different story.

This 2008 book seems to have been prompted by Drake’s realization that the current prominence of hots rods means a whole new generation ought to be indoctrinated into rodding lore. And Drake was there, at Zero Hour, attending the first rod show here and the first drag race there, running on the salt, building his first rod. Even American readers may be surprised just how many rodding activities popped up in the Beaver State in the early 1950s.

The book is a compilation of some 80 previously published columns, divided into five chapters that presumably are intended to organize the contents by some thematic principle. If so, it defies our attempts to discern it. The book appears to also not be in chronological order, which probably won’t have any practical consequences for the reader who just wants to dip in and read a page here and there. In fact, reading too many at once may get a bit shrill. Jargon, cultural and rod-specific abounds, and newbies may start grabbing random 50-year-olds to get a translation. That the individual entries are not dated does pose obstacles when it comes to deciphering internal logic. What, for instance, is the point, of mentioning (p. 192) “July 19” as the date of a car gathering without stating the year? Or, in this case, if you didn’t pick up on contextual clues such as “solar power” and “Sunraycers” you won’t even know what century Drake is taking you to!

The book looks at cars, people, events and pretty much anything, anywhere with even a loose connection to hot rodding (a bunch of enthusiasts in France who as Les Amis de Route 66 count among their rides a hopped-up 2CV—and hail Drake as the “Walt Disney of hot rodding”) or just the general theme of “doing something different” (the Safercycle, vintage Bugattis) or car culture (the fiction writing of Gregory Felsen).

In other words, something for everyone. Of Drake’s various compilation books this one is, measured by formal parameters such as organization or point of view, probably not the most brilliant but it’s plenty nice and colorful and, this being really the key attribute, authentic.

Essays on Rods, Custom Cars and Their Drivers from the 1950s to Today

WO Bentley Rotary Aero Engines »
« The Legacy of Justice, An American Family Story