The Royal Air Force at Home: The History of RAF Air Displays from 1920 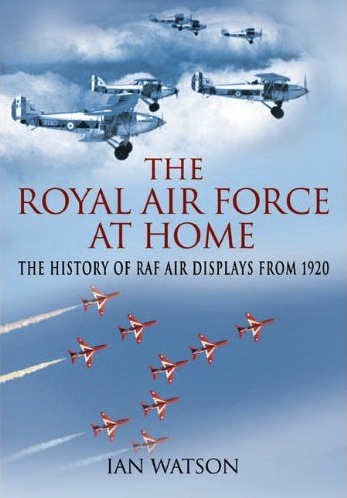 “Whatever the future does hold it could well be that we’ve seen the best of Britain’s armed forces in terms of ceremony and spectacle.”

In democracies the military is usually financed by the public in the form of taxation. Few people like to pay taxes, especially if the money goes towards something abstract or, in the case of military spending, something morally dubious. To make the pill a little sweeter for Joe Public, the military puts on its public relations hat and attempts to explain, if not itself, than at least its gear and operations. From mock battles to parades and open houses to fly-bys, even bands and drill teams, a rousing display of colorful pageantry seeks to foster unity of purpose (not to mention motivate potential recruits). But—there’s more to it. Events that have a ceremonial or commemorative dimension also remind the public that the freedoms it enjoys come at a price, that of a service member’s individual sacrifice.

Royal Air Force displays, the author says, are the second-biggest spectator sport in Britain. Be that as it may, it’s easy enough to see the appeal: state of the art technology, aerial derring-do, thunderous noise, and acrid smoke do stir the mind and possibly the heart, and, for those who saw active duty, the memories.

The author is a 17-year RAF veteran (radar operator) who used to shoot photos and film at air shows for his own collection and recalls seeing his first air show perched on his dad’s shoulders. While this book does cover the actual aircraft it is, however, not—or not primarily—a pictorial of air shows but a more cerebral look at origins, internal policies, and political and financial aspects.

As one would obviously deduce from the title, the book is about a British service but international readers may well need to be reminded that the book’s perspectives and approaches are also distinctly British, be it in terms of, especially, World War Two or the notion of pomp and circumstance in general.

In the Introduction, which includes a nifty description of the construction and physical operation of the Wright Flyer, Smith Watson makes the clever point that in the early days, a successful display flight was one in which the pilot and/or passengers didn’t fall out of the plane and the plane at the end returned to terra firma in a controlled manner—never mind acrobatics. Only five years after the Wright Flyer’s first flight, flying displays begun to be staged in Great Britain and in 1920 RAF Hendon inaugurated the Air Pageant which would become a veritable institution. (Recall the earlier comment about this being a British book: nothing is said about the role, history, or even location of Hendon—it is simply assumed to be “common knowledge.” As early as 1862, balloons were based here and later airships, and the Hendon Aerodrome in north London, remained an important aviation center 1908–68.) The author makes the interesting observation that the fledgling RAF may well have been scrapped had it not been for the air shows generating public interest and goodwill.

This first part of the book deals with the thinking behind display flying, specific air shows, a particular focus on both the actual Battle of Britain and subsequent commemorative events, and general history. Noteworthy in the context of the changing nature of air shows is the author’s inclusion of the discussion whether or not to invite NATO forces to participate. Readers who are itching for aircraft type-specific material will now have some 80 pages in front of them that present brief service and display histories of “select” (read the more prominent or popular) postwar aircraft. They are listed in what appears to be chronological order. As there is no Index there is absolutely no way of knowing what all is included, let alone find it the next time around, except for random hunting and pecking. Annoying, and so avoidable. There is a lot of BoB-specific material here, such as station by station listings of displays 1953–96.

Almost half the book is devoted to 10 Appendices. They are massively detailed—with all the good that implies even if it is safe to assume that the general-interest reader will struggle with the minutia. Aircraft historians will appreciate the listings of type, tail number, and home base of every air show craft. Other lists show what aircraft flew at what show for how long, or tour formations and display teams, and yearly calendars of events  from 1965 on—repeat foregoing and multiply by five for BoB events, including even a table of accidents of aircraft while on display duty. A short Bibliography enumerates sources consulted. Photos are not exactly plentiful and mostly b/w; two 16-page sections contain color photos.

The Royal Air Force at Home:

The History of RAF Air Displays from 1920