Galveston’s The Elissa, The Tall Ship of Texas 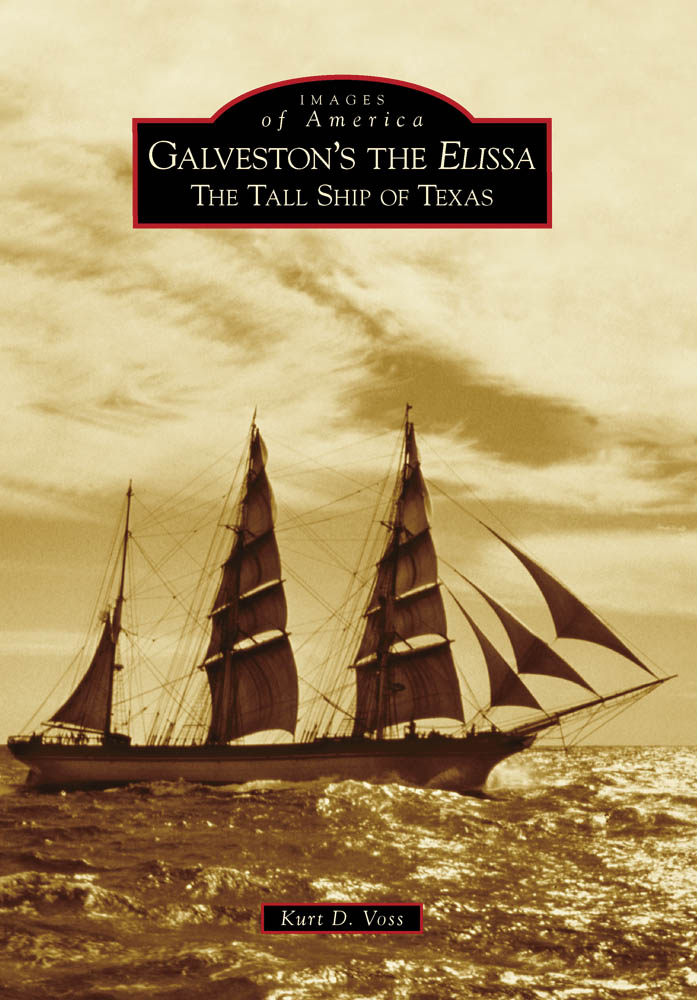 In 1883, then again three years later, the sailing vessel Elissa visited the port of Galveston, Texas. She carried bananas from Tampico, Mexico on that first trip. When her cargo was sold on the dock, Elissa was loaded with bales of cotton bound for Liverpool, England. The destinations after her 12-day Galveston stopover in September, 1886 were nearer as she headed for Pensacola, Florida and other Gulf ports. These two seemingly unimportant visits to Galveston’s busy seaport set into motion events that would, almost 90 years later, save this sailing vessel from destruction.

Elissa was built as a three-masted, barque-rigged, steel-hulled vessel in 1877 by Aberdeen, Scotland’s noted shipbuilder Alexander Hall and Company. She measured 205 feet in total length and 141 feet at the waterline. Her first owner, Henry Fowler Watt, had gone to sea as an apprentice at age 14 or 15, gaining his master’s license at 28. He owned and operated five different sailing ships at various times during his lifetime.

Unfortunately, at the time Elissa was built, the beauty and graceful elegance of sail was rapidly being replaced by the speed and convenience of steam power. Still, the Elissa traveled the world’s oceans, carrying the kinds of smaller cargoes that Watt could find for her. During an 1897 North Atlantic storm Elissa was heavily damaged and Watt was forced to sell her to pay her repair bills.

She was renamed the Fjeld (“mountain” in English) by her Norwegian purchasers who continued to sail her on the same type of voyages as she had under Watt. She made two more trips around the globe between 1897 and 1912, carrying whatever cargos could be secured between ports. Then in 1912 she was sold to a Swedish shipping company and renamed the Gustaf. Her rigging was reduced to simplify her handling, and in 1918 her first engine was installed. Passing through a succession of Swedish and Finnish owners over the next 40 years she continued to be modified and adapted, eventually becoming a motor vessel and losing her sails entirely. In 1959, she was sold to a Greek shipping firm and renamed the Christophoros.

By all rights, after being sold numerous times and eventually falling into the hands of Greek smugglers, what remained of the Elissa by 1970 should have destined her to be sold for scrap. By a stroke of luck however, she had been spotted by a marine archeologist who recognized the lines of a sailing vessel under the weathered, dilapidated visage of an old freighter.

Through a series of improbable events, largely based upon her two visits to Galveston more than 90 years earlier, the remains of the Elissa were purchased by the Galveston Historical Foundation, brought back to Galveston and restored. Today she is recognized as “one of the finest maritime preservation projects in the world.” The millions of dollars required for her restoration came primarily from private and corporate donations with a cadre of volunteers doing the majority of the restoration work.

Elissa’s story is told by Kurt Voss, the restoration project’s volunteer foreman from 1980 on and subsequently the director of the Texas Seaport Museum from 1994 to 2007, in this book, Galveston’s The Elissa: The Tall Ship of Texas. The 127 pages are a picture album, with a short introduction to each chapter followed by numerous period and modern-day black and white photographs. Each photo has a long caption explaining an important part of the Elissa’s story. While researching for his book, Voss found material from descendents of the people who owned and sailed on the Elissa. The foreword was written by Marjorie Lyle, granddaughter of the ship’s first owner Henry Fowler Watt.

Voss’s book is an important visual record of the Elissa, but also of that period in history when sail was being surpassed by steam. Of equal importance, he has recorded the dedication and passion of a community to preserve its history and culture. Looking at photographs of the vessel when it was found in Greece, it seems impossible that anyone would ever have the vision that she could be restored. Yet, Elissa is today a working, sailing testament to the commitment of the people of Galveston, and Voss’s book shows what is possible when a small group of determined and dedicated people work together to achieve what seems to be impossible.

Posted Under: History, Maritime | Author: Kevin Clemens | No comments yet

Porsche 908: The Long Distance Runner »
« We Were the Ramchargers: Inside Drag Racing’s Legendary Team