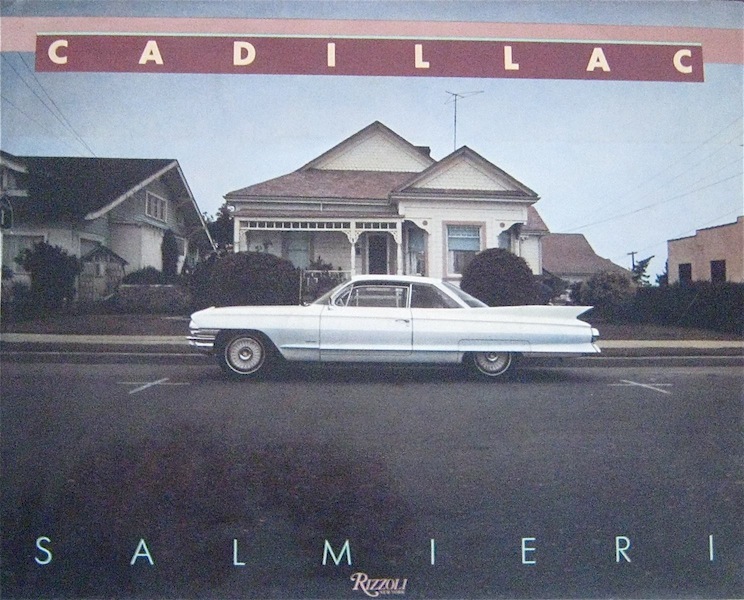 Perhaps the most interesting aspect of this oversize book (14 x 11”) is the fact that it had been born—after conception and gestation—at all. Towards the end of Owen Edwards’ long essay, he describes a remarkable circumstance: After nine years of dedicated work, traveling throughout America photographing Cadillacs and La Salles, Salmieri had stored his negatives in his Bleeker Street, New York City, loft apartment. In 1982, the building caught fire and burned for three days. Thanks to some quirk of fate, the loft—along with the negatives—were untouched.

Edwards’ essay, printed in a large font spaciously on white pages among the photographs, is a brief memoir, a capsule history of the marque, an homage to Harley Earl, a disposition on the American Dream and the—declining?—role of the automobile within this dream. It also tells the story of Salmieri’s quest, from fortuitously finding, in New York City, two 75 Series (the factory limousine) nose-to-nose, one receiving a jump start from the other, to the perfect shot, nine years later, of a 1961 white Coupe de Ville flawlessly centered in front of a small but elegant house on Route One in California.

In between are over 125 photographs, most one to a page, examples of “The Standard of the World”: Huge-finned 1959s shown against dramatic backdrops, cars rusting away in a Utah desert, sedans lurking in underground garages, various hearses, sundry drivers and restored examples, Cadillacs in small towns and in big cities, some whole, some wrecked. Salmieri is a gifted photographer. His eye is strong, his technique is professional, and his obvious love of the marque comes glinting through on every page. Salmieri’s wife, Sydnie, hand-tinted many of the photographs, and this but adds to the aesthetic flavor of the book. Her flair for dramatic skies and just the right shade of unrealistic color help to make it more than just another album of fine cars; her talent, along with her husband’s, take this book, at least nearly so, into the realm of fine arts photography. An elegant book—and it can be unequivocally recommended.

Note: This book was later published by another house; if possible, acquire the Rizzoli edition, it is superior in quality.