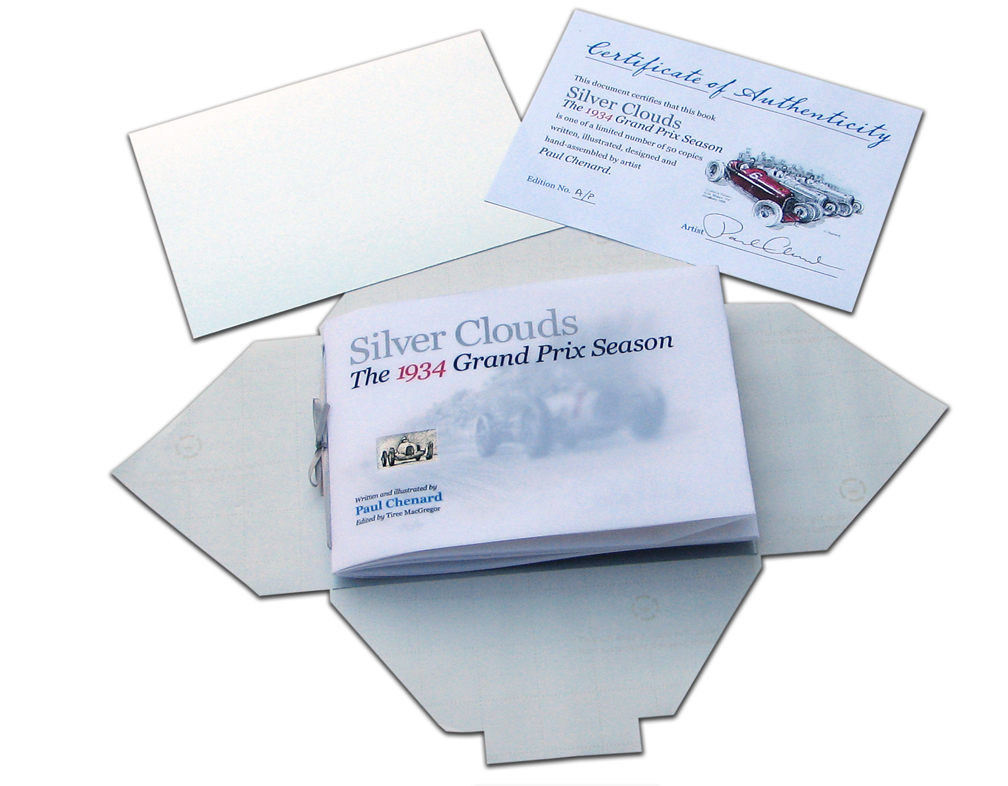 Note: on the functional level the item we describe here is a book but it is more appropriately thought of—especially in view of the rarity and hence price—as fine art that just happens to be organized in something resembling a book.

A graphic designer by profession, Canadian Paul Chenard has been attracting attention on both sides of the Atlantic for his distinctive motor racing art. Working with pen and ink and coloring pencils, often on colored paper, he is as confident with human subjects as with racing cars from any period: check out the way Francois Cevert’s piercing blue eyes stare out at you from Chenard’s blog header. His latest project is more ambitious: to write, illustrate, design, assemble, and package a beautiful set of limited-edition books celebrating an important year from each decade of motor racing.

Silver Clouds is the first in the series. Limited to just 50 copies, it records the events of 1934, the year in which Mercedes and Auto Union first exploited the new 750kg formula and Nazi Party money to produce the cars that would come to dominate motor sport’s remaining prewar years.

The book is both a work of art and a labor of love. To heighten the sense of occasion Chenard decided that the packaging should be ”like a negligée, a hint of what is to come, without giving it all away.” He is keen that the reader should not tear into it “like a kid at Christmas” and it really is quite an experience to unwrap the book.

Opening the outer envelope reveals a silver inner one, sealed with a sticker recording the edition number. Remove the seal (or simply nudge one of the side flaps open without disturbing the seal) and fold open the four corners of the inner envelope and the 7½ x 5¼˝ book is revealed. A transparent vellum outer cover protects archival-grade German watercolor art boards (signed and numbered) depicting racing scenes in Giclee. On the front cover a cut-out window exposes Caracciola’s Mercedes chasing Hans Stuck’s Auto Union. The book pages are folded sheets held together by a ribbon—in silver, of course. In all respects, the execution is well thought out and clever.

So much for the look and feel of the book. What about its contents?

The first half provides brief summaries of nine key races, each accompanied by a delightful illustration in pen and ink or pencil, with just one car highlighted in color. This section opens with the April 1934 Monaco Grand Prix in which Guy Moll’s Alfa Romeo P3 outpaced René Dreyfus’ Type 59 Bugatti. Next up is the following month’s Formula Libre race at the Avus, for which Chenard shows Moll again, high up on the banking. This prompts a segue: drawing the banking would have been the perfect opportunity to illustrate a feature that period photos are rarely able to capture well because photographers simply couldn’t get a good angle: the turns are gut-wrenchingly, gravity-defyingly steep. Seeing these heavy cars at such improbable angles would give the viewer a better appreciation for just how difficult a circuit this was. It is obvious from talking to Chenard and seeing his work elsewhere that he knows such details and that he simply chose to go a different way here. Also, unlike the hyper-realistic style evident in his other work, some of the elements he draws here have a certain “cartoony” quality: a car may be “leaning” forward, people may look blocky, a rolling car look less in motion than the flag being waved at it—these are conscious choices, not painterly flaws. 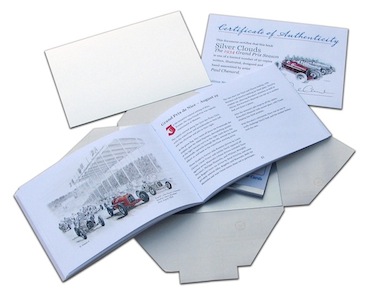 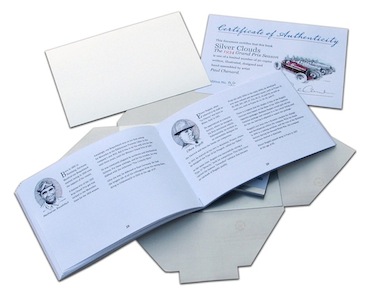 The other seven races are handled in like manner. The second half of the book contains 12 pen portraits, literally and metaphorically, of the men Chenard nominates as his personalities of the year: Manfred von Brauchitsch, Ettore Bugatti, Rudolf Carraciola, Louis Chiron; René Dreyfus, Luigi Fagioli, Enzo Ferrari, Guy Moll, Alfred Neubauer, Tazio Nuvolari, Hans Stuck, and Achille Varzi. The discerning reader may argue with the author’s choice of races or personalities, and may learn little new about them. But Chenard has an effective, economic style of writing that matches his art, and the Bibliography makes clear he is diligent in his research. He scoured back copies of The Automobile, Automobile Quarterly, Autosport, Car and Driver, and Road & Track to find articles by luminaries such as Beverly Rae Kimes, Karl Ludwigsen and Hans Tanner, and reminiscences from the likes of Neubauer, and Caracciola’s wife Alice. He also drew on books by, among others, Bill Boddy, Alan Henry, Richard Hough, and Count Lurani. Of his own library, Chenard says, “I’m very picky. I don’t have many books, but they’re quality.” We believe him.

Each copy comes with a Certificate of Authenticity confirming the edition number, and for those who wish to collect the entire series he is happy to reserve the same number on subsequent books. The package also contains an unadvertised special: a set of 2 x 3˝ collector cards of the aforementioned pen and ink portraits. And . . . if you’re lucky and Chenard has time, or if you ask him really nicely, the outer packaging just might contain a custom sketch for you alone!

Chenard is concerned that his growing band of followers thinks he is “stuck”’ in the prewar and immediate postwar period. He has therefore concluded that his next book will be about the 1986 season. Publishers among our readership should note that Chenard is considering a mass-market version of these books; contact him if you want to be involved.

If you put any value at all on your own time consider that it takes Chenard 1½ hours just to assemble the pieces. Then factor in the high-grade materials and you ask yourself how even at $200 CDN per book he makes any money. For now, he considers this first book one of his “bucket list” projects—the next one will cost $300. If this is simply too much money for having “a Chenard” in your hands, he also has a GP History Calendar at $25 and five different $30 CDN sets (with four illustrations each) of racing-themed greeting cards.

So, run, don’t walk, and snag one of the remaining copies!

The New Cunard Queens »
« The A-Z of 21st-Century Cars