A Memoir of Motor Racing and Other Automotive Escapades 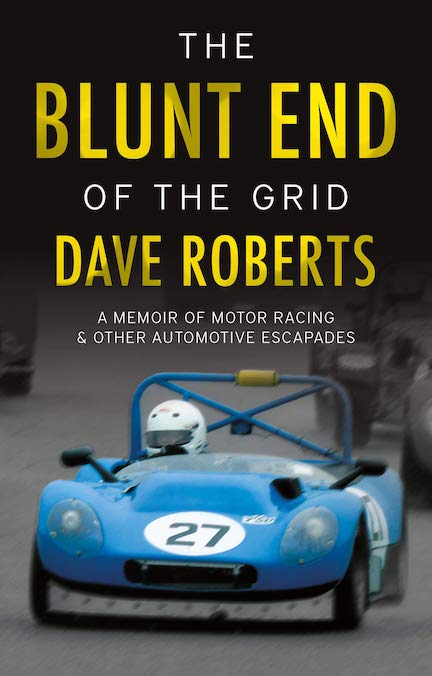 If I mention to friends or acquaintances that I’m interested in motorsport, I am guaranteed to get their opinion on what they call Formula 1 and I call Grand Prix racing. It’s understandable, because the sport has long since transcended its original, niche status to become a top-rating reality TV show with a cast of pantomime heroes and villains. Most people who are glued to Grands Prix, often held in such bastions of motorsport heritage as Azerbaijan and Russia, have no idea that people like Dave Roberts even exist. And that is their loss, because people like Dave are the bedrock of British motorsport. They aren’t rich, their racing isn’t a stepping stone to international glory, they don’t employ hot girls on PR duties, they rarely if ever win, and their cars are either slow or unreliable. Or both, as was so often the case in Dave Roberts’ racing career on the nursery slopes of motorsport.

This book does not resemble most motorsport autobiographies because it describes a career largely unpunctuated by success and it hasn’t enjoyed the services of a ghostwriter. Most racing drivers need the alchemy of a ghost to transform their leaden prose into readable copy and, in recent years, only Damon Hill (in his superb book Watching the Wheels) has shown that driving and writing don’t have to be mutually exclusive skills.  But I fell for Dave Roberts’ prose before I’d even finished page 3 because, if a writer has the chutzpah to make his first paragraphs a knowing parody of another work (The Damned United by David Peace), then I’m confident that I’m going to be in safe hands for the next 250 pages. And I was. 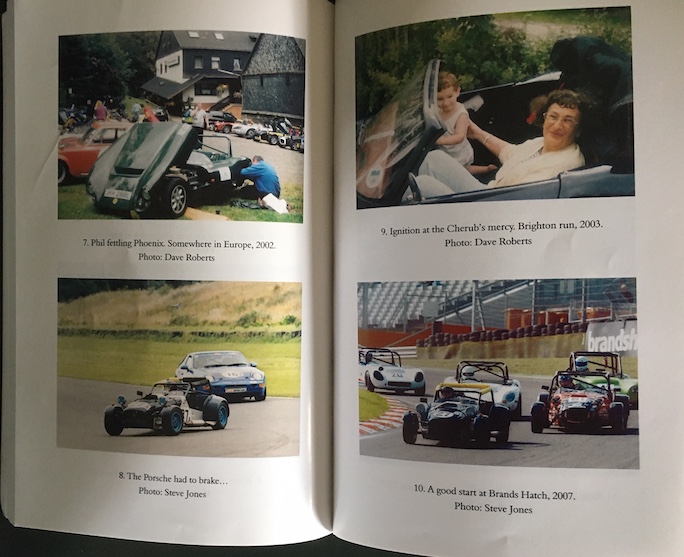 The author lives in Hull, in the north of England and, before his retirement, he worked as a driving instructor—perhaps the ideal career for a psychology graduate? He wasn’t able to scratch his motor racing itch until he was fifty, when he felt “like a bumbling overweight bee amid a swarm of angry hornets” in the on-track scraps of 750 Motor Club race meetings. Typically, these were held at circuits whose names will resonate only with those Brits who feel that motor racing doesn’t begin and end with the new breed of posh Formula 1 venues such as Abu Dhabi’s Yas Marina. Circuits such as Brands Hatch, Cadwell Park, Croft, Snetterton, and Thruxton may have a little dirt under their fingernails, more than a few wrinkles and worry lines, but they play a vital part in creating the vibrant culture of amateur motorsport in Britain, and have a heritage that far outstrips many parvenu F1 upstarts like Sochi and Baku.

Two things most characterize this book—the author’s elegant, relentlessly self-deprecatory style and the catalog of mechanical and electrical woes that besets his road and race cars. But Roberts will insist on buying near basket cases, both from auctions and friends. This is his verdict on the MGB, at the time when the model “occupied an almost unique netherworld squeezed between ‘incipient classic’ and ‘car that’s only recently gone out of production.’ The newer, rubber-bumpered ones were despised, the older ones were eyelash-fluttering Jezebels leading the unwary into a dank domain of endless subterranean decay. Sorry, rust.” That’s close to David E. Davis territory, no? 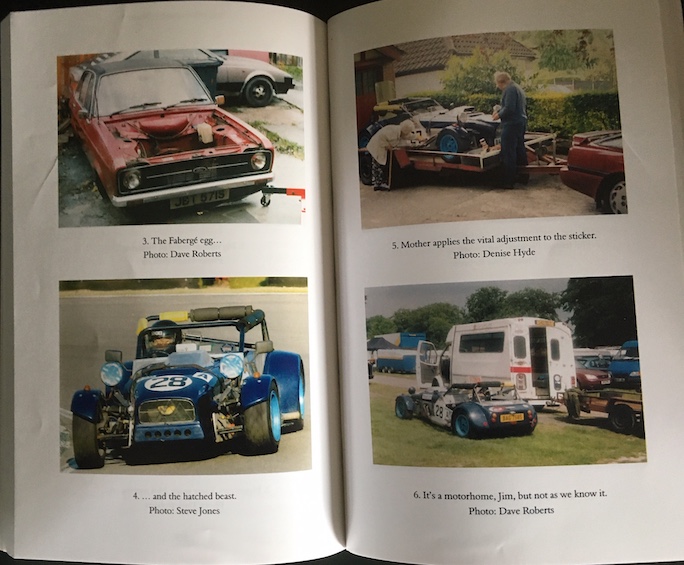 There is not the space in this review to list the many road-going vehicles whose maladies Roberts catalogs but the usual suspects are terminally ill Fords, Rovers and Peugeots, aka “my fleet of petrol- sapping degenerates.” The many and varied ailments and defects suffered by his race cars are a rich source of anecdote, although I doubt if the author was thinking about that as he emerged from underneath his car, oil-stained and bruised, after yet another part’s demise had resulted in the car’s failure to proceed. He raced a series of cars whose names are unlikely to be heard at Pebble Beach or Villa d’Este—marques like the  Sylva Phoenix and the Cyana MX 500, that are constructed using the age-old technique of recycling bits of old road cars into new, or at least new-ish race cars. At one point, the author graduated to racing an ageing Toyota MR2 and his description of the “make do and mend” enterprise which thrives in the lower strata of the British economy is wonderful. Having sold one of his MR2s on eBay to Keith, a paint sprayer by trade, the car is then airbrushed to look like a wooden whisky barrel to publicize the business: “Old MR 2s can be a surprising driver of the economy, the government should take notice.”

Even on his best days the author didn’t graduate from the middle of the grid but his usual starting position was on, or very near the back row. The fact that his humor and equanimity weren’t remotely troubled by his lack of pace is what helps to make this book such an enjoyable read. Who wouldn’t warm to the guy who, while on the starting grid at “posh Silverstone,”had to disconnect a wire to stop his car’s horn sounding, before “The lights went to green. The clutch came up. Oh. I had found reverse … Hurriedly, I braked and selected first. Off I went again. The field were quite a way ahead by this point.” True to its title, there is much description of the rare triumphs and frequent tribulations the author experiences on the track and, although it helps to be familiar with the club racing scene, the accounts of near-misses, spins, fires, electrical gremlins, and mechanical woes never fail to entertain. If you are as mechanically inept as your reviewer, you might occasionally struggle to grasp the precise detail of cause, effect, and cure of some of the maladies endured by Ecurie Roberts but that didn’t affect my enjoyment of this lovely book by one iota.

It’s not all about cars though, as this book is nearly as strong on relationships, loss, and comradeship as it is on its primary topic. In particular, the author writes eloquently and movingly about the terminal illness and subsequent death of his beloved Denise. An author needs good technique and broad shoulders to pull this off without himself falling victim to self-pity, cliché, or mawkishness but Dave Roberts meets this challenge with ease. And it was delightful to hear of how, in the year following Denise’s death, he first meets Janet, who later became his wife. Touchingly, he met her after deciding to restart his social life through the medium of salsa dancing, on a Thursday night.

I’m not sure I have ever read a motorsport-themed book even remotely like this one, because the ability to write such sparkling prose is rarely paired with mechanical aptitude. The appeal of this book isn’t even Roberts’ story per se but the way in which he tells it. Roberts is a master of self-deprecation and, if I had to compare him with another writer, it would be Jerome K. Jerome, of Three Men in a Boat fame. I think Jerome would smile as much as I did at Roberts’ account of a race at Brands Hatch, when things went uncharacteristically well: “A couple of times I was puzzled at how a slower car had somehow got past me. Then it dawned. I was LAPPING someone. Crikey.” Roberts is a widely read man, and well-chosen allusions and quotations from sources as diverse as Vonnegut, Shakespeare, and Greek mythology pepper the text. But unlike some writers (mea culpa) he always gives the source and an explanation.

I recommend this book very highly. Its insight into life in the lower echelons of motorsport shows how much its professional counterpart has lost touch with its heritage and values. But more than that, it’s the work of a sensitive and likeable man who is aware that even his modest career was a privilege unavailable to most. I will finish this review with Roberts’ reflection, prompted by the plight of Indian subsistence farmers, after a flooding catastrophe: “Hell on earth, while I watch from heaven on earth, leafy suburbia, one of the lucky small percentage, an accident of birth.” These are not sentiments you tend to encounter in the typical racing driver biography …

The Blunt End of the Grid: A Memoir of Motor Racing and Other Automotive Escapades