Charles M. Eyer, Survivor of 59 Combat Missions and a Year in Nazi Captivity 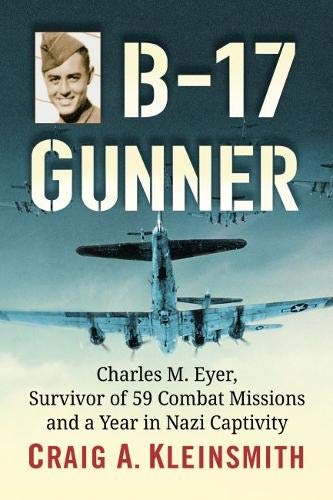 by Craig A. Kleinsmith

Imagine yourself in a space that is no bigger in any dimension that the length of a yardstick. You cannot stand or stretch but must be curled or crouched into that sphere for hours on end. Oh, and you are not alone in that space for on either side of you is a permanently mounted gun. Not small ones either but water-cooled .50 caliber machine guns that you aim and fire, one with your left hand, the other with your right. And, did I mention that you are doing this while so far above ground that you must be on oxygen and bundled in all manner of cold-weather gear to keep from freezing to death?

There’s more. You are crawling and curling into this space voluntarily and will continue to do so at least 50 times—each time a multiple-hour mission—for you have signed on and been trained as a B-17 gunner during World War II. Welcome aboard!

Author Craig Kleinsmith’s abilities as a writer shine in this book as he’s chosen words and placed scenes such that the reader is very much in the moment. And the vast majority of those moments are far from comfortable, soothing, or secure. For this commentator it was, in so many ways, a troubling and emotionally challenging yet compelling read.

Envision yourself stuffed in an area only those slight of build could manage, hung beneath the bottom-of-the-airplane in a turret looking through the plexiglas as the ground and everything else whizzes by. Once over target, flak and enemy fighters make runs trying to knock you and your airplane out of the sky. It’s your job to defend your ship.

As the calendar pages keep flipping, there remain fewer and fewer of those with any sort of link to World War Two servicemen and -women. That makes this book and others like it that much more important for subsequent generations to have available to read and thus, hopefully, to be able to understand even if only a little bit.

Your commentator’s visceral response while reading this book likely traces back to two people.

One, my own father, who did serve during that second World War aboard a US Navy “tin can” more formally called a destroyer. He was a master of all things mechanical so, immediately upon completion of basic training, placed in charge of the engine room on a newly-built and commissioned destroyer. After shake-down cruise from Boston’s shipyards to San Francisco, the ship was off to the South Pacific to join Admiral Mitscher’s soon-to-be much storied fleet. I rarely could get my father to talk about those tense, trying years. But once in awhile he could be drawn out . . . the rotating “duty” shared by all on board of being the ones to go on deck after an enemy attack, gingerly pick up those so far unexploded bombs, carry each ever so carefully to the ship’s edge, and toss it overboard.

The other direct connection is that of a much-treasured and now deceased friend named Dean Batchelor. Dean’s name will be recognized by some as the author of numerous automotive books on various subjects. Dean had also been editor of Car Life and Road & Track and written for many other publications and designed record setting salt flats and dry lake car bodies. He was nearly as reticent to talk about his world war experiences as my father but, again, once in a while he’d share a glimpse for he, like the subject of this book, Charles Eyer, had been a gunner on a B-17 although his build and size were such that he couldn’t have squeezed into that bottom turret. Dean was waist gunner and radio operator.

Both men were part of the same UK-based 8th USAAF but in different squadrons. And like the subject of this book, Dean’s plane had been forced down and, again like Charles Eyer, had spent a year incarcerated by the Nazis as a POW and, toward the end, been forced by their captors to make that arduous hundreds and hundreds of miles, 80-day march for the Germans were unwilling to surrender their captives as the Russian army approached. Both men were skin and bones by the time they were freed.

Kleinsmith got to know Eyer in 1973 while serving in the local Army National Guard as Eyer was the maintenance repair man at the armory. The two worked closely for a dozen years “resulting in a close and enduring friendship.” Over time Kleinsmith learned Charlie Eyer’s story. Then, coupled with his own research as is detailed in the appendices, chapter end notes, and bibliography, he was able to share Eyer’s experiences with the help and approval of Charlie Eyer’s son and daughter.

Once you start reading B-17 Gunner, you’ll not be able to put it down until you’ve reached the last page. The story will linger with you long after.

Charles M. Eyer, Survivor of 59 Combat Missions and a Year in Nazi Captivity

by Craig A. Kleinsmith

Posted Under: Aviation, Military | Author: Helen Hutchings | No comments yet