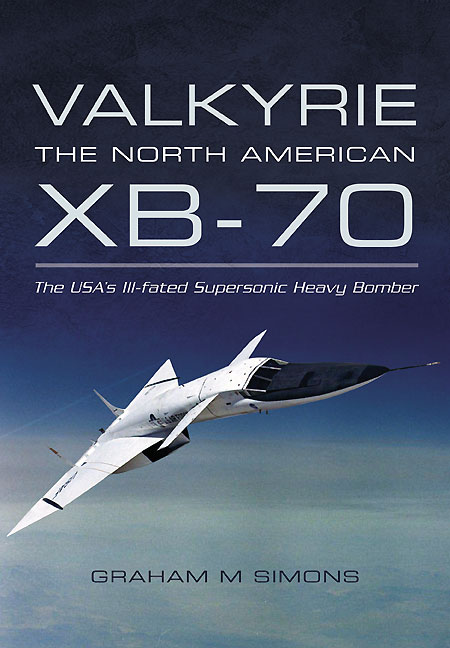 Seeing a Valkyrie is one of those “pinch me” moments. High off the ground, tall (30 ft), jarring angles, protrusions everywhere, engine nacelles big enough to swallow sports cars whole, and sooooo looong. The shortest Boeing 747 is 231 ft, a Valkyrie 196. Had there been a stretch version for civilian SST use it would have been 42 ft longer still. But it would have seated only 76 passengers. But it would have gone Mach 3. But. But. But.

The story of this short-lived (1964–69) supersonic, six-engined, nuclear-armed, deep-penetration strategic bomber is full of “buts.” Dividing its total program cost by the few flights flown, a per-flight cost of $13.1 million makes it difficult for people who look at this project out of context not to dismiss it as misguided from the start. Unlike the Blackbirds and the Concorde, its story is not commonly known outside of aviation circles. In its prime, such as it was, all of two prototypes existed. Today only one is left, on display at the National Museum of the United States Air Force at Wright-Patterson Air Force Base. It was the highest- and fastest-flying manned aircraft of its day, and just as it soared so will your spirits, simply by understanding the phenomenal technical advances this craft represents, the staggering effort behind it, and the far-reaching influences its role as NASA-operated research aircraft had on other projects.

There exist a handful of Valkyrie books; all are interesting, most are far more lavishly illustrated than this one (recommended: Valkyrie: North American’s Mach 3 Superbomber by Jenkins and Landis, 2008). Simons has widely published on military and civil aviation topics and his approach and knowledge—and connections—make his book almost certainly the most thorough and wide-ranging one yet in terms of background and technical details. To digress for a moment, it is ironic that this publisher, Pen & Sword and its various imprints, produces some of the most substantive books in this field but they are physically the smallest (6 x 9″) and almost never have color photos. At least they’re usually hardbound and printed well.

Onwards and upwards. Simons’ book is for the person who wants to really get a sense for the political landscape at the time of the project’s launch and the strategic and tactical parameters of the day. Other books touch on that, but not as nuanced. Pilots or would-be pilots will salivate over the detailed descriptions of flight behavior, flight maneuvers, and annotated illustrations of cockpit instrumentation straight from the manual. If this is not the sort of thing you want or expect, buy a different book!

Make paper cone – cut in half lengthwise – rotate so that curve of “belly” faces downward – hurl into air. As the cone flies in this orientation, its shape pushes it upwards because a conical body underneath the center of a wing pushes air to the side, thus increasing pressure under the wing section, thus increasing lift—without the need to have a big wing which would increase drag. You just demonstrated “Compression Lift,” the very complex aerodynamic principle that XB-70 engineers discovered in an old NACA (so old it wasn’t even called NASA yet!) research paper and without which the Valkyrie couldn’t have flown high and fast and, always a nice touch, without melting!

Construction and testing are covered in good detail. Other members of the proposed and actual supersonic club—Blackbird, Concorde, Sukhoi T-4, American SST—are referenced where relevant. Simons also covers in good detail the catastrophic mid-air accident of A/V-2 (dramatic photos!) but leaves little doubt that, at the core, political buffoonery as practiced by U.S. Defense Secretary Robert “Mac the Knife” McNamara did the Valkyrie in. That said, if it had gone operational its heat and radar signature would have become handicaps in the long run anyway, and its successor, the B-1B Lancer does much better.

Photos (nicely sharp) and tech illustrations (oddly fuzzy) are plentiful and some of them are new to the record, which makes it all the harder not to grumble about their small size. Appended are a Flight Test Log and a very welcome list of abbreviations. The Index is rather good but, always frustrating, does not list every single occurrence of any one thing. Also, it must be said: if you are the sort of reader who cares about punctuation and typesetting (wordspacing etc.), watch your blood pressure!

Bubble, bubble, toil and trouble (after Disney, not Shakespeare who says something similar but different)

There are two instances that will make cognoscenti a bit nervous, not because of the severity of the issue but the worry that Simons’ argument can’t be verified (where are Chapter Notes when you need them?!). [1] Regarding the SR-71 Blackbird and the old question of whether U.S. President Johnson called it “SR” (yes) or “RS” when he revealed its existence to the public in 1964, Simons puts forth (p. 197) that while Johnson read his speech as written—SR (and he does say that papers archived at the Lyndon B. Johnson presidential library show that it was the stenographer’s transcript that was later handed out to the press corps that transposed the letters to RS)—the Blackbird really was supposed to have been designated RS but that General LeMay simply didn’t like it and had Johnson’s speech changed to SR. [2] Readers familiar with the literature will know of Lockheed’s fabled Skunk Works R&D facility and why it bore that name. Simons (p. 200) puts forth a new theory: it had “striking” black/white carpeting in its foyer. Nah.