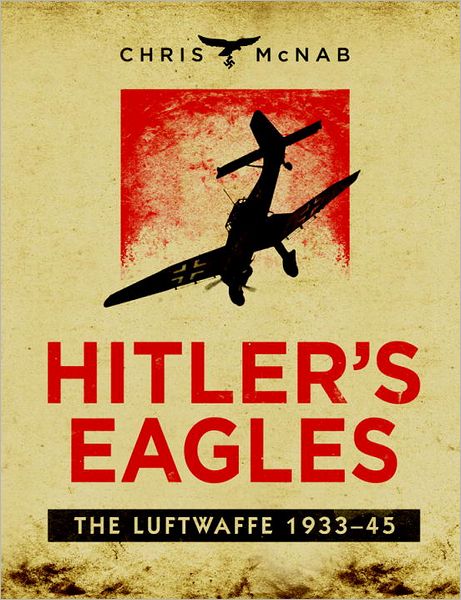 “The Luftwaffe was at the cutting edge of the strategic and tactical developments of the Armed Forces, and provided the world with the first true glimpse of the power of coordinated air and land forces. This book will seek to explain, therefore, not only its central role in Germany’s offensive then defensive plans, but also how the individual aviator, ground crew and soldier played his part in these plans, both in victory and defeat.”

A tall order but Chris McNab does just that. An experienced military author who has written almost 30 books on everything from Napoleon’s armies to the Vietnam War, you may even recognize his name as an Iraq war commentator in The Times. Considering how much has already been published on the subject of Nazi Germany’s air arm it seems ambitious for anyone to attempt another book without falling into the “same old/same old” trap. Even if there are few new cards in his deck, McNab shuffles them in a useful, competent, and truly engaging way.

More than anything, this book is commendable for casting a wide net, not just in regard to machinery but also such seemingly peripheral material like uniforms, flying clothing, and emergency equipment. McNab covers the Luftwaffe’s historical rise to power from the early 1930s despite the Treaty of Versailes’ limitations, describes its organization, and includes a biography of senior officers. The descriptions of the WWII fighters, bombers, ground attack aircraft, seaplanes and maritime reconnaissance anti- shipping aircraft are excellent, together with operational analyses of each aircraft type.

Much is written about Hermann Göring, the WWI fighter pilot who would come to head up the Luftwaffe from 1935 to 1945. Although in the early years his close relationship with Hitler was a very significant help in obtaining the necessary funding to produce aircraft and train crews, the later years saw Göring and Hitler make significant strategic policy errors that directly affected the outcome of WWII.

While Britain’s RAF relied on the RAF Regiment to defend and protect its airfields, the Luftwaffe included the Fallschirmtruppen, the paratroop battalions that were so successful during the May 1940 invasion of Holland. They were carried in the simple but effective tri-motor workhorse Ju 52 that was the Luftwaffe transport of choice all the way through WWII. The successful capture of the Belgian forts at Eban Emael in May 1940 was due to the Luftwaffe’s use—the first by any military arm—of troop carrying gliders, an excellent example of forward thinking. Air Defense was another Luftwaffe responsibility, covering the wide disposition of anti aircraft flak artillery that by 1944 grew to a remarkable personnel strength of 2.5 million.

Each of the main Luftwaffe geographical combat areas is covered in detail: Poland, United Kingdom, North Africa, Greece, Soviet Union, Central Europe, Atlantic and Mediterranean. The invasion of Poland in September 1939 saw the frightening application of modern air power against a relatively unsophisticated army and a virtually nonexistent air force equipped with bi-plane fighters. Eight months later saw the invasion of France and the Low Countries with the German Army using its Blitzkrieg tactic for the first time in which direct and sophisticated communication between the German Panzer armor and Luftwaffe ground support aircraft like the Ju 87 Stuka brought about the early demise of the French Army and the disorderly evacuation of the British Expeditionary Force.

Given McNab’s detailed attention to matters of strategy it is surprising that in the description of the highly successful raids on British cities in late 1940, no mention is made of the very effective German radio beam systems, X and Y Gerät, that enabled bomber crews not only to accurately navigate across the United Kingdom at night but gave them warning of the upcoming target. It is interesting to note that at this stage of the war Luftwaffe bomber losses were insignificant. (During the devastating November 14 Coventry raid, just one Dornier 17 was lost and that due to double engine failure not enemy action.) The increasing level of German advanced technology saw early success of two new prime movers, the jet engine and rocket motor that eventually produced three jet aircraft, the Me 262 and He 162 jet fighters, the Arado 234 twin jet light bomber and the Me 163 Komet rocket fighter. Sadly for the Luftwaffe, all these aircraft had game changing potential but went into service too late to change Germany’s fortune.

There are innumerable fascinating photographs and illustrations. That many are sourced from almost 50 of this publisher’s vast collection of excellent aviation titles (all referenced in the Further Reading section, along with a host of other titles) will only bother those who already have them. Many of those booklets make extensive use of specially commissioned highly detailed and technically accurate aircraft color profiles and 3-views as well as dramatic “action” drawings. Even if you’ve already seen them, there’s no arguing that they are entirely appropriate here and support and advance the narrative—and may draw a whole new audience that has yet to discover them to these really exceptional small books that Osprey produces by the hundreds.

Easy to overlook, a conversion chart for units of measure and a table of US/UK/German air force ranks are tucked away on the Colophon. The Index is quite satisfyingly deep. Even seemingly minor things like heads and subheads—which are so particularly important in a book of such scope—are intelligently and consistently applied. Paper, printing, photo reproduction, binding (a rounded spine even!), and the proofreading too (all the Umlauts are correct!) combine to elevate this book far above others—and at an absurdly low price!

Barbie™ i can be™ President »
« Canadian Art: The Thomson Collection at the Art Gallery of Ontario