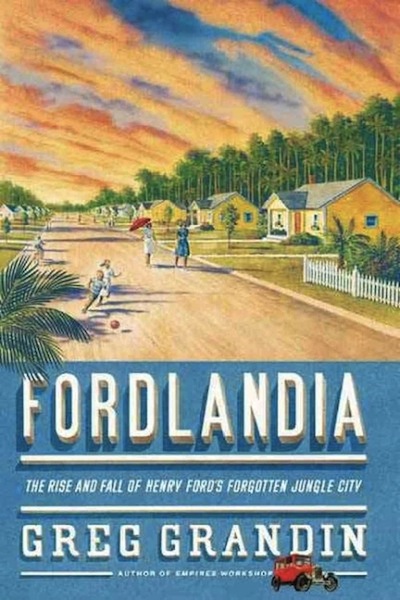 There are books about the T, the A, ’32s, Ford in competition, Henry and Edsel, Ford versus Ferrari—it truly is a very long list of books that parse out and relate various aspects of Ford. That makes the reality of this new book Fordlândia being a genuinely revealing and worthwhile read all the more remarkable.

For those unfamiliar with the name invoked in the title, Fordlândia was a real place. In a sense it still is a place, but today a near-ruin which the author visited, twice—something its creator Henry Ford never did, not even once. It is not the easiest place to get to as Fordlândia is an 18 hour boat ride inland on the Amazon River from the coastal town of Belém, itself not far from where the Amazon empties into the Atlantic Ocean. Fordlândia is located in one of this globe’s most lush and complex tropical rain forest ecosystems.

Greatly foreshortened, Henry Ford’s interest in this place so far from his Michigan base and home was rubber. Trees that produce latex are indigenous to this area of Brazil. What Henry didn’t know, nor did his advisors understand clearly enough to warn him, was the rubber trees native to Brazil had been virtually destroyed by blight and bugs that are also indigenous to the area. Tree seeds had been spirited out before the destruction and planted in the similar climate of Southeast Asia where they flourished. But they flourished because the natural enemies of the trees had been left behind. Henry looked around, decided he didn’t want to have his rubber source anywhere in Asia. Thus he set about “simply” re-establishing the rubber producing forests in Brazil—complete with a town similar to what he’d created around the Rouge so that the indigenous South American rubber workers and their families could be housed and taught to live just like their Ford Motor Company worker-brethren in Michigan.

Author Greg Grandin explains that, “Like Michigan’s Upper Peninsula, the (area where Fordlândia was located) is filled with mixed stands of broad-leaved trees about a hundred feet in height with robust, shade-providing crowns and straight trunks relatively free of branches. Yet unlike in Michigan, which counted on average about six different tree types per acre, (this area) contained about a hundred different species in that same space.” That meant the latex trees were spaced far apart. Thus, when Ford’s workers planted, as directed by Michigan, grids of rubber trees spaced mere feet apart, it created ideal dining and reproductive conditions for pests and parasites which multiplied just as rapidly as their food source. And history repeated itself. Fordlândia’s rubber trees were destroyed before even reaching productive maturity.

So, now you know the fate of Fordlândia. But it is the details behind it all that spawned this book. The author, a history professor at New York University and a Guggenheim fellow (fellowships are awarded to those who have already demonstrated exceptional capacity for productive scholarship), has written previous books that examined other aspects of American influence in areas of South America. Thus Greg Grandin brings to bear his communication skills and the educated, thoughtful perspective of a contemplative historian. This resulting book is equal parts automotive, social, industrial, and business history.

Chapter after chapter—23 in all, with some 55 black and white photos interspersed throughout—the reader is held, solidly engaged by the progression of the narrative. A reality, automotive enthusiasts are late-comers to awareness of this book which has already been well-received and reviewed in “mass-media” coast-to-coast, from the Los Angeles to New York Times and major markets in between. The automotive press has carried no reviews or even mention of this book, which is a bit of a black mark against them as this book combines the nuts and bolts of the vehicles with the nuts and bolts of the company that produced them, while deftly placing it in perspective of the greater social history as the following paragraph exemplifies:

“Ford, the man who in the early 1910s helped unleash the power of industrialism to revolutionize human relations, spent most of the rest of his life trying to put the genie back into the bottle (by way of creating Greenfield Village and avidly gathering the artifacts of “the simpler time and way of life” that are displayed in the Henry Ford Museum), to contain the disruption he himself (helped to) let loose, only to be continually, inevitably thwarted…Fordlândia represents in crystalline form the utopianism that powered Fordism—and by extension Americanism. It reveals the faith that a drive toward greater efficiency could be controlled and managed in such a way as to bring balance to the world and that technology itself, without the need for government planning, could solve whatever social problems arose from progress’s advance. Fordlândia is indeed a parable of arrogance. The arrogance, though, is not that Henry Ford thought he could tame the Amazon, but that he believed that the forces of capitalism, once released, could still be contained.”

Posted Under: Automobiles, History | Author: Helen Hutchings | No comments yet

A Tale of Two (GM) Books »
« The Brothers Rodríguez