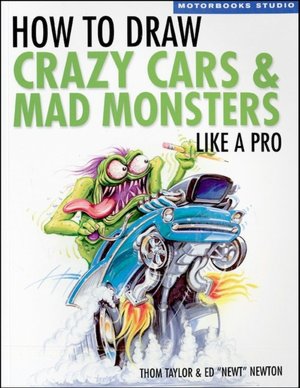 “Nothing need to be true as long as it looks real.”

This book is not for everyone. This book is not even for every automotive enthusiast, and this book may not even be for every hot rod enthusiast. There exists, having been spawned from somewhere in the very early 1950s and surviving to our present day, an odd niche of appreciation for hot rod monsters, popped eyes and snaggled teeth—gripping the shift lever of some luridly exaggerated street rod, all slicks, engine, and bellowing smoke. Some of these designs have become iconic, especially those associated with Ed “Big Daddy” Roth. This book, then, is for those of us who, admittedly or no, inhabit this niche.

How to Draw has few if any competing books, but that did not deter Taylor and Newton from crafting a book with many virtues, chief among them the reproductions of the artworks themselves. These range from quick pencil sketches to elaborately detailed and dazzlingly colored renderings. Newton had been there—in Roth’s studios—from the beginning and one cannot help but admire the bold complexity and the bizarre whimsy of his work. Most of the illustrations are his, but several other artists are represented; and although all of the works are exaggerated cartoons, several different styles emerge. The book is strong in design—the graphics, layout, color reproduction and the quality of the paper are more than adequate. The book is sprinkled too with vintage photographs, both of the artwork and the artists, and this is always welcome. How to Draw even has an index.

There is included a brief history of the genre, admitting that its origins are obscure, suggesting an evolution of the form and offering as possible progenitors the artists associated with Mad Magazine, especially Don Martin and Basil Wolverton. Both Taylor and Newton put forward Introductions, both have contributed to the text, and here lies the one, perhaps significant, problem with the book. The prose has that gee-whiz, too-cool enthusiasm, with references to adolescent or pre-adolescent rebellion, as if Taylor and Newton automatically assume that their only audience would be on par with comic book fanboys. This is a shame as it is not necessarily so.

But presumably, those considering purchasing this book, although appreciative of those features afore mentioned, would want to know if the book works, that is, after studying, following and practicing the instruction and the tips therein would one truly be able to draw one’s own crazy cars and mad monsters—and do so “like a pro”? Attempting to answer this question begs the questions of innate skill and determination, but I do think that, yes, if one were assiduous and persistent in following the instruction, one would eventually achieve it. That said, however, much of the instruction and examples have a certain “zip, zip, just do this to achieve this stunning effect” quality that would be daunting to a neophyte. I obviously have enjoyed this book, and certainly recommend it to those of you who are comfortably ensconced in this particular niche, either as connoisseurs or budding artists—or to those of you who are willing to expand the aesthetics of your automotive purview.