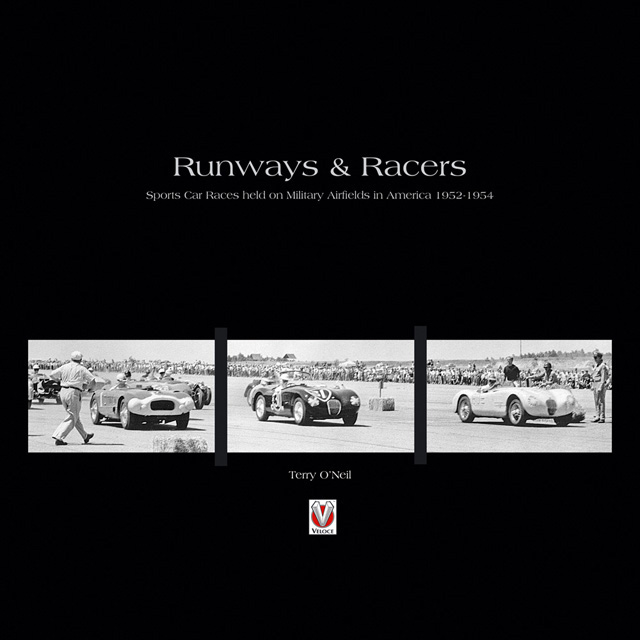 Published a year after O’Neil’s 2010 opus Northeast American Sports Car Races 1950–1959 this new book on a directly related topic is not a sequel but, chronologically speaking, a prequel. If your interests in the topic are such that you unflinchingly forked over the $200 the first book exacted, then you simply must buy the new one because the story isn’t complete without it. The matched-set aspect is evident even in the identical cover design and marred only by the printing on the spines not exactly lining up.

The press release for the new book speaks of the 2010 book in the future tense which raises the question if initially there had been a different publication schedule. If that were so, the comment we made in the review of the 2010 book about there being no mention of U.S. Air Force General Curtis LeMay’s pivotal role in hosting car races on airfields would have been less relevant. Who knew the author would have an entire book about just that up his sleeve?

While the use of airfields for purposes other than their originally intended function is not specific to only the USA, this country’s vast geography and attending cultural and philosophical divides make this chapter a particularly interesting case study in the history of motorsports in America. Concentrated on the coasts (Florida in the east and California in the west) and the Heartland (New York, New Jersey, Wisconsin), amateur sports car racers—the only kind there was at that time—found cost and logistics and, in the early 1950s, a highly peculiar points system deterrents to elevating their regional activities to a proper “sport” on the national level. Looking back on that era—even from the perspective of today’s CART/IRL and FOTA/FIA tugs of war—the lack of unity of purpose seems so obviously misguided. Had it not been for the “marriage of convenience” between the Strategic Air Command and the Sports Car Club of America that is the topic of this book, sports car racing in this country would have taken a different path.

O’Neil does a very nice job of summarizing the role of the Automobile Racing Club of America in the early history of organized racing in the US (with a particular nod to the Collier brothers’ contributions) and the place in the American psyche of track and road racing and, as important, the public’s preconceptions as to the type of person who engaged in the latter. Appreciating these things is absolutely essential to understanding subsequent events. O’Neil also points to something easily overlooked and certainly downplayed at the time by the SCCA: the need to make money. How do you charge admission when people are just standing by the side of the road to watch a race? But herd them through a gate and they become a captive audience whose money pays for your winners’ purses, improves the events, and, not least, pays for driver and spectator safety measures. Ergo, even before the 1952 fatalities at Watkins Glen that finally resulted in a ban of racing on public roads, the SCCA had plenty of reasons to think of alternatives to road racing.

This coincided with, and actually is preceded by, the military’s realization to raise funds outside of the appropriations allocated by Congress. O’Neil covers all this in laudable detail and the only quibble is one related to “dramatic arc.” It’s not until page 16 that the reader is given a crucial bit of information: what made General LeMay even think of turning to sports cars as a fundraiser? And then it takes another 200+ pages to get to the other crucial bit that bookends this story but that neither Foreword, Preface, nor Introduction even hint at (although, of all places, the book jacket does): why did it all unravel after only two years? Enter Kansas Congressman Errett Scrivner who controlled the purse strings. Usefully, his 1954 speech to the U.S. House of Representatives is reproduced. (Snide footnote: Time magazine thought it newsworthy enough to report on it in the Aug. 1954 issue—and clearly intended to paint him in a certain light by labeling him “an Oldsmobile driver.”)

In all of O’Neil’s books it is important to read the author’s explanations early on regarding data sources (newspapers, archives), data integrity (of the original sources), data presentation (in his book), and what is and is not included. This book focuses on SCCA-run or -administered or -scored events (already you can see the complexity that befuddles this entire era!) and only those that counted towards the national championship. Extensive tables of race stats are a key feature in his books; naturally they are supremely useful inasmuch as they present [a] a consolidation of otherwise scattered records and [b] a reconciliation of often conflicting information. But this time, since only two years need to be covered, there is rather more room for connective tissue in the form of narrative about people, cars, and racing. The years 1953 and 1954 are each summarized in multi-page statistical reviews, one for races on SAC airfields and one for races on other bases. That throughout the date is given in the European format (day/month/year) is sure to confuse American readers who’ll want to take, say, “3/2” as meaning March 2 instead of Feb. 3.

The vast majority of the period pictures are b/w and many are previously unpublished. They come from a large number of sources (each is credited), many are quite large, and all are thoroughly captioned. Race programs, track maps, and ephemera such as ticket stubs and forms round out the picture. Appended are 1953 and 1954 SCCA championship standings.

The Index is divided by cars, drivers/owners, venues, miscellaneous, and even newspapers/magazines. Two things the book doesn’t tell you: “Bombs Away” LeMay was inducted posthumously into the SCCA’s Hall of Fame (2007) and after his unsuccessful Vice Presidential bid on George Wallace’s ticket the press loved mocking him by comparing him to the “unhinged” General Jack D Ripper in the 1964 movie Dr. Strangelove.

O’Neil, who retired only in 2007 from the business world, surely has a few more books in him. His next stab at unearthing arcane American racing history will deal with “the famous and not-so-famous hill climbs” of the 1950s. There certainly were many, also time trials, and one can only hope that there is a sufficiently strong audience for such a specialized topic.

Something Quite Exceptional: Hugh Easton and the Battle of Britain Memorial Window for Rolls-Royce »
« Avanti: Studebaker and Beyond