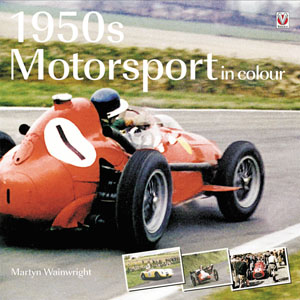 If this book had a subtitle it would say “The Races and Hill Climbs of England and Ireland.” And it should have specified that for the sake of those readers/buyers who, in the absence of other information, make their book purchases based on title searches and might well have expected something different. If names like Goodwood, Dundrod, Aintree, Brands Hatch, Prescott, Lisdoonvarna, and Shelsley Walsh roll off your tongue in everyday conversation, this is your book. Despite its regional flavor, this is an otherwise interesting offering.

Now, there is absolutely no shortage of books and other publications from this era. The two reasons that make this one different is that [a] the photos have not been published before and are thus new to the record and [b] are all in color.

The former is really only relevant to the reader who has already seen everything else on the subject but the latter is noteworthy on several counts. The events covered here fall between 1954 and 1959. The first modern color film (as opposed to the trichromate experiments of the 1860s), Kodachrome, was of course already introduced in 1935 but by the time Wainwright took these photos, the development of color film was still costly and even a bit of a novelty. He writes that he doesn’t even know why he used color film at all, knowing that “there was absolutely no chance” of getting anything published in print media. You will notice right away that the colors reproduced here look nothing like present-day colors. This is partly attributable to the emulsions then used and partly the degradation that occurred during improper storage. In fact when Wainwright discovered the transparencies after five decades in the attic, mounted in by-then rusted metal frames, he was ready to discard them. However, thinking them of sufficient interest, he remounted and eventually taught himself how to digitize them.

Wainwright started his motorsports photography as assistant to a professional who freelanced for Irish Motoring Life magazine and later took over the gig from him. The Introduction describes this as well as his equipment which is useful to know for understanding how it came to be that he stationed himself in the slow corners. This resulted in another unusual aspect of this book: often the photos are taken in more or less the exact same spot (at any one venue) thereby allowing comparisons of the different lines drivers took and the different attitudes of the cars. The photos are captioned quite extensively, describing the cars, drivers and, as applicable, race-specific commentary. A few are of motorcycles, most are on-track shots, several show pit, paddock, parking, or personalities.

Each event is introduced by a brief narrative, rarely exceeding half a page, and is by no means to be taken as more than a basic overview. Fourteen events are shown, from club level to GP. In keeping with the types of venues documented here the machinery ranges from privateer exotica like a 1913 Rolls-Royce and backyard specials like the GN Spider to all-out professional formula racers. Photo reproduction is as good as the source material allows. The Index is short but thorough; it lists only cars/bikes but by model, engine displacement, and even driver. The one exception is the four photos of race starts which are instead listed under the generic entry “Sports Car race.”

Considering what expectations a reader might have of racing photography it should be said that the photos are best thought of as snapshots. There is no technical or artistic refinement: the photographer was there, a car came by, a photo was taken. In other words, what appeal the photos have—aside from having survived—lies in the fact that they give pictorial evidence of a specific time and place.

If price factors into your purchase decision, this book will suffer from comparison to, say, the In Camera series of motorsports photo books which show more and, well, better material, and one wonders why this publisher set the price so high even in comparison to its own similar titles.