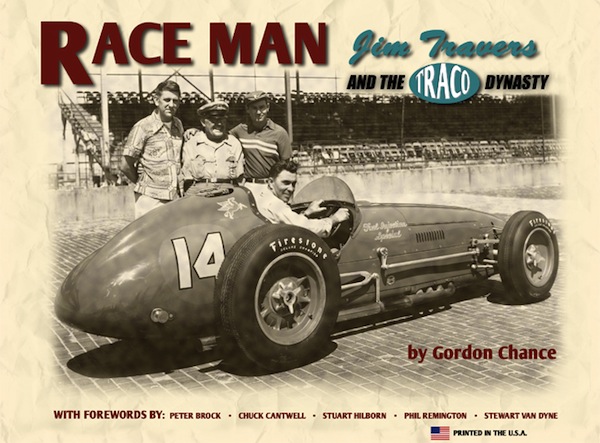 “To say that he was one of the best in his chosen field would explain Jim Travers about as adequately as saying Bob Hope was a good song and dance man.”

Being a combination of its founders’ surnames, [Jim] Travers and [Frank] Coon, Traco could just as easily have been named Contra. And “contra” was much that the two erstwhile dry lakes competitors and early flathead Ford V-8 adopters brought to the table when they joined forces in 1956. They built an enduring company and an enduring friendship, bolting together winning race engines for major race teams throughout the 1970s. Their shop on Thunder Alley (aka West Jefferson Boulevard in Culver City, California) was near those of Dick Guldstrand, James Garner, and Lance Reventlow (formerly Jim Nairn’s) along with Iskenderian and Edelbrock. Heavy hitters all of them. The general public may not have known Traco but in the professional go-fast community—USRRC, Can Am, Trans Am, Pikes Peak, Worlds Manufacturers Championship—the firm had a legendary reputation and in 2010 Travers and Coon (both born in 1920 but Coon died in 1997) were inducted into the Indianapolis Hall of Fame.

That this long-overdue story is now being told in such detail is in no small measure to author Gordon Chance being both an insider and cut of a similar cloth. At 17 he started tuning Weber carbs for Maserati of Beverly Hills (which he did so well he earned the handle “the teen tuner”), helped build a Birdcage Maserati for Bill Krause, tuned Ferraris for Bill Harrah, and then built a Chrysler Hemi-powered sports racer for John Mecoms’ racing operation. It is here that he crossed paths with Jim Travers, which would lead to working at Traco 1965–68, briefly interrupted by a stint on Carroll Shelby’s GT-40 program. An engine guy telling another engine guy’s story. 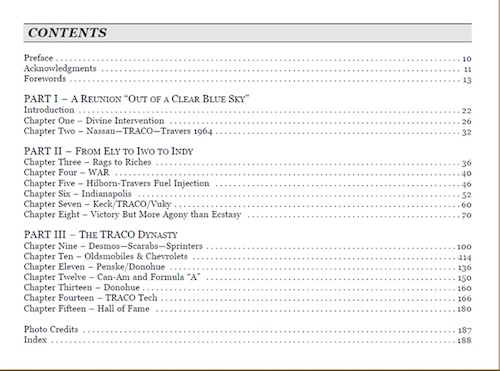 In the Preface Chance points out that one single book hardly suffices to do the Traco story justice because the firm rose to become probably the largest supplier of racing engines in the world. Chance therefore does not attempt a forensic blow-by-blow account of the Traco universe but concentrates on painting a picture of Travers the man. Which is why the book comes with this disclaimer: “The use of coarse language, ethnic, racial or social political reference is presented as authentic to the racing scene of the period . . .” But, really, forget the racing scene. Recall the era: beatniks advocating flower power and burning draft cards to make love not war. To some a noble cause but to Travers—and many of his generation—nothing but “communist hippie bastards.” So, cover the children’s ears.

Three brief Forewords (by Chuck Cantwell, Stewart Van Dyne, Phil Remington) zeroing in on Travers precede one longish one by Peter Brock who offers an appreciation of Chance’s many accomplishments. As Brock notes, “Chance’s narrative has the raw reality of truth, He’s one of the few racers remaining that were there when the great events of that period happened, but more importantly he had the insight to keep accurate notes, knowing that some day others might want to understand what really occurred and why.”

The book is self-published and has a bit of a homespun flavor in regards to layout and style, not at all out of place in this particular case. There are as many pronouncements of fact and data as there are innuendo and random banter—and all are probably good for a lot of spirited discussion. Chance himself says, “I write this book as a mechanic and a friend, not a journalist.” But therein lies its relevance as a personal and also a historical record. It is a labor of, and out of love—definitely something that may make men of a certain generation skittish. This is a book you’ll absolutely want to read if you want a really close-up, unvarnished look behind the curtain. 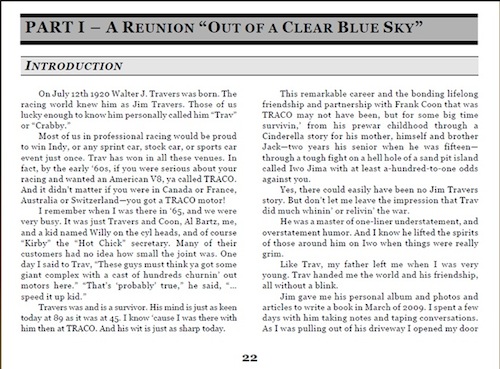 Lots of illustrations from a variety of sources, mostly properly captioned and quite well reproduced, also facsimiles of news articles etc.

The book is also available signed by the author with a certificate of authenticity for $80 and a very small number of copies at $150 are signed by Jim Travers. Signed artwork by either or both are available at the publisher’s website.

If you are a gearhead and know race shops, don’t confuse the old TRACO with the current TRA-CO—founded by ex-Traco man Jim Jones—which builds NASCAR racing engines in North Carolina.