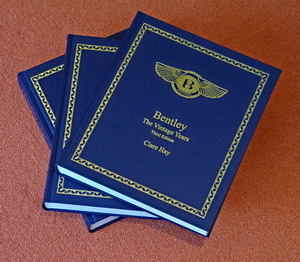 If pre-1931 Bentleys are your thing (1931 being the year Bentley purists count as The End of Life As We Know It because Rolls-Royce bought Bentley Motors to kill the competition) the dozen or so books this author has penned since the 1980s are pretty much essential. 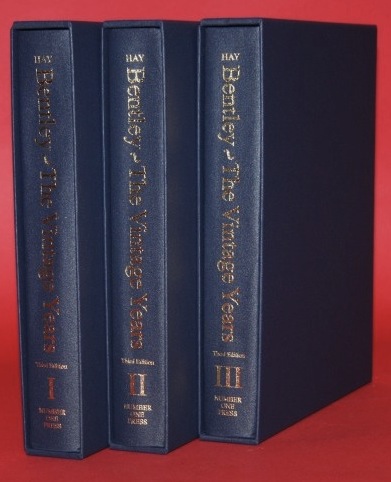 on the obsessive. This particular book is now in its third edition and is so significantly expanded that it shares little with its predecessors but the title and the core concept.

Bentleys, and Rolls-Royces, have from the beginning enjoyed uncommonly exhaustive record keeping, both by the respective companies and later enthusiasts clubs. Without such data, a book like this would be as impossible as it would be pointless because raw data, especially plentiful raw data, needs constant tending to keep the weeds out. Recording errors in period, gaps in the car or competition or ownership history throughout the decades, replicas/rebuilds or outright fakes—the best-laid plans can come apart in a hurry.

The previous two editions were cornerstones of any serious Bentley library as far as their contents is concerned. What shortcomings they had were related to, mainly, three factors: [1] the sheer inefficiency of and inherent inaccuracies in handling large quantities of data without computers, [2] printing technology and philosophy (cf. book size, photo reproduction, design), and [3] lack of urgency (maturity?) on the part of owners to be proper custodians of the unique history attached to their unique cars.

Hay joined the Bentley Drivers Club as a 13-year-old in the “non-owner enthusiast” category and, hanging around London car dealerships, made the acquaintance of Chris Renwick who would later buy the publishing firm Dalton Watson (predecessor to the current DW) that would, in due time, publish Hay’s inaugural book—at the ripe old age of 23 and owning a 3L Bentley project car—the first edition of this one. What this long-winded exposition is meant to convey is that the £400 price, steep as it is, buys you unmatched expertise. (You can also hire her, for way more than that, to research your own car.) 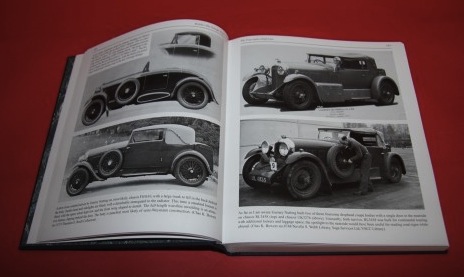 Where the 2nd ed. (1997) was able to utilize the photographic plates from the 1st (1986), the 3rd went the all-digital route and the resulting clarity is enhanced, if not made possible, by the new book’s larger size. Hay’s towering stature in the Bentley community has also given her “access to archives previously beyond [her] reach” and so the new book benefits from a wealth of new photos—many never before published, at least  not since the war—and buckets of data points. Only about 300 cars (ca. 10% of the 1921–31 production) remain poorly documented, mostly early 3 Litres. 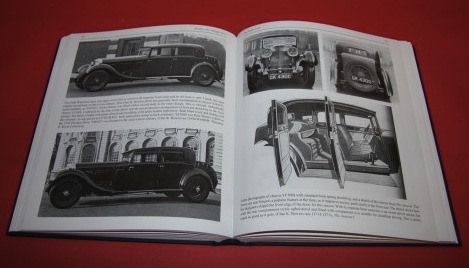 The methodology remains: each Bentley model is given a chapter that begins with a basic overview followed by specs in narrative/list form. A new feature is a similar treatment of Production Modifications which will be a crucial reference to anyone having to deal with restoration/authentication questions. This is then followed by photos of, in this order, engines, chassis, and coachbuilders in alphabetical order and divided by style and date which facilitates an organic appreciation of coachwork development. Unidentified cars or coachwork end each chapter.

Hay firmly says that the data as complied and reconciled is “as accurate as it can be” but reminds that the integrity of primary sources (i.e. Service Records from the company, Registration Records from the UK government, owner self-reports) is outside her jurisdiction.

Vol. 3 is entitled “The Tables” and that’s just what it is, offering chassis listings, photo and registration indeces, a list of show cars, ownership histories (for arbitrary, but practical, reasons recorded only up to 1970), sources for registration details, and more info about the coachwork, as well as clues to the correctness of the chassis down the years. For some this volume will be the least accessible, for others the one they’ll wear out first. Anyone who groused about inadequate column heads or the like in previous editions should know that all is well now.

Those who read the closing remarks in Hay’s Introduction within the context of her publishing history (someone bringing legal action to keep her from using her own work) will be reminded that each book could be, as she so many times in recent years lamented, her last. Perish the thought. 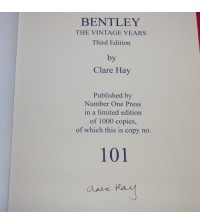 Limited to 1000 numbered and signed sets, each volume slipcased.

Available from the W.O. Bentley Memorial Foundation or Hortons.