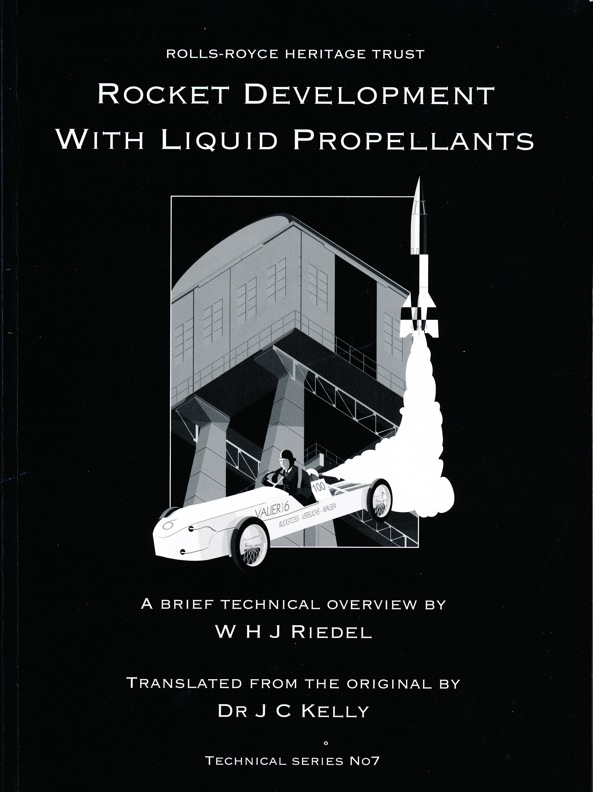 In 1939 the author of this book became Chief Designer at Germany’s Peenemünde V-2 rocket development center. Prior to that, in 1929, he was employed by the Heylandt Company in Berlin, specializing in liquid oxygen processing. While there, Riedel helped early German rocket designer Max Valier develop a series of CO2 and liquid oxygen-alcohol rocket engines and rocket-driven cars to promote Heylandt products.

This book is Riedel’s personal remembrances of that time period and the development of the technologies that led to the modern rocket age. Translated from the original German by Dr. J.C. Kelly, this monograph is a first-person connection to the past that provides insight into Riedel’s personality, mindset, and approach to problem solving.

Long considered one of the four major figures in World War Two German rocket development, Riedel assisted the British in several rocket-related projects, just as von Braun did for the Americans and other Germans did for the Soviets. In 1950, after moving to Britain, Walter Riedel wrote this technical overview to help preserve the early technical history of rocket development. His monograph lay dormant in the Imperial War Museum until 2000, when it was rediscovered by a researcher in rocket history and eventually published by the Rolls-Royce Heritage Trust in 2005.

The real fascination of this book lies in Riedel’s snapshot photos of early rocket motors and his beautiful hand-drawn technical renderings. Both take you into the mind of the engineer/artist. His drawing style clearly highlights the problem areas that needed to be solved before rocket motors could become predictable and operationally practical. The drawings graphically recreate the thought processes of the designers and creators involved, allowing the reader to follow along as basic rocket engine combustion, ignition and throttling mechanisms are developed.

Riedel’s personal photos of the first hand-built CO2 and then ethyl alcohol and gaseous oxygen-fuelled rocket engines are almost quaint in their innocent technical simplicity. They all look like something you could build yourself in a garage workshop if you had the vision and desire! Symptomatic of this “age of innocence” is a photo on page 27 that shows a young Max Valier, dressed in suit and tie, standing next to a small rocket engine, calmly dropping weights on a scale attached to the motor to measure its thrust as it runs, apparently mesmerized by the flame of the exhaust. Shortly thereafter Valier would be killed in an explosion while doing the same thing with a new paraffin/oxygen-fuelled rocket engine funded by Shell Oil. Everyone, Riedel included, misjudged the potential for the accumulation of explosive gel in the combustion chamber that could detonate when drawn into the motor’s combustion zone. The thought that rockets might be dangerous and explosive evidently had not seemed a possibility worth worrying about at the time. Later, as Riedel’s drawings so clearly display, safety became a major consideration, demanding ever more complex test stands and launch complexes.

A sparse Contents page opens the book, closely followed by an Introduction and Foreword. A brief biography of Riedel follows the body copy. The bulk of the book is divided into three chapters covering the time periods 1930–1933, 1934–1937, and 1937–1942. At the end of each chapter are grouped photos and drawings pertaining specifically to the material covered in that chapter, connected to his written material like numbered references in a patent application. As is common with RRHT books there is no Index.

While not earth-shaking in its revelations, this book is important for anyone seeking first-source documentation on the history of rocket development. As far as I could determine, this material has never before been published.

Riedel dedicates this book to Max Valier, who among other things helped found the German amateur rocket society that gave a teenage Wernher von Braun an outlet for his burning desire to reach for the moon. Riedel died a British citizen in 1966.