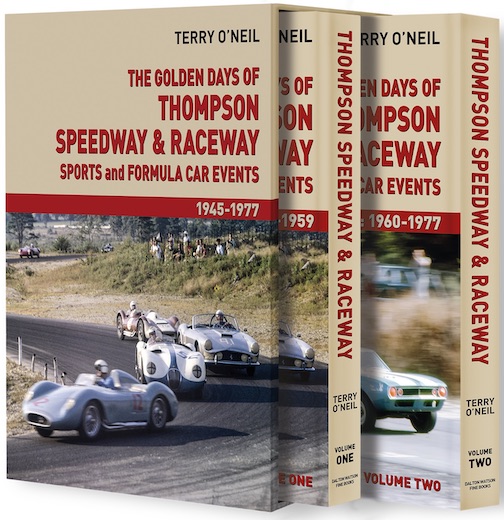 “In the early days of the road circuit it was said of certain events, there were more hay bales than paying spectators, but as more drivers entered the races, word spread and crowd numbers grew. Nobody can say with accuracy when American sports car racing turned the corner towards national acceptance, but Thompson proved to be the catalyst for this transformation.”

“Zoom! Zing! Zowie!” shouts the race poster from the day of the grand opening. You can thank the hurricane of 1938 for cutting a large enough swath of destruction on the farmland near the town of Thompson, Connecticut to make someone wonder how to make lemonade out of lemons. No one could have known then, and during the years and years of financial struggles thanks to “the fickle mood swings of the public” or the tugs of war between the principals or the global fuel crisis, that Thompson would remain in business to this very day, still be family-owned, and acquire an exceptional safety record (only two drivers killed in all these decades). 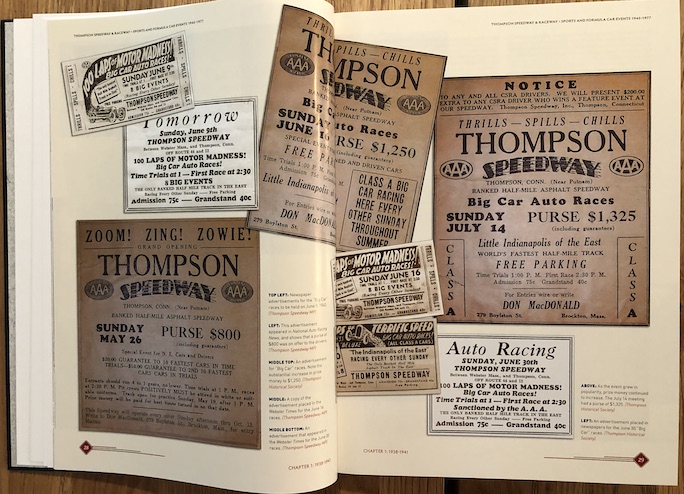 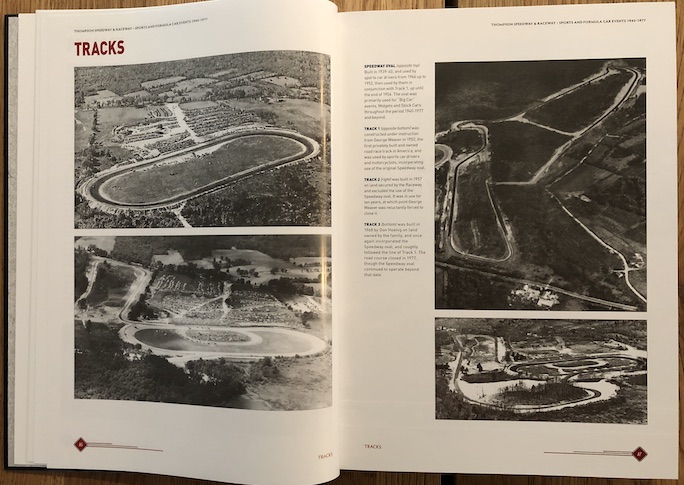 Some authors bounce all over the map, but mixing topics often has mixed results. O’Neil has found a niche and owns it. Few have plumbed the depths of American sports car racing as he has, and his newest book (two more are already in the works) has dialed up the level of magnification to a new degree. That it should be a Ferrari-leaning Brit who has made the study of America’s “less well-documented race events” his area of interest is neither here nor there; in fact, it often does take a foreigner to look at something with fresh eyes. 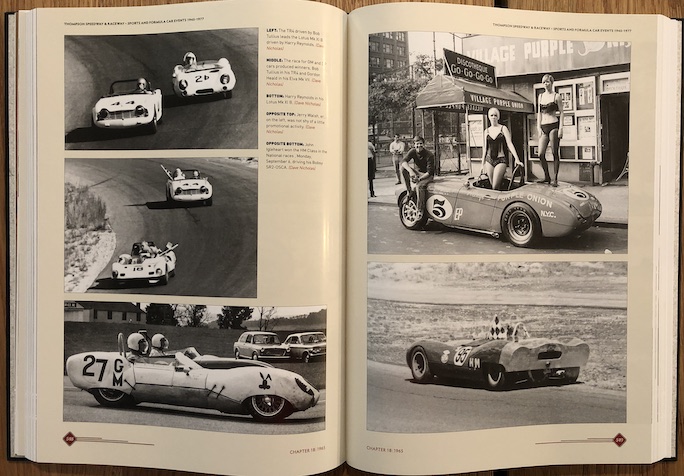 In all his books, O’Neil has made it a point to explain how the data is sourced and vetted. To the casual reader this issue is of little practical consequence but the dogmatic sort of data hound may start wars over this. In this book, O’Neil cautions that he “has relied upon the ‘facts’ as presented to me and have not added my own assumptions or judgment.” It is also surely no coincidence that each volume opens with a pertinent quote: “The best obtainable version of the truth” (vol. 1) and “Nobody knows everything, but everyone knows something” (vol. 2). 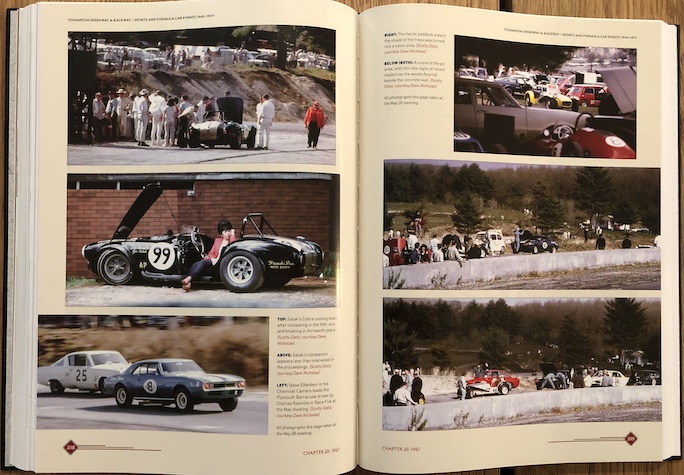 It is probably no stretch of the imagination to think that most readers will want the book primarily for the photos. There are over 1100, many previously unseen, and to anyone of a certain age (and who possibly attended races here) or interested in motorsports history they are a rich trove of information, not only because of the thorough photo captions but the layers and layers of incidental detail such as cars and people in the background, or glances of equipment and locations and the like. It’ll take a long, long, long time to be “done” with this book!

This is a Dalton Watson book so, yes, the photos are well reproduced, large (there is really only one case, p. 216, were a photo is so enlarged that it is pixelated), and printed on proper paper and nicely designed and presented. 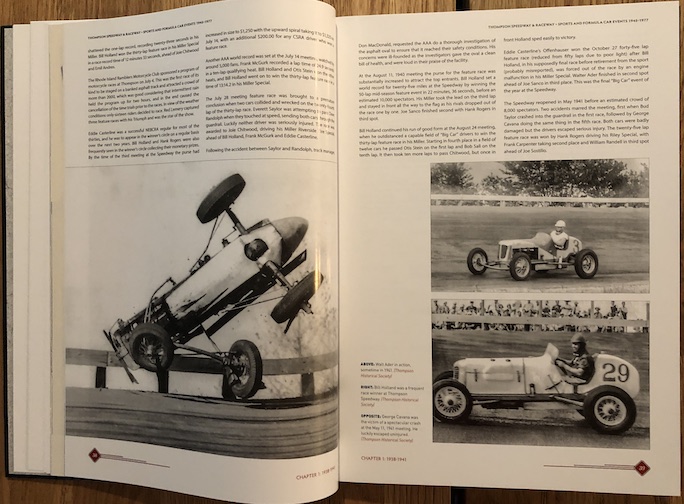 Vol. 1, The Formative Years covers 1945–59 and vol. 2, Changing Fortunes 1960–77. The book pages are numbered consecutively, and vol. 2 contains the indices (people and cars). Following opening remarks about the era in general, the idea for an “Indianapolis of the East,” the difference between a “speedway” and a “raceway,” and the various governing and sanctioning bodies etc., the book examine Thompson’s history by year and within that by event. In almost all cases race results are provided in the form of tables (below). The narrative is vivid, well organized, and connects the dots in a relevant manner. It cannot be overstated what a monumental piece of work it is to write and edit a book of this nature. There is never just one correct way of whittling—and it would be completely misguided to carp about whatever someone else may have done differently. 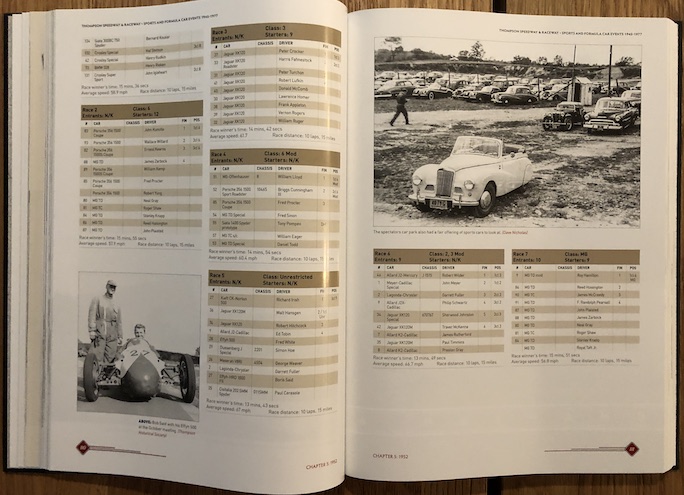 Aside from all the race-specific action covered, the book also gives a good idea of how hard it is to run a race track profitably and how hard it was for the original principals (John Hoenig as landowner and George Weaver as leaseholder and raceway manager) to find common ground. 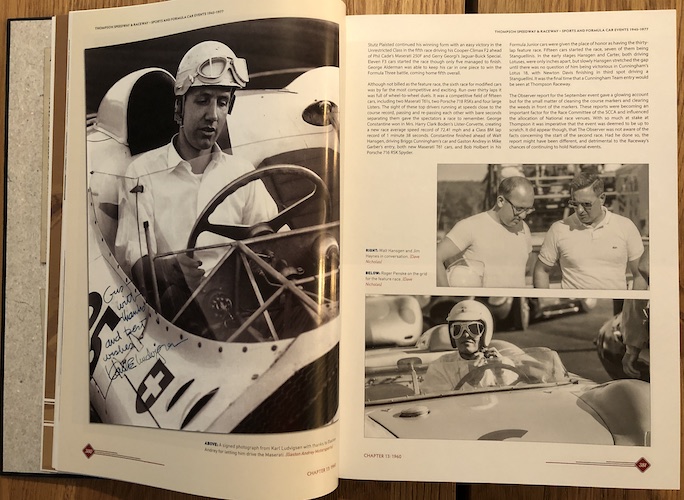 The fellow on the left page . . . you know him as the wielder of a mighty pen but here is Karl Ludvigsen before all that became the main theme of his life, testing someone else’s Maserati T61 in 1960.

This is a niche subject but even so it’s hard to see how only 500 (signed and numbered) copies can possibly be enough! If the price makes you hesitate, think back to O’Neil’s first three books that were published with Veloce—a perfectly fine and important outfit—and consider how much more book you’re getting in terms of content and design. 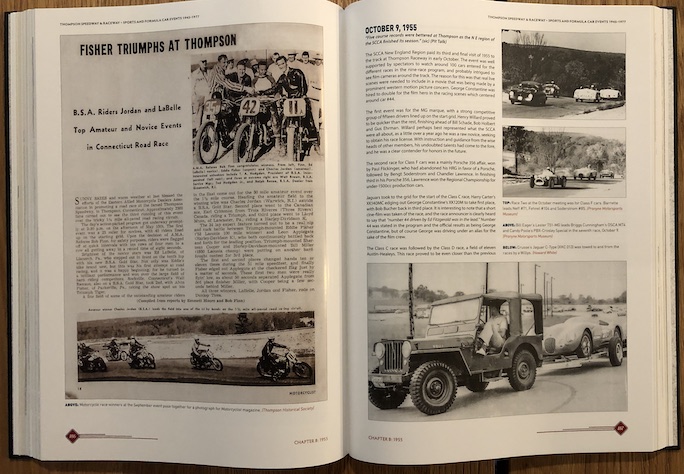