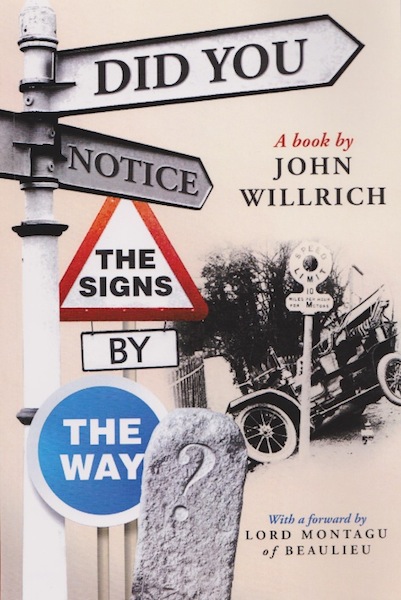 Here I must declare an interest. During the 1980s, I persuaded John Wilrich, a colleague at Beaulieu, to turn his researches on road signs into a manuscript for a publisher. The agreed publisher then cut it from their list and it has lain dormant until Ralph Montagu has recently overseen the editing and publishing of those researches.

Many enthusiast collect a variety of signs, including road signs, to adorn the walls of their garage or study, but how many know the history of those signs? This book is a comprehensive look at the “wayside” signs that over the years have appeared at the side of tracks and later roads. The book starts with a short history of our roads. Then came the milestones and other “way markers” and some crude sign posts. Incidentally early sign posts tended to be placed high up in hedges or on top of banks so they could be more easily read by travellers on horseback. For years there were no statutory requirements for local authorities to put up signs. Some of the first signs were there to protect property, saying things like “Any persons wilfully injuring any part of the county [Dorset] bridge will be guilty of a felony and upon conviction liable to be transported for life.” Tough words.

The author goes into speed limits and explains the red flag requirement.  Incidentally I did not know that the so called “red flag” act of 1868 which required a person to walk 60 yards in front of a “locomotive” (later of course to be applied to cars) did not state the age requirement of the person so walking nor the size of the red flag!

It was the cycling boom of the late Victorian and Edwardian period that caused the first road signs as we might know them, most of which related to dangers ahead and were put up by cycling clubs not the council. When the motorcar came it was necessary for many more signs to be erected, the majority being put up by the AA and Motor Union and the RAC. It was not until 1930 that illustrated signs became standardized.

An interesting aside, the first level crossing signs had a locomotive with the 0-8-0 wheel configuration. Later this was changed to 4-6-0 and later still to 0-6-0.  The UK schools sign started as the “torch of learning.” It then changed to a playground sign of two children playing with a ball and still later changed to a couple of children in school uniforms  with hats and caps crossing the road. This was then criticized as being “middle class” as not all children had school uniforms, satchels, and hats!

There is an interesting chapter on the temporary signs (often weight limit signs on bridges) that were erected during the war. This is a well-researched and informative book on a subject many of us may have overlooked. Its been worth the wait.

Thelonious Monk »
« Zeppelin: the Story of the Zeppelin Airships