The Roycean: From Manchester to Crewe, via Derby, No. 4 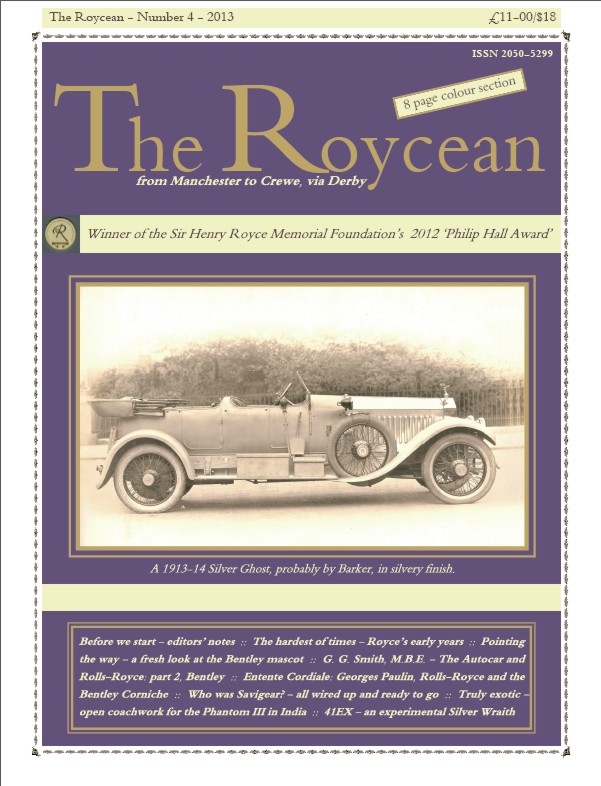 The people have spoken, and they are voting with the one thing that has to be taken seriously—their wallets (and this despite a nominal price increase, the first one for that matter). Proving that there is a demand for the scholarly side of Rolls-Royce and Bentley matters, this British annual journal conceived and administered by Messrs Clarke, Tom and Morrison, Will has seen a fourth edition. Really serious readers will particularly delight in this news as it means that an index—promised for the fifth volume—to properly mine the wealth of information is a realistic prospect.

Moreover, a patroness of the Sir Henry Royce Memorial Foundation who wishes to see interest in the Company’s history be kept alive sponsored an award to recognize “significant contributions to Rolls-Royce historic research.” Fittingly named the Philip Hall Award in recognition of the SHRMF’s long-serving archivist of that name, the 2012 award was bestowed upon The Roycean. This award is not just a lukewarm handshake and a piece of faux parchment from a certificate mill, it comes with a tidy sum of cash, a £1,000 that will buy a few drinks and make the next volume even better!

The Roycean, as all such undertakings, depends on the generosity of its volunteer contributors. In this edition there are a few less than in previous ones and some of the material was/had to be penned by the editors—also entirely common for all such undertakings, sigh—but this is neither here nor there. Former Praeclarum editor  (the magazine of the Australian club) David Neely shares an appreciation of Royce’s life, Tim Forrest reviews the 1912–14 Alpine Trials, editor Clarke offers a look at Alpine Trials driver and coachbuilder James Radley as well as Field-Marshal Montgomery’s Rolls-Royces, and S/SC series specialist Davide Bassoli examines Radford conversions while editor Will Morrison presents Radford designs by George Moseley (who later went to H.J. Mulliner) of Seary & McReady. If you follow the Rolls-Royce literature you’ll recognize all these names so you know what to expect. No Bentley-centric contents in this issue, but some of the articles obviously apply anyway.

There’s for the first time an 8-page color section (plus the color covers), still anachronistically banished to the center of the book and, worse, not all referenced in the respective articles because some are unrelated and just there for general interest. On the other hand, readers of this sort of specialized material can be expected to recognize what goes with what so this should not result in undue confusion.

About a third of the 800 copies printed remain so it’s not too late to vote with your wallet!

The Roycean: From Manchester to Crewe, via Derby, No. 4