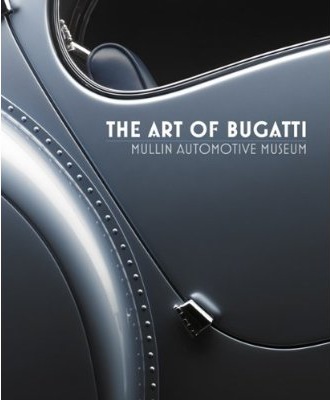 The book title notwithstanding, Peter and Merle Mullin’s museum is not just about Bugattis or, for that matter, cars. They do feature prominently but the purpose of the museum, which opened in April 2010, is an overall celebration of Art Deco in its totality, from artwork to furniture and cars to lighting. The extended Bugatti clan itself is a prototypical microcosm of activity in the decorative and functional arts: Carlo B. furniture and artwork; Rembrandt B. sculpture; Lydia B. painting; Ettore and Jean B. cars and boats.

Housed in the former premises of LA newspaperman Otis Chandler’s Vintage Museum of Transportation and Wildlife, Mullin had the almost 50,000 square foot space redone in an Art Deco theme. From the vintage signage to furnishings and surface treatments, the display floor evokes the look and ambiance of the Paris Auto Salons of the 1930s. Not all the cars on display are from that period, though, and not all of them are Mullin’s. Several of the newest Bugs, for instance, are loaners from the factory. If there’s one thing transportation-related missing from the museum it’s a Bugatti train!

While Mullin describes himself as having a passion for cars since being a little a boy, now some six decades ago, it wasn’t until a 1980 photo shoot in which Mullin’s Paul Williams-designed colonial home served as the backdrop for a 1948 Delahaye 135 MS that he felt his soul stirred by something new and wondrous. He considers the encounter life changing—and it did change not only his but that of the collector car scene in general. As the head of a lucrative executive compensation, benefit planning and corporate insurance consulting firm he had significant resources to throw at his car purchases but he—and this is what separates the collector/horder from the connoisseur—made considerate, mature, discriminating choices. His museum, and this book that presents it to the wider world, are a fine testament to a man with a purpose.

The book, incidentally, was launched at the 2010 Pebble Beach Concours d’Elegance where Mullin cars are veritable fixtures. The three authors are experts in different fields. Adatto, when not presiding over his Seattle construction firm, is an authority and author on classic French automobiles. Japp is a 20th century art and design specialist and expert on the work of Rembrandt and Carlo Bugatti. Kruta, an economist by training, parlayed a thesis he wrote on Bugatti into a career as marketing assistant at Bugatti Automobiles S.A.S and now has the enviable job of Head of Tradition at Bugatti; and he has co-/written several important Bugatti books. But writing on its own, no matter how accomplished and competent, would still only make this book just another in a long line of Bugatti books. You could take it or leave it; the quality of your life would not be affected. Add Michael Furman’s photos, along with the overall sublime production values, and you have a singularly desirable book.

Various Forewords and Introductions lead into an overview of the Bugatti family of artists followed by the Bugatti family of cars, first the 1925–27 race and then the 1922–51 road cars. In each case, the genre as a whole is described in sufficient context and detail but the reader ought to bear in mind that the purpose of this book is not to be an in-depth marque history but a guided tour to Mullin’s museum. Individual cars in the collection are presented in chronological order, their descriptions including owner (if applicable, competition) histories, construction features, and specifications. All the modern photos are by Michael Furman and they are supplemented with a rich trove of period photos, coachwork drawings, and ads etc. from a variety of sources.

A key part of Mullin’s collection are the cars from what is now called the Schlumpf Reserve Collection which consists of mostly unrestored cars the French Schlumpf brothers had acquired from US collector John Shakespeare. The story of the chain of ownership as told is factually correct but the Schlumpf part of it is so sanitized as to not fully convey their aberrant and literally criminal ways. This is, of course, irrelevant to the story of Mullin’s museum (although their hubris is a poignant counterpoint to Mullin’s approach; recall the above comments re. horder vs. connoisseur) but for the sake of the reader new to the subject a spade should be called a spade: the Schlumpfs plundered their companies’ coffers for decades, jeopardizing their employees’ livelihoods, all to satisfy their manic desire to amass a private and for many years secret museum of almost 500 vehicles.

A relatively recent development is the 1925 Type 22 that was raised in 2009 after over 70 years from its watery grave in an Italian lake; its story here is accompanied by car collector/race driver Miles Collier’s very intelligent commentary about the pros and cons of leaving this utterly unique find unrestored. A chapter definitely new to the record is that of Jean Bugatti’s personal car, a 1939 Type 64 that, had it been finished, would have carried coachwork to his own design. Due to his sudden death it remained unbodied all its life and Mullin, who owns the fully restored chassis (shown in an excellent top-down view), has work underway to have modern craftsmen create a body based on historically accurate assumptions as to Jean’s intentions and the capabilities and design idiom of the time. Expect to see an Atlantic-inspired finished car in 2011 at Pebble Beach! A separate chapter covers the rebirth of the marque under VW (the curious reader will have to look elsewhere for an explanation why VW bought Bugatti. Another story of, not hubris in this case, but ego . . .) and examples of five modern cars at the museum before the book ends with a 20-page look at furniture, fine art, carriages, and the You-You boat. There is a quite substantial reading list but no Index.

Furman’s photos are worthy of their own review and we have heaped praise upon them in our reviews of most of his other books elsewhere on SpeedReaders. It is no exaggeration to say that he ranks among the most accomplished car photographers and if you are unfamiliar with his print work, there is hardly a more impressive introduction to it than this treat of a book. Furman realized long ago that the only way he would see his photos in a book that made him proud was to become a publisher himself and thus founded Coachbuilt Press. He has by now produced a half dozen super deluxe small- or limited-edition titles, using premium paper and the finest printing technique. And by producing his books entirely in the US he proves wrong the publishers who strive to do likewise but insist that the only way to hold the price down is to go overseas. Seeing work on this level is an inspiration to all of us to aim higher and try harder.

Advanced Engine Development at Pratt and Whitney »
« You Can’t Wear Out an Indian Scout: Indians and the Wall of Death