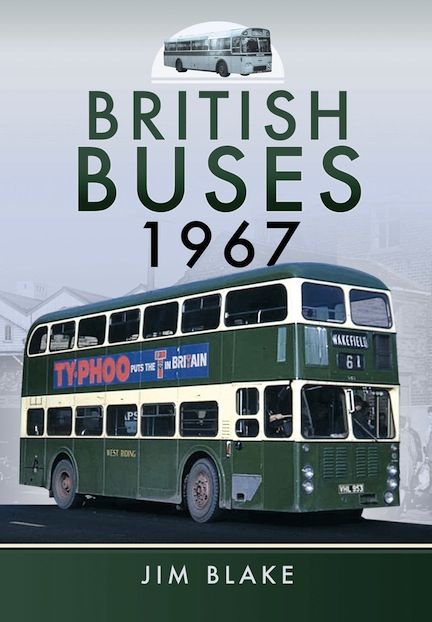 “Many municipal fleets had originally begun as tramway systems, most of which converted to trolleybus operation in the inter-war years. In turn, by 1967, trolleybuses were themselves being replaced by motor-buses and only a few systems remained. All would be gone within five years.”

1967 is the year before private and semi-nationalized operators were consolidated into the National Bus Company or Passenger Transport Executives. It is also the year that Blake pegs as the one in which Great Britain “ceased to be a major world power.” And while one may not have an obvious or inevitable connection to the other, there is one for those who like Blake are steeped in British history and especially British public transport history. A teenage trainspotter, Jim Blake (b. 1947) has been at it for some six decades, and published widely on trains, trams, trolleys, and buses. He also started the North London Transport Society.

Someone new to the subject may want to start with Part Three of this book, “A Brief Look at the Bus Enthusiast Movement” which also addresses questions of preservation and museums. Initially derided as cranks, the scribbled notes of the comings and goings of thousands of buses etc. (serial numbers, registration numbers, time and date, location, operator, livery and so forth) that such enthusiasts would amass on weekend jaunts all over the country to even the most obscure bus depots, garages, and terminals would, in time, become a critical resource to even the bus operators and government transportation agencies themselves.

In 1967 alone, Blake shot some 4000 photos—or 100,000 from 1961 to 2014—and this book intends to show a cross section of the rolling stock in service. The three-part book consists mainly of heavily captioned photos, each part introduced with a detailed narrative. Non-UK readers may well have to get into the proper frame of mind first of all so as to better appreciate the postwar political and industrial developments and their effect on the rebuilding of a public transportation system. Blake casts a pretty wide net and the book really is accessible to anyone—even if it’s “only” for the photos because they invariably do show a whole lot more than just buses: fashions, landmarks, other cars, basically the whole atmosphere of life in Great Britain in 1967. The photo captions do call attention to such aspects, along with the specific features of the buses illustrated. Only a few photos are in color, a pity since this era sported some very colorful liveries.

Readers may well be surprised at the variety of coachwork in evidence and Blake includes several very rare buses indeed, including even oddities such as tree loppers (doubledeckers whose upper decks have been shaved) or special-use buses such as the one-off whose lower deck had the entire center section opened up to carry bicycles through the Dartford Tunnel.

Bus people will (probably?) be amused to read that Blake considers London’s “New Routemaster” bus project “ridiculous” and a “vanity project” of the mayor.

A companion book (same author, publisher), London’s Railways 1967–1977, A Snap Shot In Time deals with the transition from steam to diesel and electric traction.

Posted Under: Automobiles, British, Trucks and Buses | Author: Charly Baumann | No comments yet

My Lifetime in Motorsport »
« Aspects of Motoring History