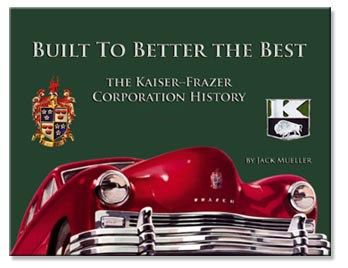 Once upon a time, in 1943, the California tycoon who had brought mass production to shipbuilding was the third-best known person in the US, right after Ford and President Roosevelt. Kaiser’s entry into the world of automaking in the opportunity-rich postwar years of 1945–47 when demand outpaced supply could have, should have been a resounding success but wasn’t. They built good, innovative cars (the first US hatchback and fiberglass sportscar, for instance), paid the highest union wages of any auto company (and also the highest cost of production), had the most state-of-art manufacturing facility, the government loaned them money (instead of just guaranteeing a loan) but by 1953 it was Game Over. Kaiser-Frazer did nothing really wrong—and there are no simple explanations.

First published in 2005 and then again in 2012, this book examines the complicated corporate history of K-F in its various permutations and their associated firms (Graham-Paige, Willys, Rototiller, farm equipment etc). It is an ideal companion piece to Richard Langworth’s 1975 book Kaiser-Frazer, the Last Onslaught on Detroit: An Intimate Behind the Scenes Study of the Postwar American Car Industry (ISBN 978-0915038046) that thanks to interviews with then still living company personalities contained much useful first-hand information but approached the subject from a different angle and with a different level of magnification. 1974/75 also happens to be the time when author Jack Mueller bought his first of what would become over the years a half dozen Kaisers. He became the editor of the Kaiser-Frazer Owners Club international’s publication K-F Quarterly and since 1991 has been the KFOCI’s club historian. He has written articles on automotive history and was used as a historical consultant by the Big Three. More than anything, it his Mueller’s knowledge of industry-wide phenomena that allows him to tell the K-F story with uncommonly sharp detail.

Mueller says a list of sources he consulted would be longer than the tightly packed 192-page book itself! His analysis of the West Law documents of judicial rulings and case histories allows him a reappraisal of the uneasy relationship between principals Henry Kaiser (“Problems are only opportunities in work clothes”) and Joseph Frazer and this sheds new light on the company’s short-lived fortunes. Some material presented here is entirely new to the record, in particular a 1949 letter from Kaiser to the dealerships regarding the upcoming models that was meant as a morale-builder but became an unintended blunder that only hastened the end.

For anyone with an interest in the business side of automaking—and not just related to K-F—this content-rich book is an enlightening read. Its weaknesses are abysmally poor proofreading and uninspired layout (crowded pages, simplistic tables etc.) and typesetting (use of “&” instead of “and” etc.). Illustrations are plentiful and on the small side but helped by the landscape page format. Each chapter has endnotes; closing remarks address the origins and role of the KFOCI, various production statistics, how to decipher VINs and body tags, and thoughts on owning a Kaiser; the Index lists people only. The C-119 and 123 aircraft are also discussed.

Psycho, The Birds and Halloween »
« Some Unusual Engines