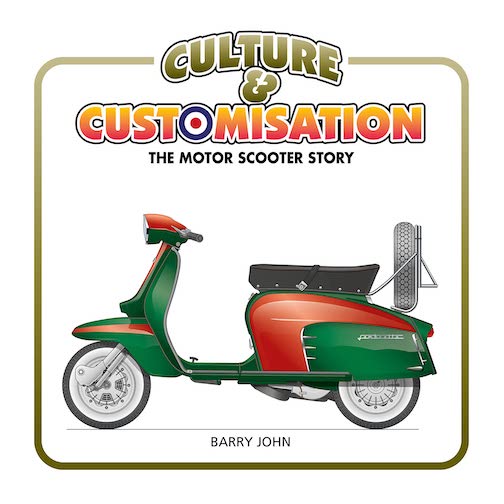 The first true scooter that author Barry John records and shows in this book for he is also the illustrator, is the Autoped, built and marketed in 1915 in New York City. Although the two-stroke engine was first developed at the beginning of the 1880s, it wasn’t until the aftermath of World War Two that the scooter came into its own although it wasn’t in the US.

Remember not only were Italy and Germany defeated but they’d also had their manufacturing plants badly bomb damaged not to mention they were limited by the terms of the surrender to what they were permitted to rebuild. Yet, their populace badly needed some means of getting about. Two men/two companies in Italy to the rescue: Enrico Piaggio established Vespa and Ferdinando Innocenti chose to name his Lambretta after a suburb of Milan. Those two have dominated the scooter market worldwide ever since although others—such as Cushman, Fuji, Heinkel, and more—have been in the mix too. With this book, John shows and tells of many including the delightfully named company and scooter, the Baiai Tuk Tuk. 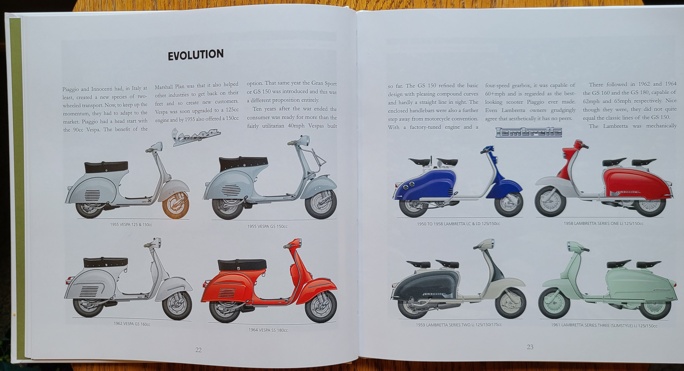 This image contrasts, on the left, some of the ‘50s and ‘60s Vespas with, on the right, models of arch-rival Lambretta during the same time frame. Remember each image has been individually created by author/illustrator Barry John.

Culture & Customisation are very much a part of The Motor Scooter Story too. Depending upon your age, you may recall, as John names the chapter “The Mod Phenomenon” of the 1960s with the Mods and Rockers who personalized and customized their scooters to an art form soon rivaled by the flower power era that followed.

Global warming condemning the two-stroke engine of the originals does not mean that scooters will be a bygone for two reasons. The first reason is that electric scooters are being produced with still more development underway. But creativity of owners, as John writes ensures “. . . the scooter itself is reproducing in ever greater numbers [with] new kids on the block . . . taking a different approach from early originals that first appeared in the post-war period.” Then too there are the enthusiast clubs as John writes of in his chapter “Global Reach and Effect” which he illustrates with the badges of 39 of those clubs around the globe including Australia, China, Croatia, Finland, India, Ireland, Moscow, South Africa, Toronto and thirty additional ones.

Some of those innovative approaches are shown on this page pair in the image immediately below. Each scooter is the offering of a different country. The Scomadi TL200 is British but made in Thailand and uses a four-stroke engine. The orange Lambretta, really a Kiska Lambretta made in Austria, also uses a four-stroke. The pale grey Neco Abruzzi is Chinese and again uses a four-stroke as does the yellow Vespa made in Italy. Others in various stages of development in a myriad of countries will utilize electric motors thus ensuring the survival of useful, affordable, and economical means to operate scooters the world over. 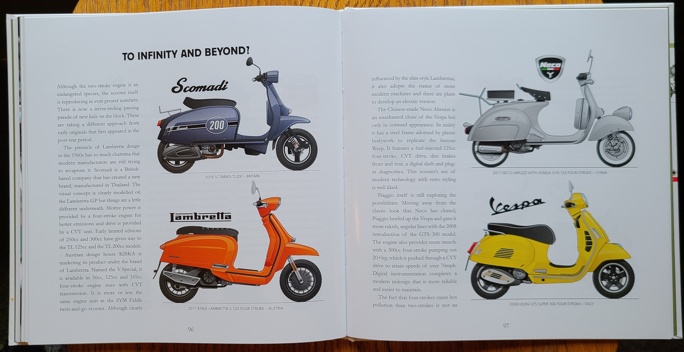 Scooters have been and are built to be used competitively as this next image (below) shows. Although the ones seen here are all land speed record challengers there are other events and races held for scooters built to being just shy of full-on motorcycles and raced head-to-head, others for rallying. 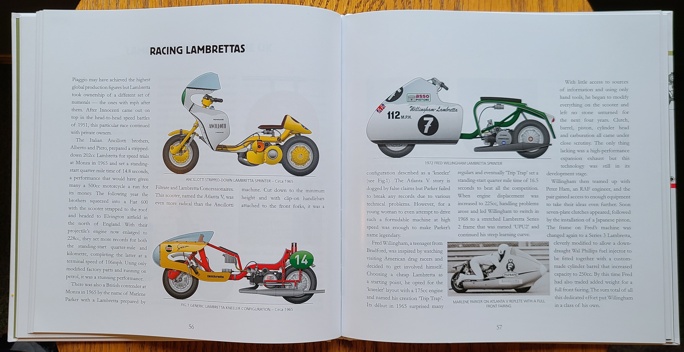 As with other aspects of this transportation-oriented hobby, there is also a scooter hierarchy of collectability. Some of the models today deemed highly collectable were less popular when new thus manufactured in smaller numbers, therefore leaving fewer survivors to restore. Among them are the 1951 German-made Bastert Einspurauto, the 1959 British-made Sun Wasps and, in the US, even some Lambrettas simply because fewer made the trip over the seas to be sold new in CONUS. Oh, and an aftermarket has sprung up too so for some makes/models there are parts, including reproduction, available.

As Barry John writes, “The motor scooter has found a home in every inhabitable continent in this world—regardless of ethnicity, creed or political ideals.” He then concludes his book with this: “Our wounded planet will no doubt recover given the chance . . . Since it is more economical for one or two people to get from A to B on a scooter than in a car, maybe the electric motor scooter can help eke out our finite reserves for a while longer.”

Posted Under: Motorcycles | Author: Helen Hutchings | No comments yet