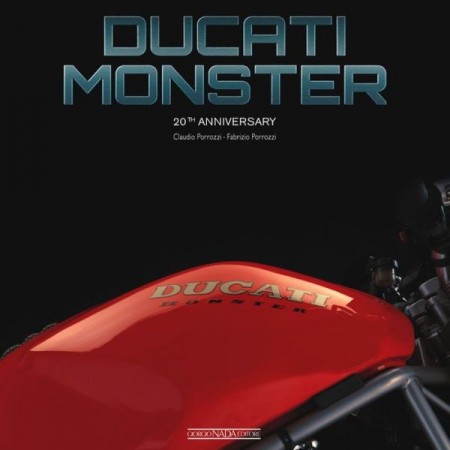 “It’s hard to find a place for the Monster in traditional market segments . . . it’s a bit of a sports bike but with the typical riding position of a touring bike. It looks unconventional, but it captivates you with its technical solutions and unparalleled appeal.”

(English and Italian, side by side and, just because they can, occasionally interspersed to exercise the ‘ole eyeballs)

Lead author Porrozzi was a cofounder and editor of the above-quoted motorcycle magazine and both he and Grizzi have published extensively on many aspects of Italian machinery.

When Ducati launched this model in 1992 the firm had a lot riding on it and was in desperate need for a homerun. Not that the previous models had been unsuccessful, quite the contrary, but Ducati needed to regain the momentum the firm had lost by not quite knowing what the next big thing ought to be. Apparently not Harley-Davidson clones, even with a catchy name . . . (Ducati Indiana).

If you’re just getting to know this quintessential Italian marque and all of the above is new to you, this book should not be your first or only one. And without knowing anything of at least some of the goodies that made Ducati famous—desmodromic valves, the trellis frame—it’s not easy to fully appreciate the important role this maker plays on the motorcycle scene. (The book also won’t tell you that Claudio Porrozzi is photographer Fabrizio’s older brother.)

Over the course of its 20+ years of production, a quarter million Monsters were sold which, in some years, accounts for two-thirds or more of Ducati’s output. Not bad for a bike that started out by raiding the parts bins, something that would continue for a number of years: engine and trellis frame from the 900SS, forks from the 750, brakes and wheels from the 851 superbike etc.—actually the tank, and a very nicely shaped tank it is, is about the only significant design item crafted specifically for the Monster—and this Frankensteinian aspect is probably what earned this model the “Monster” nickname. That moniker is, incidentally, commonly used in its English form in Italian (not Il Mostro or some such) and another English word relevant to the Monster that is used in both languages is “naked,” here referring to the exposed engine and frame and absence of fairings and screens. The Monster was not the only or even first bike in the over-500 cc class to this design but it came to define the genre.

In any one model year the Monster existed in several versions, each customizable to unusual degrees. Depending on spec and configuration, anyone stepping up from scooter to their fist proper bike could run an entry-level 400 cc Monster the same as an advanced biker could buy a multi-valve water-cooled 1200 cc Monster with superbike performance and further modify it to all-out race machine. No other bike does quite that and this is what this book presents.

Interestingly, the authors says that “various versions” of the story behind the origins of the bike exist and even then-design chief Miguel Galluzi, quoted here as recent as 2013, does not settle the matter. Whoever hatched the idea, what is clear is that Cagiva, which then owned Ducati (now owned by Audi, i.e. VW), wanted to return to “simple things” in terms of suspension, brakes, wheels etc. and the Monster with its particular frame and geometry was the solution. Galluzi calls it “a personal need” of his that, thankfully, resonated with the media and the buying public.

With support from the Ducati archive and spiced up with many, many photographs, advertising pieces, and the occasional drawing the book unravels that story model by model, year by year, spec by spec. Also considered are factory/factory-sanctioned “replicas,” custom bikes for show and street, and record-setters.

As so often with books by this Italian publisher, the English translation is sometimes iffy, offering, for instance, such gems/riddles as this one from p. 52: “As a result there have always been replica versions and not even the Monster is an exception to this rule. Obviously this time the replicas have been adapted to a bike without fairings but not for this reason are they any less captivating.” On the plus side, and just as typical for this publisher, the book is very design-intensive, boldly laid out, and nicely printed.

The Monster is a properly iconic motorbike with a serious pedigree. Read the book and then go out and try one on for yourself—one will fit and if it won’t, you can easily make it so!