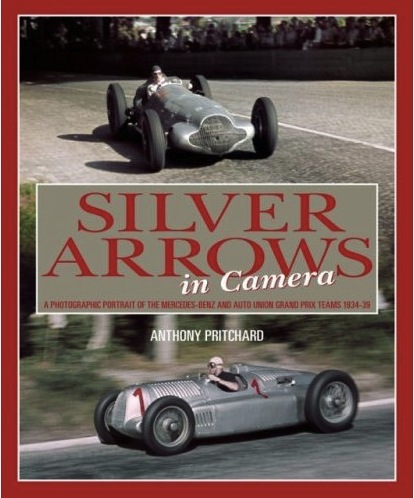 This book delivers more than its subtitle promises! If the word “photographic” were missing from the title, no one would feel short-changed by the contents. Not only is this book an excellent source of period photography, it also contains a thorough textual treatment in the form of extensive photo captions as well as contextual narrative. That said, the book does keep a narrow focus on the car-specific aspects of the story, which, considering that the history of Germany’s Auto Union and Mercedes-Benz Silver Arrow cars of that era is utterly inseparable from the political context of the time, is a useful qualifier to keep in mind. Put another way, the story of Nazi Germany, Hitler’s fascination with cars in general and motorsport in particular, state subsidies, the propaganda value of victorious racing efforts, political pressure exerted on manufacturers, or cronyism are referenced where they materially affect the competition history of the cars but the book neither dwells on these matters nor attempts to unravel the many, often unholy, alliances. And it certainly isn’t in its purview to pass judgment.

Pritchard has been writing about motor racing for 50 years and covered all the storied marques and drivers. The era of the pre-World War Two Silver Arrows certainly ranks right up there with the most important technological advances in racing history. That Pritchard has a mind for details is evident already in his Author’s Notes in which he explains his reasons for using a specific nomenclature in listing the cars, and the predicament posed to photo identification (and there are some questionable cases) by, often, race numbers being changed between practice and race. Early on he also takes an entertaining look at the possible origins of the “Parsifal” moniker Karl Benz adopted for his 1903 car and addresses the merits of the “official” story of how the cars came to be silver, not white. (Spoiler alert: the issue remains unresolved—and this finding is as state-of-the-art as it gets because Daimler-Chrysler held a symposium on just that subject in 2007, the year before this book was published.) We ought to fast forward to one further point of disagreement among the cognoscenti: the use of the swastika emblem on the cars. It is less often seen on Auto Union cars and the author (p. 189) sides with those who take that as evidence that Auto Union “was a less fervent supporter of the Nazi cause.” Again, as explained in the opening paragraph, this is exactly the sort of thing the book does not micro-analyze.

Following a summary of the pre-1934 history, especially the early French Grands Prix, and brief remarks about political developments in Germany, the book devotes over 100 pages to the 1934–37 750 kg cars. Their story, and that of the subsequent 3 and 4.5L supercharged cars, is presented in chronological order and in satisfying detail. Each race is accompanied by a data panel listing the top 6–8 finishers (by position, race no. driver/car, total time), regardless of marque. Regardless of position, every Auto Union and M-B car in a race are listed in boldface, and the overall fastest lap is stated. Separate chapters cover record attempts (excellent photo selection!) and hillclimbs, each listing complete results.

It boggles the mind that 70 years after the fact never before seen photos should still be lurking in archives but they do. Most importantly, this book shows, likely for the first time, a selection of 13 COLOR photos (mostly of the 1938/39 French and Swiss GPs and one from 1939 Donington) by that grand photographer Louis Klemantaski, a rarity for the time and especially this photographer. The photos are sourced from the two manufacturers’ archives as well as the Fellowes, Klemantaski, and Monkhouse collections and also LAT’s Autocar files and Getty Images (which sprang from the Radio Times Hulton Picture Library, a singularly important source for early photojournalism). Of the many photos that are new to the record, most are probably of Auto Unions. In addition to them and M-B cars there is quite a good selection of Alfa Romeo photos since that marque was among the more prominent competitors of the day. The V12 Delahaye is covered on one spread. There are also maybe a dozen period race posters. Readers already very familiar with images of those cars will be particularly interested in a fine selection of photos of the German AVUS track that show the extreme steepness of the banking. Naturally the photos are not only of interest in terms of cars and racing but also the prewar world in general, from landscape to fashions.

Closing chapters contain brief bios of varying length of each marque’s drivers accompanied by a period photo (no beating around the bush here: Stuck – “A reasonable driver but a loud-mouthed, self-serving bore.” Lang – “Nothing more condemns the likes of von Brauchitsch and Caracciola than their patronizing, class-ridden snobbish attitude towards Lang.”), and remarks about the post-1945 years that address specials, the post-1950 resumption of German racing efforts, and DKW passenger cars. Appended are Silver Arrows survivors by chassis no. and whereabouts, detailed specs, a VERY useful description of the 1906–51 GP formulae (the latter year mistakenly called “1946” in the Table of Contents). Bibliography; Index divided by vehicles/teams, people, and races.

Not cheap, but considering how much time you will spend absorbed in the study of the photos, well worth the money!