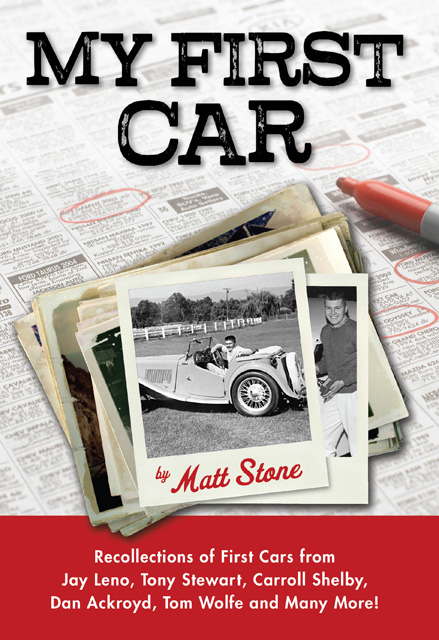 Right out of the box this book looks as if the people making it had a good time! Clever cover art. Smart book jacket blurbs. On the Impressum page even the editor and designers got to list their own first cars. Drum roll, please.

Take a look at the circled ads on the cover. Before you feel bad for the folks who had to settle for a Mitsu Gallant or Honda Odyssey as their first car—well, there is a Saleen Mustang—realize that many of the 60 people who tell their stories here started similarly low on the automotive food chain before fame and fortune gave them the means to move up.

The ink was still wet on Keith Martin’s driver’s license when he bought himself a bugeye Sprite. Leno didn’t even have a license yet when he got his clapped-out 1934 Ford pickup. Danica Patrick hauled her beaming 16-year-old self around in a Mustang Cobra. Think you have to be young to experience first-car jitters? Tell that to Andy Warhol who got his license at 56—and made up for waiting that long by buying two Rolls-Royces. Cheap ones, he insists. As if it matters when you’re Drella.

These names give you an idea of what to expect. No matter what activity you’re into, from cooking (Guy Fieri) to golf (Arnold Palmer) to rocketry (John Glenn), you will recognize many/most of these folks. Fame and fortune, in varying degrees, are in fact the common denominator of the colorful assortment of people presented here. But, again, remember that when they started out they were “just like you and me”—so their experiences are not hothouse, overwrought excesses of artifice but the perfectly normal guy/gal-next-door sort of thing. (Well, the gals among readers will have to use their imagination—they are represented by only three examples.)

The other common denominator is that they either began with or at least developed along the way a pronounced interest in automobiles. Is it really possible that no one started out on a motorcycle?? Must be an American thing, which pretty much everyone in this book happens to be.

Even if Matt Stone weren’t the author of this book, he probably would have been in it anyway. Sixteen and strapped to a 1971 Olds 4-4-2—his family’s insurance man must have loved him! With his long and varied professional and private automotive interests, Stone brings just the right sensibilities to the book. No hyperbole, no pompousness, just good stories well told. Much of the narrative is in the protagonists’ own words and that some of them may sound better than they really do is probably thanks to Stone and his three writer friends plying their craft. The stories here are not about mere transportation but life, dreams, first love, venturing into the world literally and figuratively. “Coming of Age” in other words. American readers may simply not appreciate how uniquely American these stories are in terms of cultural undercurrents. From the age at which people get licenses here to the—damnable—ease with which they get them, “only in America” is what many readers in other parts of the world will think.

Nice photos, excellent typography, a pleasing design (don’t skip over these adjectives; they many not sound like much but they mean just what they say: very, very good work) with a bit of a scrapbook flavor, even an Index that fits the bill—as we said at the beginning, the people who put this book together had fun. So had the people they write about. And so will you.

If you want your copy autographed and/or personalized mail it to Stone and tell him what you want inscribed—he will mail it back to you on his dime! C’mon, who does that?? The man who is Editor of Motor Trend Classic and Senior Editor of Motor Trend magazine, SPEEDtv commentator and book author, the man who insists he’s “hardly interesting enough to track on Twitter, My Space, or Facebook.” If he isn’t, who is?

Brands Hatch: The Definitive History of Britain’s Best-Loved Motor Racing Circuit »
« Race to the Sky: The Wright Brothers Versus the United States Government