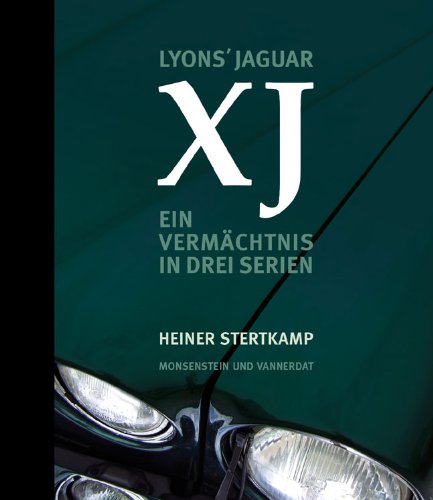 (German) “An E-Type for the whole family” is what company founder William Lyons (1901–85) had in mind for the XJ model, the last he would be involved with. Attending the overwhelmingly successful New York launch of the E-Type, “Mr. Jaguar” was besieged by dealers and customers clamoring for a sexy four-seater—and the always entrepreneurial Lyons was always looking for the next big thing.

And with over 400,000 copies built between 1968 and 1992, the XJ would indeed become a very big deal for Jaguar. Subtitled “A Legacy in Three Series” this book sings the praises of a model the author (b. 1959) has been smitten with since childhood, “a car of legendary beauty; fast, quiet and safe.” It was all that, even won Car of the Year several times, but to many who owned one in the 1970s a whole lot of other adjectives come to mind. If you ever did, you’ll be reading this book waiting for the proverbial other shoe to drop: the car couldn’t possibly have been as good as this book makes out!?

There was a reason that a different proverb once had currency, specifically during the era the company was owned by British Leyland: “If you want a Jaguar you need to get two—because one will always be in the shop!” Super-sexy as it was, build quality and mechanical reliability were abysmal. And no matter what tune Stertkamp whistles in regard to the XJ’s esthetics, technical merit and collectability, the marketplace is clearly not looking favorably at these cars–yet.

Unusual for German books about foreign marques, this one is not a translation but an original effort. Stertkamp is not new to the topic of Jaguars, having written a veritable standard work in German, Jaguar – Die komplette Chronik von 1922 bis heute (Heel, ISBN 978-3893658848) as well as several English books and magazine articles and also heads the German Jag club’s XJ register and is a member of the board. He laments that marque books of that sort of scope have not been able to devote sufficient space to this one series and so this new book, which also covers Daimler and Vanden Plas variants as well as tuner and racing cars (but not the XJS or XJ220), aims to improve that. While inconsistencies in the existing literature are alluded to it is not obvious what those are but one thing that does set this book clearly apart is the consideration given cars destined for export markets (modifications, specs, prices even).

The Table of Contents is commendable for its specificity. The book is divided into a historical and a technical section, the latter dominates and is divided into broad topics: coachwork, exteriors, interiors, engines, electrical system, chassis. All these are illustrated with close-ups and augmented with charts and lists of all sorts that will help the restorer and car-spotter. The text makes it easy to pinpoint the implementation of modifications by highlighting chassis number ranges.

Photos are plentiful and extensively captioned and there quite a number of exploded views such as one would find in a shop manual. Noteworthy among the photos is a series of shots of early styling studies that show the progression from the E Type theme into what would become the equally iconic XJ shape. These are done as full-scale 3-D mock-ups because Lyons was not a trained draftsman.

Appended are the aforementioned market-specific particulars, a VIN decoder, production stats based on Jaguar Heritage source material, as well as a Bibliography. Readers who don’t speak German will probably struggle with the text because sentences are very long, nested, highly polished.

While the book’s high price can be explained by its small print run and the use of high-grade materials, it may also prompt readers to expect stellar image reproduction. The reality is that there are limits when the source material is dark to begin with, which is certainly true of Jaguar’s marketing material of which much is reproduced here.

The book is very well organized and certainly in the German language spectrum, without equal. Won the 2013 ADAC-Autobuchpreis 2013 and is nominated for the German Design Award 2015.