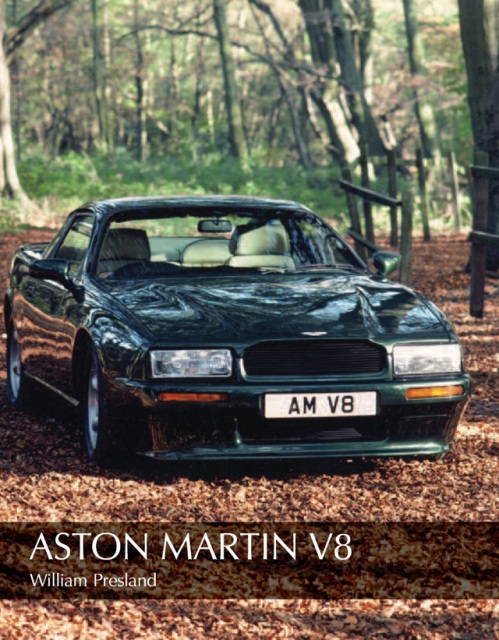 Built from 1969 to 2000 Aston Martin’s V8 cars represent a fairly late entry into the V8 segment. Customers had been clamoring for a larger mill for years and Aston began development in 1963, aiming for a 1967 release. The new car that was to go with the new engine, the DBS, did get done in time but the new engine designed by Tadek Marek took another two years. When they finally came together a competent, long-lived model was born.

Two years is also the time differential between the author buying his first Aston—at age 28—and the target he had set himself when only a teenager, the ripe old age of 30.

This long interest in the marque finds enthusiastic expression here in a thorough overview ranging from the 1969 DBS V8 (Presland’s car is a 1971) to the Vantage Volante Special Edition of 2000, a model run that would amount to a total of 5016 cars.

In terms of presentation the book is not nearly as stylish as the cars themselves. This is not a criticism, merely a regret, and obviously the author would be the first to wish it were different. If you consider the page–photo ratio you will realize that the only way so many photos can fit on so few pages is by making the photos small. This is not helped by the book’s relatively small size (7.6 x 10”). The captions are very thorough, singling out just the sort of detail that marks the writer as a knowledgeable owner. It is also evident in the types of photos that were selected that this is not a superficial “teaser” book. The many close-ups and photos of the design (styling bucks, wind tunnel etc.) and assembly are just the thing an owner, or prospective owner, would want to see to better appreciate their own car. However, as so often in British books, owners of US-spec cars are not well catered for.

Beginning with the story of the company’s founding in 1914, its many ups and downs in the hands of multiple owners are presented in a way that has the reader firmly rooting for the underdog by the time we get to the 1960s, the point of departure for the V8 topic. All the different models are covered, including special variations (cf. shooting brakes) and editions (cf. Zagato) and also the Bulldog concept car. A closing chapter looks at modifications and the firms that specialize in such work on Astons.

For each model comprehensive specs are listed in the form of sidebars. There is no buying guide or driving impressions but Brooklands Books’s reprints of road tests cover these models. At the time this book was written it was the most comprehensive account of the V8 road cars. (Race cars had already been covered in Paul Chudecki’s Aston Martin V8 Race Cars [Osprey, 1990. ISBN-13: 978-0850459739]). It certainly remains the best value for money but if you have the means to splurge you will want to know of a 5-volume, 2000-page set of limited-edition super premium leather-bound books by Kean M Rogers called Aston Martin V8 Vantage, Britain’s First Supercar. Published in stages between 2010 and 2012 volumes 5 (V580X “X-Pack” 1985–1989) and 4 (V580X “Vantage Volante” 1985–1989) appeared first, 3 and 1 are next, and 2 will conclude the project in the autumn of 2012.

Air Force One »
« The Fate of the Sleeping Beauties