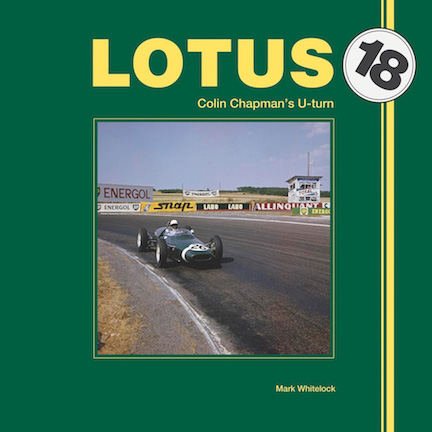 At some point in what is now lost in the distant, hazy primordial years of the past century, the thought seems to have occurred to a few racing enthusiasts that, in many cases, the history of the machines themselves might turn out to be more interesting than that of those driving them. This thought definitely occurred to the then-young members of the Formula One Register in the mid-Sixties when they began their endeavor of recording the information relating to Grand Prix racing, to include tracking the identity of the cars themselves.

This effort was to prove much easier said than done, of course.

Plus, there’s the matter of the Unintended Consequence of the Gordon Gekko types* that invaded and then transformed the market for old race cars, turning the machines from industrial and mechanical artifacts into investments, thus making the history of each car, its “provenance” as it became known, a commercial proposition. But, in the pursuit of upping the value, “liberties” have been taken regarding the competition history of some cars—not that this sort of thing ever happens at a car auction or exotic car dealer . . .

Today, a book such this is scarcely a novelty. What is a novelty is that it has taken this long for a monograph devoted exclusively to the Lotus Type 18 to appear. Thanks to Michael Oliver, Lotus Types 49 and 72 have been given serious, well-researched monographs that are among the few that set the standard for this type of book.

After building, racing, and then selling a very successful series of sports cars competing in the UK, Colin Chapman and Team Lotus turned their attention to single seaters, especially in preparation for the new Formula 2 series beginning in 1957 (engines up to 1,500 cubic centimeters displacement, 500 less than the one that had ended after the 1953 season). On paper, the Type 12 should have been successful, given that it incorporated as much as possible of the many lessons from the cars that Chapman had designed and built prior to this, with the very successful Type XI being the basis for much of the car. The Type 12 had a very lightweight chassis and bodywork when compared to most of its contemporaries. Although it used the same engine, the Coventry Climax FPF, the Type 12 was about 50 pounds lighter than what competitor Cooper Cars produced, a popular machine initially known as the Mark II Formula 2 car and later as the Type 43. It was the rear-engined Cooper that customers turned to and that won most of the early F2 events. The combination of Team Lotus focusing on its sports car program and its rather tricky Lotus-made gearbox (there’s a reason it was commonly known as the “Queerbox”) meant that the Type 12 did not make much of an impression in 1957 or 1958.

In 1958, Team Lotus decided to enter the premier league, the Grand Prix events run to the International Racing Formula 1, including those counting towards the World Championship for Drivers. The new Type 16 was not ready until midway through 1958, so Team Lotus used the Type 12 for its early forays into this new world. Amazingly, despite not much in the way of success in the early events, both the early non-championship events held in Britain and the championship events at Monaco and the Netherlands, Cliff Allison and his ailing Type 12 came within an ace of winning the Belgian GP at Spa-Francorchamps. This was due to there being a reduction in the length of championship events from three hours or 500 kilometers to two hours and a minimum of 300 km. Had the Belgian race been just another lap or two longer, it is quite possible that Allison and Lotus could have won the event, thanks to all three cars finishing in front of Allison who was struggling with mechanical ills. However, fourth was still quite a feat, given that Allison was also dealing with a broken exhaust system.

Judged solely on its looks, the Type 16 was easily among the best-looking of the front-engined Grand Prix cars to appear. It was often described as being a smaller version of the very successful Vanwall car being driven by Stirling Moss and Tony Brooks, two of the best drivers of their day, along with Stuart Lewis-Evans. While the Type 16 might have looked great, it was very much a non-entity on the track, garnering only a few minor placing during the 1958 and 1959 seasons. Little seemed to not go wrong with the Type 16, there being endless gearbox problems, mechanical ills, engine issues, and just one thing after another failing, in part thanks to Chapman’s attempt to make the car as light as possible. At one point, the Lotus Type 16 could have easily been used as the illustration in a definition of the word “fragile.”

During the 1959 season, the rear-engined Coopers and the front-engined Ferrari battled for the championship, with the former prevailing. Formerly thought as being merely good for short, twisty circuits such as Monte Carlo, by the end of the 1959 season, with victories at fast circuits such as Silverstone and Monza, the home ground of unio, it was clear that rear-engined cars were the way to go. Even Colin Chapman and Lotus could now see the handwriting on the wall.

It is this switch from the front-engined Type 16 to the rear-engined Type 18 that Whitelock suggests was Chapman’s “U-Turn.” Prior to the Type 18, every Lotus had its engine in the front. Until the recent success of the Coopers, the performance of rear-engined racing cars was quite mixed. Although the rear-engined Auto-Union cars of 1934 to 1939 had achieved some level of success on the track, that success was usually thought to be more a testament to the abilities of exceptional drivers such as Hans Stuck, Bernd Rosemeyer or Tazio Nuvolari than to the machine itself. The success of the Coopers was changing that perception.

The Lotus Type 18 was designed and built in the waning months of 1959. Although intended as a Formula 1 machine, it would also be built in versions for Formula 2 and the extremely popular Formula Junior. During the 1960 season, it would manage to win in each of these categories, with one driver in particular quickly ascending through the ranks in each formula while still racing the Type 18—Jim Clark.

While Whitelock does not include much regarding the Formula Juniors in his account (a task that might have taxed even the hardiest of researchers) what he does provide on the Type 18 is nothing if not exceptional. The focus is, of course, on the cars and the Formula 1 events, which is scarcely a surprise given that formula’s status as the neutron star of automobile racing and its history, sucking the life out of almost everything around it.

The exposition is rather conventional, with first, the background, which includes one of the better synopses of the Climax FPF, then, second, a race-by-race review of the 1960, 1961, and 1962 seasons. Third is a look at the 1963–1966 season, when the Type 18 was still on the track in various places, plus the usual statistics and analysis, variations on the Type 18 theme, with, finally, three appendices (that too many will focus on to the detriment on the overall work): individual chassis histories, race records, and the drivers.

Lotus 18 is a well-presented book, Veloce doing a very good job in that respect, as well as being well-researched and with an excellent narrative by Whitelock. It provides a much-needed addition to the literature on a racing car that is now so often neglected: the boxy, fragile, but still successful Lotus Type 18.

A very worthy addition to the bookshelf of the automotive competition historian.

* “The point is, ladies and gentleman, that greed, for lack of a better word, is good.” Gordon Gekko (Michael Douglas) in Wall Street (1987)