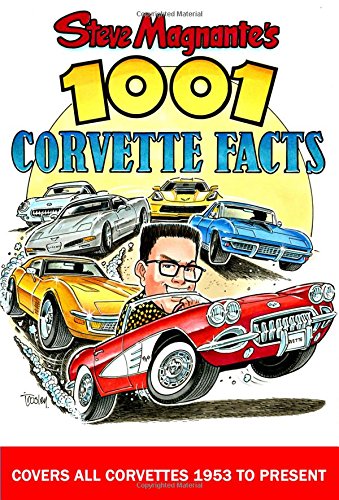 “Owning a Corvette changes your life. I know; I lived it.”

So you think you got your Corvette facts down pat, do ya?

Well . . . if you’ve ever seen Steve Magnante on a roll you’ll probably think you’re not going to want to start an argument with him. It’s not just that he’s supremely well prepared for, say, his Barrett-Jackson auction broadcasts—where pretty much every Corvette permutation known to man goes across the block—but he can hold forth, stone cold, at the drop of a hat. This is now his third book in the 1001 Facts series—the man just loves cars and their stories.

He is of course right in saying that the Corvette is “the trivia fan’s dream car” because it’s been around for so long and in so many configurations—which also means a lot of noise and nonsense has attached itself to the story. He is also on to something when he divides the C1 cars into two groups, 1953–55 and 1956–62, to better account for the differences (hence the book has 8 chapters not 7).

Each chapter is divided into 5 sections: Legend and Lore, Body and Interior, Engine and Driveline, Suspension and Brakes, Number Crunching and Press Commentary. All these are self-explanatory, and as tempting as it would be to randomly now impart some of the more juicy tidbits—especially from the Legend and Lore section!—there’s really no point. It’s all interesting and serves, as Magnate writes, to “spur curiosity, and trigger readers to dig deeper into the fascinating world of the auto industry, vehicle design, and vehicle marketing in general.”

The word “present” in the subtitle doesn’t just mean the current iteration, the C7 (the “fighter jet on wheels”) but the upcoming C8, rumored to be the first mid-engine Corvette and still at least a year away. But, as the book is about fact not fiction, there’s not really anything bankable here.

At 6 x 9″ the book is small enough to slip into a coat pocket to have handy for a quick brush-up before steamrolling innocent bystanders.