The Engines of Pratt & Whitney: A Technical History 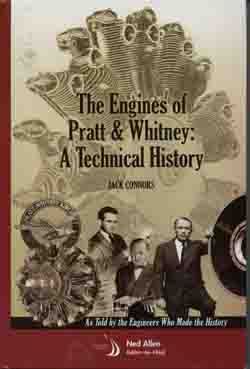 The title of the book may not be showstopper but the book is commendable on all counts that matter to a reader: it is written in an uncommonly engaging style, introduces new material to the record, makes it easy for the reader new to the subject to develop an interest in it, and is thorough enough to make the old hand sit up straight. Pratt & Whitney’s rich history in aircraft engines since 1925 has been documented on numerous occasions but not in the manner in which Jack Connors has presented it. With his wonderful New England Irish sense of humor combined with his inexhaustible technical knowledge, this book is an excellent read. Notwithstanding the fact that a plethora of technical information is presented, it is made more palatable by the many first-hand anecdotes. In fact, you may want to start with the Afterword to get a proper sense of the author. His 35 years at P&W in marketing and program management not only exposed him to the technical side of things but also honed his skills explaining them.

Moreover, upon retiring in 1983 as VP Advanced Engine Programs, Connors and another volunteer spent almost eight years reconstituting the P&W archive and this book is a direct result of that effort. It is probably useful to point out that although this book is written by a former P&W man and draws heavily on the input of P&W personnel and sources it is not an “in-house” history but an independent appraisal. Some aircraft engine books are as interesting to read as watching paint dry but this one will get and hold your attention.

The book opens with the often repeated story of P&W and adds new twists. Then we progress through the piston engines ending with the mighty R-4360, which, as the Introduction explains, had reached such a level of complexity that the advent of the jet engine came at just the right time to move into a new age. At the end of World War Two, P&W were behind with gas turbine development, however, even though they started at the back of the pack they quickly regrouped and cane up with world-beating jet engines, a legacy which continues to this day. Throughout the book much anecdotal material is provided making the story more human. Connors was instrumental in many design breakthroughs during his long tenure at P&W. There are not many books, particularly among the ones dedicated to engines were the reader gets so hooked that they cannot put it down; this one is an exception. The book is “wordy” in the best sense. Kudos to both the author and the editor to have devoted sufficient space to developing a proper narrative and context. That they are invested in giving the reader an opportunity to actually learn something is evident in the way, for instance, a specific technical problem is framed by first describing the parameters, then the pros and cons of various approaches and solutions, and summarizing in the form of conclusions, sometimes even accompanied by review questions. But none of this presented in pedantic textbook style. Rather, this book is like listening to a bunch of engineers think out loud (but without jargon-laden techno speak).

Each chapter lists references at the end, the Table of Contents shows commendable detail, and the Index is very thorough. There are hundreds of b/w archival photos and technical drawings, many of them on the small side due to the book’s 5″ width, as well as dozens of tables of specs and applications.

Even readers whose sole interest is automotive will find interesting detail here as to how P&W worked with the auto industry on the production of aero engines during WW II.

The AIAA publishes a long list of desirable and worthwhile books; members save 20% so why not consider joining?