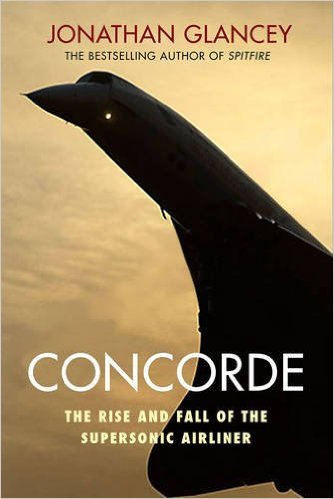 “The original aim had been for sales of perhaps 500 Concorde aircraft, while the development of a new model, and production of new supersonic airliners from other countries, pressed ahead. Production for a B model were drawn up immediately after Concorde went into service in 1976.”

1976—that would have been the year British Airways took delivery of their aircraft, following Air France the year before. And that would mean the publication of this 2015 book would have fallen neatly into the 40th anniversary celebrations. Except, there weren’t any.

To readers whose awareness of Concorde has faded over time this book has at least two things to commend itself: it is the only new one in recent years, and written by a writer/broadcaster with an affinity for design-related matters, it is a fluidly written high-level synopsis of all things Concorde.

Neither the Introduction nor the Epilogue say anything about the genesis of this book but a circumstantial case of Glancey being put around 2013 into a ruminative state of mind about the merits of the once proud British engineering tradition can be made. And while it is very clear that he has a soft spot for Concorde it is only the grammatical structure of a half-sentence buried somewhere that reveals that he cares so deeply about the Speedbird—“a sky god of its era”—that he arranged to be aboard the final flight in 2003!

No other Concorde book comes to mind that so evocatively puts keystones of the aircraft’s history in perspective: its maiden flight happened only a few weeks after that of the other iconic passenger aircraft of the time, the 747 Jumbo Jet, and the moon landing happened that same year. By then Concorde had already been on the minds, if not the actual drawing boards of aviation planners for some 20 years and Glancey ticks of all the pertinent points. With the benefit of hindsight, juxtaposing the fates of the two airliners—one 747 carried more passengers in one year than all 14 Concordes in 20—tells a big-picture story of the tug of war between politics / economics and technology.

Moreover, Glancey tells the story from both the British and the French perspective, something you will not find often and which is not easy to get right given the national rivalries. The Russian TU-144 and the whole espionage saga is also covered. Concorde pilot Christopher Orlebar who himself has penned several splendid Concorde books has kept a watchful eye on the technical bits and quite a bit of the famous 1998 “ICBH Witness Seminar” in which so many of the program’s principals participated is quoted.

But while the book is permeated with a flavor of Concorde being a failed experiment and supersonic air travel a pipe dream, Glancey ought to know full well Airbus recently filed a patent for “Concorde Mk II” (London—NY in 1 hr) and that NASA has contracted Lockheed Martin to design a quiet supersonic airliner capable of reaching 1100 mph. So, if anything, the long-term prospects looks bright‑and they make the heroic Concorde project of almost half a century ago even more heroic. (Bibliography, through Index)

One downer: in North America the book is distributed only in Canada!

Classics on the Street: An Automotive Odyssey, France 1953 »
« How To Listen To Jazz