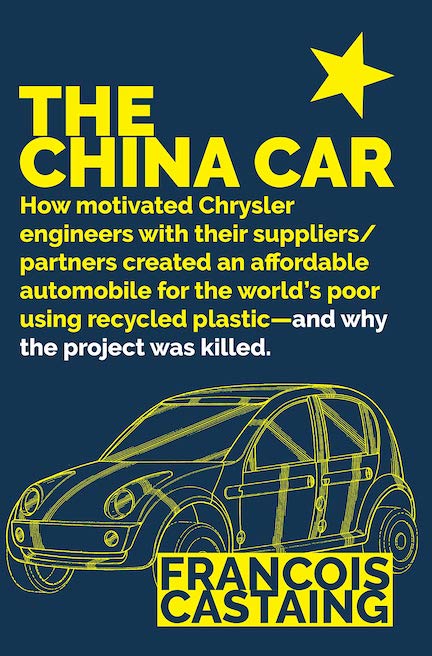 The “people’s car” was conceived prior to World War II and eventually constructed in huge numbers with Volkswagen Beetles subsequently sold in large quantities practically everywhere. This book relates a more current-day narrative about a car intended to help rural populations, especially in India and China, be able to afford four-wheeled motorized transport for the first time. That vehicle was fully developed as was the manufacturing and assembly process yet it never reached production.

The book Is of a petite size with the page count barely exceeding 100. The events it relates speak to big business, humanity and more, making it worth your time and attention to read and then contemplate.

Consider the premise. Large auto maker has an idea and puts time, effort, and money into research, then development which includes creating some truly innovative manufacturing processes as well as the enabling tooling and presses.

As the project nears fruition two things happen. This auto manufacturing company merges or amalgamates with another, with the new partnering company dominant. Some of the execs—and they coincidentally are ones who are key to the project—retire either just because they’ve “timed out” (reached mandatory retirement age) or because it becomes apparent their new partner isn’t apt to support continuation of the project despite it being on the cusp of production and with promising sales projections.

Who loses? Everyone—but especially those for whom the car was intended for it would have enabled them to be able to afford four-wheeled transportation for themselves for the first time as well as giving them a mechanized, self-operated ability to convey their produce and goods to market.

While this isn’t the first time something like this has occurred within the automotive industry, it is rare to have the story made public so comprehensively and in such detail as in The China Car. For that all credit goes to the author, Monsieur François Castaing, as he was personally and professionally involved from the start and, in fact, was the one whose suggestion initiated the project.

Although he spent his career in executive engineering positions, including corporate vice-presidency, then president, followed with being special technical advisor to Chrysler’s chairman, Bob Eaton, Castaing never forgot things he had seen and learned growing up in postwar France. He’s been quoted saying, “I saw how small, affordable cars created not just physical mobility but also social and economic mobility.”

Castaing remained personally involved even as his specific area of job responsibilities and job title changed and even into his own retirement. His career accomplishments earned him being inducted in 2010 into the Automotive Hall of Fame for “being a visionary agent who helped transform the auto industry.”

The fate of the project that came to be known as The China Car motivated him to write its story. Along with relating the concept and developments relative to this one project, every reader gains insights into day to day behind-the-scenes activities that make up the public face of an automotive corporation. It is an instructive and interesting read for all was going well, showing great progress and promise until it experienced hiccups at the market research stage, then was completely derailed by corporate mergers.

Castaing tells the story clearly and well and holds his reader’s attention from first page to last.

glossary but not indexed

John Z, the DeLorean, and Me: Tales from an Insider »
« Rolling Sculpture: A Designer and His Work